Every day at 5 p.m., Irina Mukhamedshina takes her pet fox out for a walk.

They take the elevator down from her sixth floor apartment and walk out into a snowy yard. The fox, on a leash, runs out and immediately starts tunneling into a pile of snow.

Irina's fox is named Viliya and is both a pet and Irina's dissertation project. Irina is a graduate student at the Institute of Cytology and Genetics outside of Novosibirsk, the capital of Siberia.

She walks Viliya through apartment blocks and playgrounds. The fox waits patiently to cross the street.

As they walk, groups of women coo at the fox, “what a beauty,” almost like it's a baby. Grown men stop, stare, and snap photos of Viliya. An elderly woman walking past asks, “Is that a wild animal? Or a domesticated pet?” Irina answers that the fox is somewhere in between.

In fact, Viliya is the result of decades of calculated selection to see if it's possible to repeat the domestication of a wild animal, like a wolf, into a pet, like a dog.

The experiments were begun in Novosibirsk in the 1950s by a Russian scientist named Dmitri Belayev. Belayev didn't rely on natural selection. Instead, he selected foxes based on one characteristic: whether or not they would approach humans.

Ludmilla Trut, who was a student of Belayev's and is now the director of the institute, explains that the researchers would go up to cages of foxes at a fur farm, poke a stick into the cage and see how the foxes reacted.

After just 10 years, Trut says, the researchers started to see changes. Wild foxes' tails usually stand up straight, but the foxes they selected and bred had tails that were down and even curled. They started wagging their tales. Over generations, the foxes' faces changed from pointed to rounded.

After more than 50 years, scientists are still searching for the genes that make an animal either domestic or wild. Of course, it may take a lot longer.

But another of the original goals was to see if it was possible to train a fox like a dog. And that's where Irina and Viliya come in. 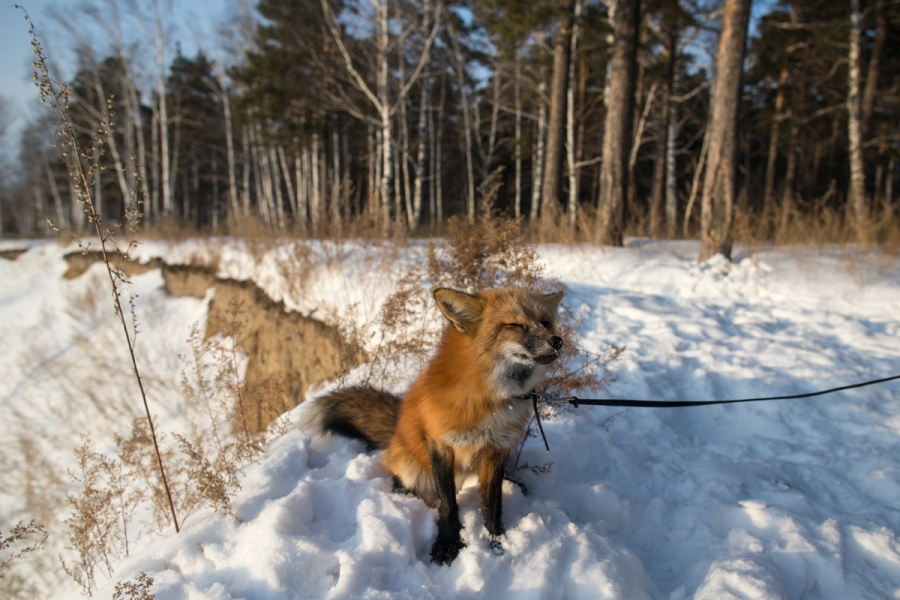 Viliya basks in the setting Siberian sun on the banks of the Ob River.

Back in her apartment, Irina cuts up some cheese and starts issuing commands.

The fox walks backwards on command. Irina makes a circle with her arms and Viliya jumps through it. Irina hides a piece of cheese behind a dresser and commands Viliya to search. Viliya finds it.

So, a tamed fox can be trained. Even so, Irina says Viliya's not fully domesticated. She explains that the foxes have been selected for 50 years for the sole quality of whether or not they were kind to humans.

Irina stresses that even though a fox can obey commands, it doesn't have the concentration of a dog.

The city makes Viliya nervous. The fox can't be left alone in the apartment. She is disobedient and not totally house-trained. Irina plans to breed Viliya and study her offspring. She wants to see how the pups will grow up, especially around dogs and people.

And it's important work because tame foxes are slowly becoming popular pets around the world. Research costs are expensive in Russia and government funding is not always easy to get, so every year, the institute sells a few of the foxes.

On her walks, Irina says people occasionally chide her for having a wild animal on a leash. But, she explains to them, Viliya is not a wild animal.

Once, on a walk, Viliya ran off and got lost. But she didn't run to the forest. Viliya went straight to a nearby house. A family let her in and Viliya began playing with their pet dog. They returned the fox to Irina.

As Irina finishes her tea, on the other side of the closed kitchen door, Viliya lies half asleep, waiting for Irina.

One quick look and you would swear she was a dog.