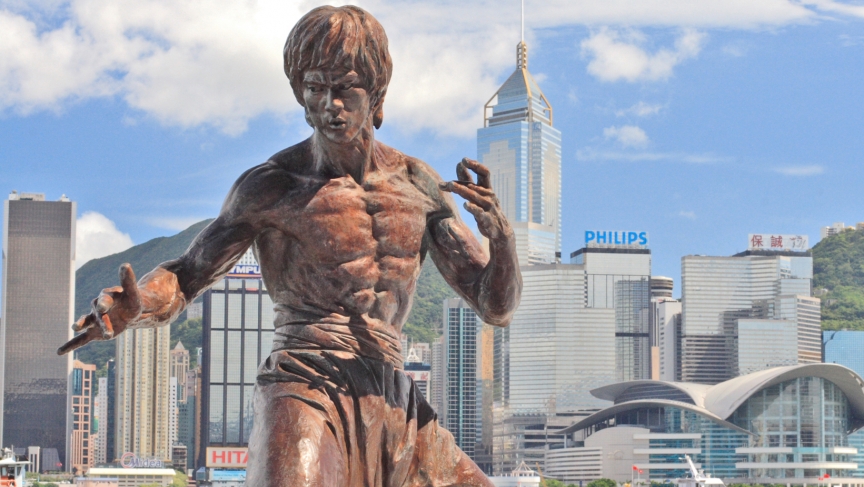 Bruce Lee is celebrated for the impact he made on western perceptions of Asian culture.

Bruce Lee had a tough road to Hollywood stardom. And while those difficulties aren't unique, they are now the subject of a Broadway play written by Tony Award-winning playwright David Henry Hwang.

The stage production tells the story, complete with dramatic martial arts-style choreography, of how Lee's brash approach to martial arts and his rejection of Asia's 20th-century culture of submission made him a symbol of Asia's rise in the 21st century. The play is called "Kung Fu," and its star is Asian martial artist Cole Horibe.

For Hwang, this project took a long time to bring to life. He says he first began thinking about the play in the early 1990s. "At that point, I thought of Bruce Lee as a symbol of the rise of the new China," Hwang says. "When I was a kid, China was considered poor and uneducated, and now, it's in a very different place. That was the symbolic thing I wanted to explore in the early 90s."

"By the time we get to this version, which I started to write two or three years ago, I also wanted to look at Bruce Lee as a human being" says Hwang, "because I feel like he has become such a recognizable icon, but nobody really knows how he became Bruce Lee. So, in some sense, 'Kung Fu' is Bruce Lee, the prequel."

In addition to China's shifting role and Lee's legacy, the play explores Asian masculinity, something Hwang says was "denigrated" in the West and in American culture. "Bruce created this new archetype — the Asian male hero," Hwang notes.

"Kung Fu" also tells the life story of Lee. Hwang says he spent the last two decades reading biographies about the action hero. "I was really pleased that Linda, his widow, and Shannon, his daughter, came to our opening night and told me that they thought it was the most authentic telling of his story that they've seen," he says.

"I think it was incredibly exciting — even now — to see an Asian man who is completely assertive, completely confident, completely masculine, and has no apologies or illusions about that. In a way, it's like Muhammad Ali in the 60s. Yes, being arrogant, but being arrogant because that was necessary in that time period and social system."

Hwang had the challenge of showing the complex and tumultuous relationship Lee had with his father. The playwright says that, at a certain point, Lee's father essentially kicked Lee out of Hong Kong and told him not to come back.

"And yet, his father ends up transmitting a lot of information that Bruce uses later in life to become the star that he becomes," Hwang explains. "It is a complicated relationship and I think it's true of a lot of father-son or parent-child relationships — you get the good and the bad."

In the play, Hwang shows Lee with his own son, "trying to transmit both good and bad, and working through that."

"Kung Fu" is at the Signature Theater in New York through April 6.