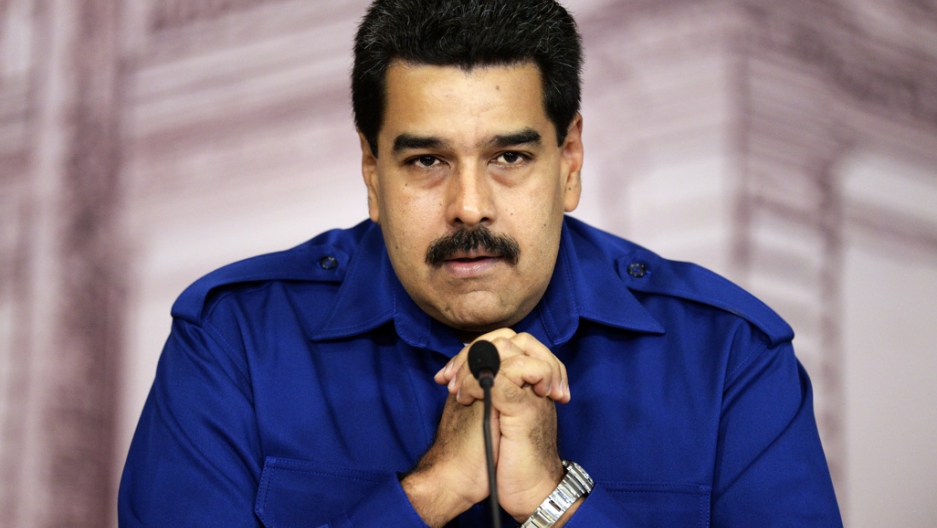 LIMA, Peru — Venezuelan President Nicolas Maduro may need to make up his mind about the United States.

The embattled leader has once again accused President Barack Obama’s administration of wanting to bump him off — and in the same breath demanded talks with Washington about “peace and sovereignty.”

Speaking before a pro-government crowd in Caracas over the weekend, Maduro alleged the United States is orchestrating the anti-government demonstrations rocking Venezuela that have claimed a reported 29 lives since early February.

“President Obama, give peace and respect a chance and let's set the foundation for a new type of relations between the US, Venezuela and, if possible, Latin America and the Caribbean,” the left-wing populist leader and disciple of the late Hugo Chavez said.

Just in case there was any doubt that he was serious, Maduro, a 51-year-old former bus driver and union leader, also warned Obama against offing him.

"It would be the worst mistake of your life to authorize the assassination of President Nicolas Maduro and fill [Venezuela] with violence," Maduro said, before adding in a friendlier tone that, like Obama, he also had “African grandparents.”

The remarks are just the latest zigzag by Maduro as he seeks to keep a lid on the protests aimed at toppling his government. Although most experts agree the demonstrators are unlikely to force him out, the economic chaos and violent crime fueling the unrest appear real long-term threats to the legacy of Chavez’s Bolivarian socialist revolution.

In recent weeks the president booted CNN en Espanol out of Venezuela for supposed bias, then allowed them to return. Just days later he gave an interview to Christiane Amanpour, a star anchor for CNN’s English-language news programs.

He also proposed a new Venezuelan ambassador to the US — the countries have not had ambassadors in each other’s capitals since 2010 — just hours after tit-for-tat expulsions of Venezuelan diplomats from Washington.

The US government has repeatedly denied any involvement in Venezuela’s unrest, accusing Maduro of putting up a smokescreen to hide his own government’s failings.

State Department spokeswoman Jen Psaki has described previous claims that US officials were instigating the protests as “baseless and false,” adding: “Venezuela’s political future is for the Venezuelan people to decide.”

Michael Shifter, president of the Inter-American Dialogue, a DC-based nonprofit that aims to promote democracy in the Western Hemisphere, dismissed Maduro’s calls as “red meat” for his supporters within Venezuela rather than a genuine request for dialogue with Washington.

“It is very hard for the US to take his calls for talks seriously,” Shifter told GlobalPost. “He has accused the US of everything. That’s not exactly conducive to a serious discussion now.”

The Venezuelan government's erratic mixture of accusations and conciliation is actually vintage Maduro — and straight out of the Chavez playbook.

Although often outlandish, both leaders' complaints about US “imperialism” have been grounded in genuine grievances ranging from Washington’s apparent backing for a failed 2002 coup against Chavez to the invasion of Iraq, which was deeply unpopular in Latin America.

Obama’s more restrained approach to foreign policy — including on Venezuela — than his hawkish predecessor, George W. Bush, appears not to have registered with Maduro, who has yet to provide proof for any of his melodramatic accusations against Washington.

Maduro’s angry tone is echoed by many other officials in his administration. Last week, Venezuelan Foreign Minister Elias Jaua, once considered among the more moderate and sophisticated senior Chavistas, called John Kerry a “murderer.”

That was in response to the US secretary of state accusing the Maduro administration of waging a “terror campaign” against its own citizens and repressing peaceful demonstrations.

That the protesters might really be unhappy with widespread food shortages, an eye-watering 56 percent inflation rate, and one of the world’s worst violent crime waves — which has many Venezuelans fearing to leave their homes even in broad daylight — also seems lost on Maduro.

More from GlobalPost: Venezuela protests are careening into a second month

From Russia’s Vladimir Putin to Zimbabwe’s Robert Mugabe, blaming foreign powers is an easy tactic for leaders accused of incompetence or authoritarianism, as Moises Naim, a former Venezuelan government minister, has pointed out.

Ironically, Maduro is upping the ante just as his government finally appears to be quelling the unrest that’s featured largely peaceful marches in cities across the country by day, and barricade-building and Molotov cocktail-throwing by a harder core of militants by night.

On Monday morning, security forces used water cannons and tear gas to clear Caracas’ Altamira Square of protesters. The plaza has been at the heart of the demonstrations and a powerful symbol of how life in Venezuela right now is anything but normal.

The protests have also split the opposition.

More moderate critics of the government, such as Henrique Capriles, who narrowly lost last April’s presidential race to Maduro, warn that the protests — mainly in middle- and upper-class districts — are undermining efforts to recruit the poor. Poor people revere Chavez’s legacy but their loyalty to his successor is being sorely tested by the economic chaos.

Others, such as Venezuelan economist and blogger Francisco Toro, go further than that and believe the protests have played straight into Maduro’s hands.

“The ruling clique grasps that it can’t fix the underlying sources of social discontent,” Toro argues. “Its hopes are centered instead on manipulating how people apportion responsibility for the mess.”

With the military loyal, and the courts and congress under his thumb, most experts predict Maduro will ride out the current wave of unrest. At some point, the protesters may also give in as they see that the president’s grip on power is as tight as ever.

Yet trouble remains on the horizon for Venezuela.

The demonstrators may be on the back foot for now, but the economic and public safety crises that drove them into the streets remain as bad as ever, and may yet worsen. Some commentators are even warning of the risk of civil war.

“Maduro and the people around him are aware that the economic situation is critical and may be deteriorating,” Shifter said.

“They have taken some measures but they are not going to be sufficient. If people are going hungry then that is going to continue to drive the protests.”

And despite Maduro’s histrionic accusations, Washington this time is largely a bystander as Venezuela hovers on the brink.