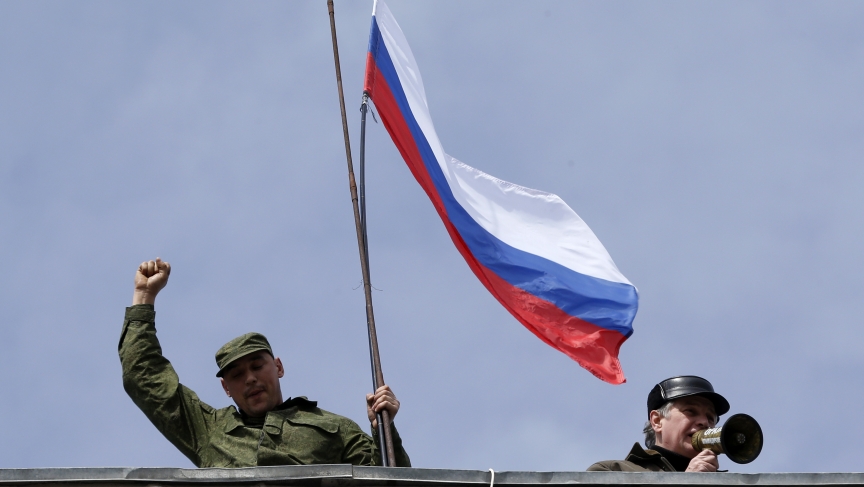 The Russian flag being hoisted over a Ukrainian naval facility in the Crimean city of Sevastopol, after the base was forcefully occupied, Wednesday.

President Obama and other western leaders have repeatedly said the secession of Crimea from Ukraine is illegal — and not just under Ukrainian law, but under international law.

Russia's Foreign Ministry says that argument is "strange, illogical and legally ignorant." So who's right?

"The issue is not the vote in Crimea," says Sean Murphy, a member of the UN International Law Commission. "It's how the vote came about."

Russia used its military forces to bring about the referendum in Crimea, which then led to its annexation to Russia. Murphy says, "that makes the outcome tainted."

Murphy is an experienced international lawyer who has represented the United States in many cases and now teaches at George Washington University. He says you have to be careful about looking at events today based on precedents from before 1945. Take, for example, America's own secession from the British Empire in 1776, during the American Revolution. "It's back in a time when the rules of international law were quite different," he says.

Those times, he says, "culminated ultimately in two world wars, that no one wants to see repeated. So in 1945, we adopted the UN Charter with a very core rule about no trans-boundary use of force. Article 2 (4 ) of the UN Charter says that no state may use force or threaten to use force against the territorial integrity or political independence of any other UN member state," Murphy explains.

And that's why Russia's military intervention in Crimea taints the entire secession. And that, Murphy says, makes this a very serious incident.

"It's the first time we've had a European nation essentially ... take steps that have brought about the transfer, the purported transfer — wholesale — of territory from one country to another."

"This," Murphy concludes, "is not a world we want to live in."