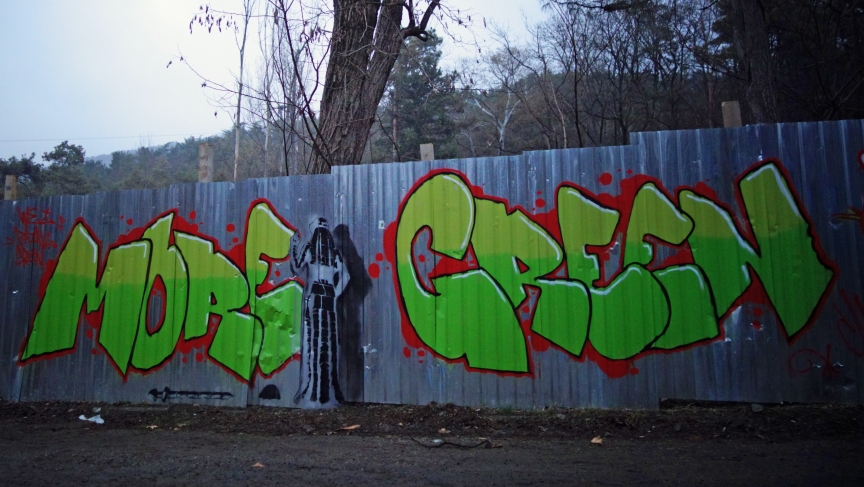 Tbilisi’s “Guerrilla Garden” movement has been fighting to preserve the city’s green spaces that some say are under threat by private developers in cahoots with city officials.

In the country of Georgia, a small group of self-styled "guerilla gardeners" are all that’s standing between a city park and a luxury hotel development. It is a new kind of protest movement for this former Soviet republic.

Since January, activists have been keeping a 24-hour vigil in frigid weather to keep bulldozers from rolling into Vake Park, one of Tbilisi’s grandest green spaces, adjacent to the city’s leafy university district. It is a peaceful public common, much like New York City’s Central Park, where young people throw Frisbees and grannies walk stout lapdogs.

“The story going on here goes in all of the parks of our city,” says 25-year-old activist Data Lapauri. Pliant public officials, he says, are giving away more and more public spaces to fat-cat developers.

In this case, a company wants to slice off part of this park to build a luxury hotel. Lapauri says if the public loses Vake Park, there’s no telling what’s next. And if they win?

“This is Central Park, so if we win here, we win everywhere," Lapauri says. "Basically this clash is between parks or concrete.”

A bunch of kids protesting in a park may not seem especially monumental. Georgia did, after all, stage the Rose Revolution in 2003, which swept a corrupt regime from power and put the country on a democratic course.

But that movement was directed by political parties headed by powerful, charismatic leaders — not by a spontaneous groundswell of public sentiment.

The guerrilla gardeners are different. They've watched grassroots groups in places like North Africa over the past several years, and figure that if people can bring down dictators, they can protect a park.

“This is probably the first case in the history of Georgian civil society where people are protesting to defend the environment — and this has to do nothing with political parties or any political powers,” says activist Tea Kuchukhidze. “We’re defending the park and, through that, we’re defending our right to live in a healthy environment.”

Unlike with large, politically-motivated demonstrations, Georgian authorities can’t seem to figure out how to deal with the Vake Park group.

They’ve tried to crack down several times. But each time they did, says computer engineer Nick Davitashvili, a few blasts on social media would conjure up around a thousand demonstrators to stare down police and the Earth-moving equipment of demolition crews.

“The younger generation can see that by responding to the tweet and coming and standing here, they are actually changing something,” Davitashvili says. “They can turn away the police just by standing here, not fighting, not screaming at them, maybe playing music or dancing. They can feel that power and that is a deciding factor to make people understand that it’s in their hands. If they come, things will change for the better — if they don’t, they should blame themselves.”

Authorities say the hotel project isn’t actually in the park. These demonstrators say that’s bogus and are taking the city to court. In the meantime, Data Lapauri says he’s optimistic that reason will prevail.

“They know we are right but they also know that it’s not only one case, and if we win here we will not stop here; we will try to bring more positive changes,” he says. “They do try to make us look like we are extreme, that we are treehuggers who cry on every single tree that is cut — which is very far from reality.”

Lapauri and others say this may seem like “just another protest,” but Georgian officials won’t be able to disregard grassroots revolutionaries any more.