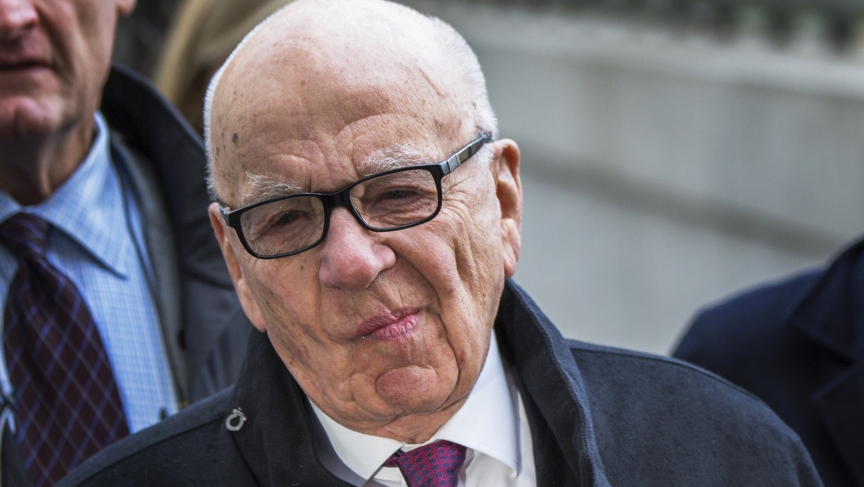 Rupert Murdoch called for an Irish boycott of Guinness beer.

The folks at Guinness decided to withdraw their sponsorship of Monday's St. Patrick's Day parade in New York City, after organizers decided to bar LGBT groups from marching in the annual event.

That didn't sit well, according to Europe's Pink News, with one particular Aussie: Rupert Murdoch. The Australian-American media mogul, owner of the Wall Street Journal, the Fox News Channel and various other global media outlets, took to Twitter to blast those who "bullied" the parade sponsors. Apparently, if Guinness boycotted the parade because of its exclusion of gays, Murdoch felt he should boycott Guinness.

If he was hoping for a sympathetic response, he didn't get it. No word if Guinness consumption dropped on Monday, but it seems unlikely.

Will your next pair of running shorts come with a built-in computer?

Folks in the UK had a chance to check out the latest clothing on Tuesday — but this show had nothing to do with fashion. It was all about wearable computers: cycling shorts that can measure every muscle movement, jackets that monitor your heart rate and transmit the data to your smartphone in real time, even wristbands that can tell you if you've spent too much time in the sun.

None of these devices are cheap, and the Independent reports they are all jockeying for a slice of what is projected to be a bllion-dollar industry in coming years. Wearable technology, like FitBits and the like, are already moving into the mainstream. Some project more than 70 million wearable devices will be sold each year by 2017.

The situation in Venezuela is grim. Protests continue and grocery store shelves are often bare of essential items. But President Nicolas Maduro has a solution for the latter problem: a national groccery ID card.

His government touts it as being "just like" the loyalty cards you can at Kroger or any number of groccery chains around the world. But journalists and others believe the program will help the government zero in on people it believes are "hoarding" goods, allegedly leading to shortages. Some are concerned the card will be a step toward full-scale, Cuban-style rationing. PRI's The World has more.

There's more than one way to cross a river

Vietnam has a bridge problem. In many cases, the country's bridges are unreliable — if they exist at all. According to the BBC, a suspension bridge collapsed in Lai Chau Province causing nine deaths.

A primary school teacher in the country made a video of her school's solution: pile children into plastic bags and have adults carry them across the river, according to a post on the BBC Trending blog. Even teachers have taken rides across the river in plastic bags.

Sometimes, there's nothing left to do but laugh

Thailand has been embroiled by protests for months, and the government is on edge. In a country with limited press freedom, how can journalists cover the news? Turn to humor, it seems.

Thailand's "Shallow News in Depth" seeks to cover all the problems in Thailand today, without incurring the wrathe of government officials. Rosie Wongsurawat, the lead writer for the show, tells PRI's The World that comparisons to Jon Stewart and The Daily Show are flattering, but not entirely correct. She compares the program to more of a cartoon — with the two "anchors" shouting out lines over goofy graphics and sound effects. You can check out the video at PRI.org.

An ice storm is set to make driving in parts of Ontario tricky on Wednesday, according to a report from the Stratford Beacon-Herald. An area east from Lake Huron to Central Ontario is expecting freezing rain, with areas further east likely to see a mix of ice and snow.