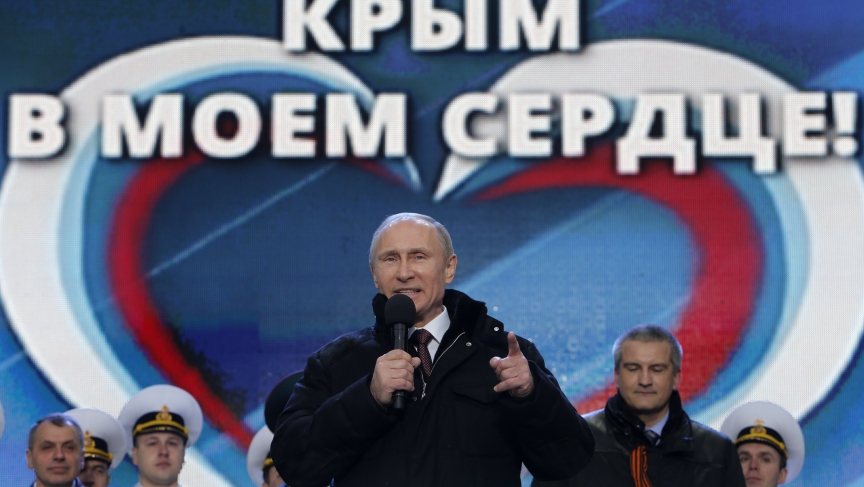 Russia's President Vladimir Putin addresses the audience during a March 18 rally and a concert in Moscow called "We are together" to support the annexation of Ukraine's Crimea to Russia. Defying Ukrainian protests and Western sanctions, Russia signed a treaty on Tuesday making Crimea part of Russia. The words in the background read, "Crimea is in my heart!"

It all happened in the blink of an eye.

Speaking in the Kremlin's St. George Hall, Putin dipped into Crimea's historical ties to Russia, again and again. He pointed to the religious bonds and the battles shared under the early Slavic Princes. He spoke of “The Ukraine's" position as Russia's brother nation within the Soviet Union. And he questioned the decision made by Soviet Premiere Nikita Khrushchev to gift Crimea to Ukraine back in 1954.   Never in our wildest dreams, Putin said, would we have thought that we’d one day be under different governments

“Crimea has always been an integral part of Russia in the hearts and minds of people. This is a conviction passed down on the basis of truth and justice from generation to generation,” he said.

Putin also took the opportunity to pack in complaints — most of them directed at the United States. He accused the US of fomenting unrest in Russia and Ukraine; for creating a double standard in pushing for independence of Kosovo but not recognizing the Crimean referendum; and for meddling in the Middle East. And he complained that the US had deceived Russia about the expansion of NATO deep into eastern Europe.

At the time, Putin said, a weakened Moscow had no choice but to “lower her head” and accept the terms. But no more. He said Russia is back and strong.

“Russia is an independent country active in the international arena,” Putin said. “And like other countries, it has national interests that need to be taken into consideration and respected.”

Those include defending the rights of ethnic Russians, he said.

With that, Putin's history lesson went into warp speed. A table was pulled out, trumpets blared and members of the new pro-Russian government in Crimea quickly signed papers. Crimea and  the city of Sevastopol became new members of the Russian Federation.

For some people, the speed of change has been dizzying.

“Today, the Russia we spent the past 23 years living came to an end, the Russia that, sometimes loudly, sometimes quietly, rejected its imperialist Soviet past,” said Fyodor Krasheninnikov, a political analyst based in Ekaterinburg. “Unfortunately, today we returned right back from where we came. Today, we saw Putin express the grievances of his generation, a generation that is nostaglic for the Soviet period.”

Putin did say he had no desire split Ukraine. But pro-Russian groups in eastern Ukraine — particularly in the Donbass region — have appealed to join the Russian Federation, along with Crimea. And Russian Duma members announced they’re considering a request by Transnistria, Moldova’s breakaway region, to join Russia as well.

If Russia decides to act on any of that, there’s not much the West can do about it, Krasheninnikov added.

Western governments on Monday introduced a range of sanctions and visa restrictions targeting top Kremlin officials. But many of those targeted have been shrugging them off.

Vladislav Surkov, an advisor to Putin, noted he didn’t need a US visa to enjoy the things he loved about America — like rapper Tupac Shakur, beat poet Alan Ginsberg and abstract painter Jackson Pollack.

With Crimea now a part of Russia  and calls growing from other areas to join the Russian fold, a new picture was taking shape, one where the Kremlin finds it okay to paint outside the lines.