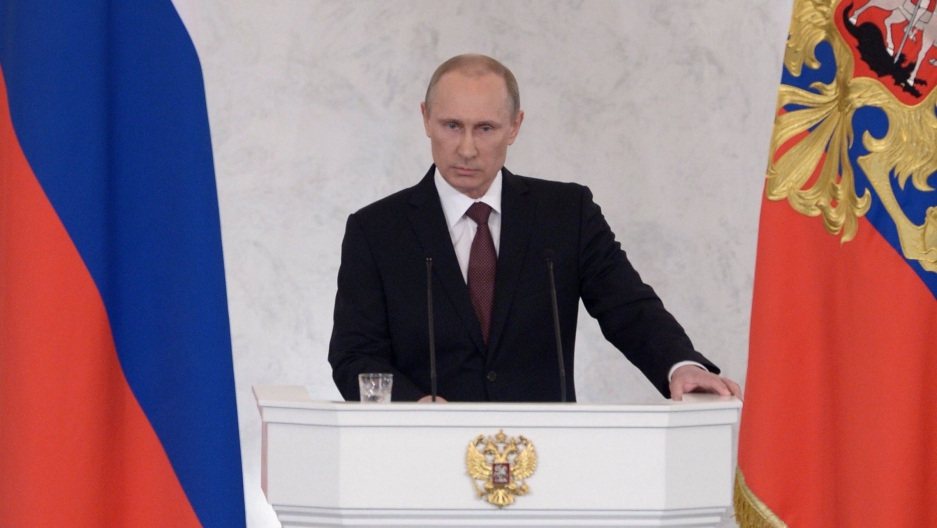 Talk about a new Cold War: Vladimir Putin’s speech on Tuesday announcing Russia would annex Crimea was a virtuoso exercise in Soviet-style propaganda. Speaking forcefully and with a straight face, the Russian president characterized his country as peaceful and cooperative, under pressure only for trying to defend democracy in Ukraine from a selfish, aggressive, hypocritical West.

“They cheated us again and again, made decisions behind our back, presenting us with completed facts,” he said of the two decades since the end of communism. “That’s the way it was with the expansion of NATO in the east, with the deployment of military infrastructure at our borders. They always told us the same thing: ‘Well, this doesn’t involve you.’”

Looking back centuries in history to justify seizing Crimea, he dredged up the myth that Russia and Ukraine are basically two parts of a whole and rattled off a list of Russian grievances from the Soviet collapse in 1991 to NATO’s bombing of Serbia in 1999 and the toppling of Libyan dictator Muammar Gaddafi three years ago.

Deftly discharged in front of Moscow’s political elite inside a gilded Kremlin hall, Putin's insults, lies and bold historical revisionism were nothing new from the man who once compared the United States to Nazi Germany.

The difference now is that his words are no longer mere campaign-style rhetoric but the driving force behind Moscow’s military seizure of Crimea, which turned deadly today when a Ukrainian officer was killed by pro-Russian gunmen.

Meanwhile, the Kremlin is reported to be whipping up separatism in Donetsk and other cities in pro-Moscow eastern Ukraine that have seen violent protests and beatings. Russian forces are also massing on Ukraine’s borders while Kremlin officials say they reserve the right to intervene to protect Russians living there. Those dangerous actions threaten far worse violence, perhaps even civil war. Even if the worst can be avoided, the consequences for Ukraine could last decades or more.

Despite Putin’s challenge to European values and security, a rising tide of commentary is urging Western leaders to moderate their response, arguing that sanctions would have little effect, that they’re not in their interests, or both. After all, the logic goes, Moscow says it’s not interested in invading eastern Ukraine.

However, any optimism about the efficacy of reasoning with the Kremlin betrays a fundamental misunderstanding — driven by an overwhelming desire to see Russia as a “normal” country — of Putin and the nature of his rule. For many in the West who want the crisis to just go away as soon as possible, taking Moscow at its word offers the easiest solution. But it’s actually the worst approach because it’s exactly what Moscow wants.

Part of the difficulty foreigners have understanding Putin’s motives is that unlike Western leaders who tend to act in the interests of their countries, he makes decisions that are solely in his own interest. Although it would benefit Russia for Ukraine — where many people speak Russian and share closely intertwined histories and culture — to become a secure, prosperous trading partner and ally, Putin’s overriding goal is to exploit Kyiv for confronting the West.

His invasion was the equivalent of raising a middle finger to Ukraine’s new leaders for helping oust the criminal pro-Moscow President Victor Yanukovych, who prompted the protests against him by rejecting a deal with the European Union in favor of closer ties with Moscow. It resembles schoolyard bullying with thugs brandishing guns and a rationale of protecting Russian-language speakers from an invented threat of Ukrainian Fascism that’s little different from Adolf Hitler’s justification for seizing Czechoslovakia’s Sudetenland in the 1930s.

That gets to the heart of the impasse over Ukraine. Where the West sees a terrible crisis, Russia sees its moment in the sun. What could be more flattering than split-screen images on satellite television of Putin beside US President Barack Obama, whom Putin’s propaganda machine has made out to be Russia’s greatest enemy?

That’s popular at home because it shows Putin to be tough in a country where many envy the West. Like many forms of nationalism, Russia’s is stoked by an inferiority complex, in this case a belief the West doesn’t accept Moscow’s importance.

Those who would argue against “provoking” Putin in the mistaken belief that overlooking enough of his actions may encourage him to compromise are playing right into the hands of a leader for whom stoking the conflict in Ukraine — not resolving it — is the ultimate goal.

Unchecked, Putin’s aggression probably won’t end in Crimea. That should have been the lesson after Western countries failed to take significant measures to censure Moscow for its 2008 invasion of Georgia, where it still maintains thousands of troops in two breakaway regions in violation of an EU-brokered ceasefire. If the West fails to punish Putin now, he’ll surely take that as more encouragement, perhaps to target Moldova, another former Soviet republic the Kremlin wants to divert from joining the EU by supporting another pro-Moscow separatist region there.

EU leaders are expected to agree to more sanctions in addition to the toothless ones already enacted during a summit later this week. But with the union divided among 28 members, the coming days and weeks are Obama’s moment to redeem his foreign policy by taking the lead with resolute, Churchillian action to support Western values and interests. Not to act decisively would constitute appeasement because Moscow, which sees dialogue as a sign of weakness, has no intention of compromising, as Putin made abundantly clear today.