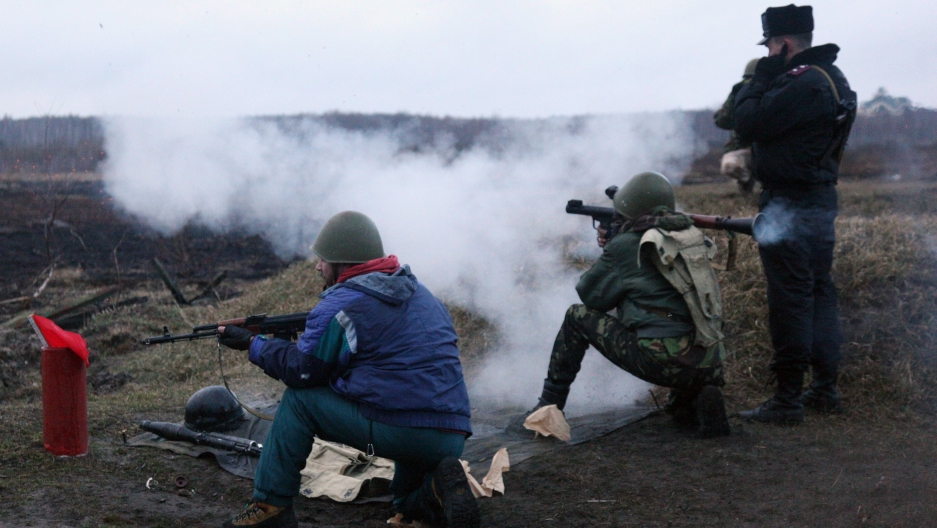 Ukrainian military recruits during a shooting exercise near Kyiv on Monday after parliament approved the partial mobilization of troops to counter "Russian interference" on its soil.
Credit: AFP
Share

Since people in Ukraine’s Black Sea peninsula of Crimea voted to join Russia in a referendum on Sunday, fears are growing that Russian President Vladimir Putin will boost efforts to destabilize other regions in the largely pro-Moscow east of the country.

On Monday — in spite of protests from Kyiv that Crimea is not for the taking — Putin signed a decree recognizing the region as a sovereign state. Russian parliament is expected to vote this week on Crimea's application to join the Russian Federation.

With Moscow dismissing moves by Western countries to enact sanctions against Russia, GlobalPost’s Europe editor Gregory Feifer talks about what may come next.

GlobalPost: What exactly is happening in eastern Ukraine?

Gregory Feifer: Reports say that part of the country is crawling with Russian special forces seeking to whip up separatist sentiment. We’ve already seen pro-Russia protesters storm government buildings and hoist the Russian flag as well as beat rival pro-Ukraine demonstrators, killing at least one and injuring many more.

I believe that far from pressuring Putin to ratchet down the tensions, the sanctions enacted against around 20 Russian and Ukrainian officials in connection to Moscow’s invasion of Crimea on Monday will be seen as weak — and actually reinforce his actions as a signal of their success.

Some believe he wants to annex eastern Ukraine because he’ll need it to supply Crimea, which is cut off from Russia by sea and gets most of its energy and supplies — natural gas, water and electricity — from the rest of Ukraine. Last weekend, Russian soldiers attempted to seize a gas plant in Ukraine just across the de facto border with Crimea, which was seen as evidence of Putin’s intentions.

However, I don’t believe he has an endgame at this point. Whether or not he’ll risk taking eastern Ukraine — and I think he’s at least partly driven by emotions at this point — one thing is clear: he’d rather the country erupt in civil war than become a stable, Western-looking democracy. His main interest right now is to destabilize the current authorities by provoking hatred and violence and blaming the “fascists” the Kremlin says are running the interim government.

Many people in the West can’t understand why Putin would want to blacken Moscow’s image by fomenting civil war in Russia’s southern neighbor — something that can’t possibly benefit Russians. Like Putin’s Soviet foreign policy models, however, he believes that to be feared and loathed in the world means to be respected. He likes being seen as a tough guy.

However, his main audience is domestic. Showing himself to be strong by forcing a confrontation with the West plays on nostalgia for Russia’s lost superpower status among his core constituency of conservative voters. It distracts the population from Russia’s myriad problems at home, and it’s working: Putin’s approval ratings are rising even as he oversees yet another crackdown against independent media.

With that kind of feedback, and with the Kremlin isolating itself more from the international community every day, it becomes more likely Russia will meddle in or invade eastern Ukraine.

Gregory Feifer is Europe editor for GlobalPost. His new book is Russians.