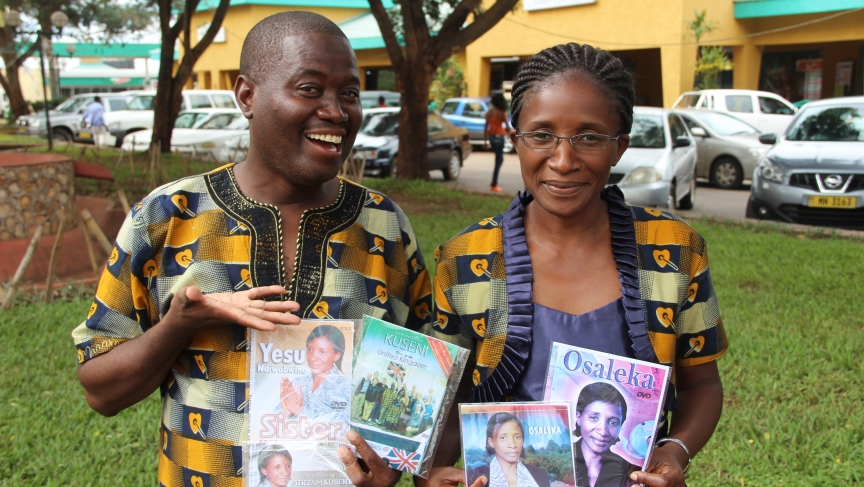 Frank and Miriam Kuseni are gospel artists based in Lilongwe, Malawi. They were forced to stop selling their CDs on the street.

Music piracy can make life difficult on musicians. But sometimes attempts to combat piracy can hurt artists, too. That’s the situation in the southern African nation of Malawi.

Frank Kuseni is from what he calls “a gospel music family.”

Kuseni met his wife, Miriam, when they were singing together in a church choir in the capital, Lilongwe, in 2007. They got married and decided to pursue a mutual lifelong dream — to become professional gospel singers.

Like many aspiring artists, they were unable to get a professional recording contract, in part because the recording industry in Malawi is small and has been hurt by piracy. So Frank and Miriam paid for studio time and produced two albums on their own. Frank soon began selling the CDs on the street.

Until he ran into a problem.

“One day, the police came and said, ‘No, you should leave this place, or else we will confiscate your music,’” Kuseni said.

The problem was that his CDs didn’t have a silver hologram — the official insignia that proves they aren’t counterfeit.

Kuseni was taken aback. “I said [to the police,] ‘I am the musician, I produced it, why should I have a hologram?’”

But the police officers insisted that he stop selling on the street. So he complied.

The difficulty of enforcement

Frank’s story isn’t that unusual in Malawi, a country where music piracy is widespread and many people get their music on CDs.

The Copyright Society of Malawi is an organization tasked with protecting copyright laws. In its headquarters, there is a crowded storage room filled with computers and stacks of confiscated CDs, many of which have covers that are obviously fake.

One disc has a picture of the Irish boy band, Westlife, with the photo blurred and faded — printed on low-quality paper.

Rosario Kamanga, a program manager at the society, said that as music piracy has grown in Malawi, his organization has increased raids on street vendors. In the process, it has confiscated CDs from many musicians selling their own work.

Kamanga said he has great sympathy for struggling artists like the Kusenis.

“To sell his own music, there’s nothing wrong with that,” Kamanga said. “But to sell it without the hologram — the law says it’s illegal.”

To understand why, Kamanga said, look at it from a law enforcement standpoint. How do the police know that the person selling music on the street is actually the artist?

Or what about this situation, which Kamanga said he frequently encounters — a person selling choir music and claiming to be in the choir.

“Does he have the authority from the whole choir?” Kamanga asked. “Probably not.”

There are just too many ways to cheat artists out of profits, Kamanga said. So the solution is for everyone who sells music to register and pay for the hologram.

Frank Kuseni said he and his wife looked into paying for the hologram, but decided against it. He said they make the equivalent of just 25 cents per CD, and the hologram costs 15 cents. In other words, it eats up more than half their profits.

So Frank and his wife decided on another strategy. Every Sunday, they perform gospel music at one of the many churches in Lilongwe. After the service, they sell their CDs — without the hologram.

Frank said sales have been good. And, so far, the authorities haven’t confronted them. “The city officials don’t go [on church grounds] to chase us,” he said. “I think that those places are out of bounds.”

Kuseni said he and his wife hope to get a recording contract someday, so that someone else can worry about copyright issues. In the meantime, he said, they’ll keep playing the church circuit — and praying for guidance.