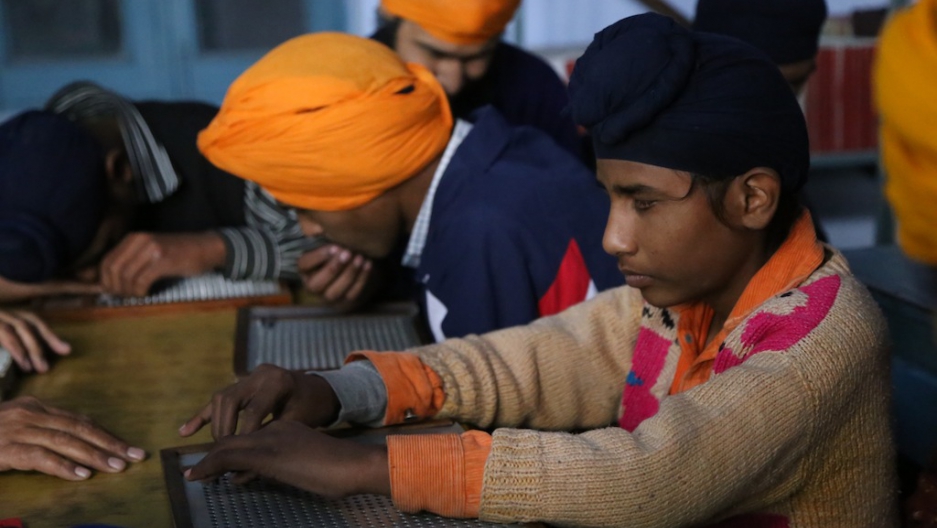 Paras, an 11-year-old boy, reads a book by moving his fingers along the text in Braille at the school for the blind, Central Khalsa Orphanage, Amritsar India in January 2014.
Credit: Harman Boparai
Share

AMRITSAR, India — Harpreet Kaur, 13, prefers to sit in the front row of all her classes. She likes playing with her friends and watching her favorite shows on TV, like any teenager in her hometown. But in January, she noticed that she was not able to make out the images on the TV, even when she sat right in front of it. Her father took her to the eye hospital, and there doctors found that her vision was seriously impaired, and probably had been for a few years.

In most of the world, the leading cause of blindness is cataract, usually affecting people over the age of 60. But 8 million people are blind due to what’s called ‘refractive error,’ when the eye cannot clearly focus images, a condition that usually crops up in childhood. It is a very common visual impairment that is entirely preventable by wearing the right eyeglasses or contact lenses, but worsens without appropriate correction. If corrective lenses are not prescribed early, there can be irreversible loss of vision.

Uncorrected refractive error is one of the most common causes of reversible blindness in India. Studies in the southern state of Andhra Pradesh suggest that more than 49 million people over age 15 may have refractive errors.

I was introduced to Harpreet when I visited colleagues at the Regional Institute of Ophthalmology in Amritsar, where I had trained during medical school. When doctors examined her eyes, they found Harpreet’s vision was less than 6/24 in each eye, meaning that she could see at 6 meters what people with normal vision could see at 24. More distressing was the fact that even with eyeglasses, her vision would not be corrected fully. Substantial damage to her eyes had already been done.

“As a child grows older, it gets harder to correct the vision fully with spectacles,” said Shaurya Sharma, the resident ophthalmologist who examined her. If the brain is denied vision due to any cause for a prolonged period of time, its visual pathways don’t develop, leading to permanent visual loss.

The World Health Organization estimates that 153 million people worldwide live with visual impairment due to uncorrected refractive errors, 8 million of whom are blind. In 1999, the international health agency issued a roadmap for eliminating preventable blindness by 2020, along with 20 international NGOs. Although the plan, Vision 2020, imposes a mandate to correct refractive errors, there are inadequate infrastructure and human resources available to follow through on it in many developing countries. In much of sub-Saharan Africa, for instance, the ophthalmologist-to-population ratio is around 1 for every million.

While access to general medical services is possible for about 25 percent of populations in developing countries, access to medical eye care, including refraction correction, is only at about 10 percent.

Out of 23,000 primary health care centers in India, only 40 percent are equipped to provide refractive services. And while established government programs for screening school-aged children for vision problems have helped identify many suspected cases, they primarily rely on school teachers with minimal training to screen the students and refer them.

There is also a lack of community awareness about vision impairment that prevents timely treatment.

“A lot of the problem of late reporting is due to widespread ignorance of the consequences of refractive error,” said InderJeet Kaur, an associate Professor of Ophthalmology at the Regional Institute. She added that public health education could go a long way in addressing the problem.

While the cost of corrective glasses is usually less than $5, an amount that most people can afford, the costs of ignoring the problem are tremendous, as 35-year old Tarsem Singh knows well. He never had his refractive error corrected and now is blind in one eye, with a vision of less than 6/60.

While in Amritsar, which happens to be my hometown, I also visited the school for the blind at the Central Khalsa Orphanage, the only such school in the city. Studies carried out in schools for the blind in India and Zimbabwe have reported that refractive error and associated visual problems are responsible for 3 to 5 percent of blindness among the students.

At Central Khalsa Orphanage there were 35 blind children, ranging from 7 years of age to 20. One of them, Paras, age 11, read aloud a book to me about the history of Punjab by moving his fingers along the text in Braille.

I wondered if Paras or any one of the other kids were now blind because of an undetected refractive error — a problem which could have been corrected easily with glasses.

More from GlobalPost: Location matters for child health in India