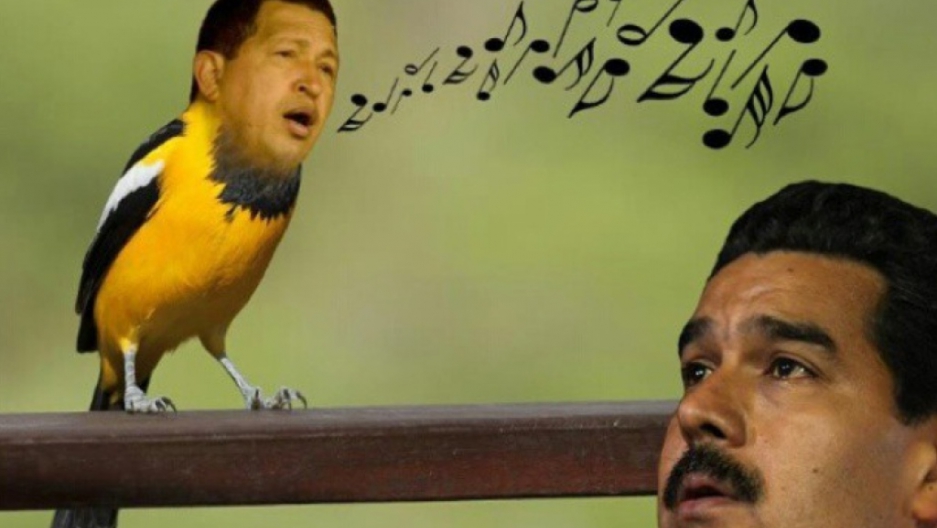 One of the many illustrated memes that zoomed around the web after Nicolas Maduro said the late Hugo Chavez had appeared to him as a chirping bird.
Share

LIMA, Peru — Economic meltdown, a tsunami of violent crime, and weeks of anti-government protests may be the least of Nicolas Maduro’s problems.

The Venezuelan president also has a knack for the kind of oddball public statements that suggest a loose grip on both reality and the Spanish language.

Here, GlobalPost rounds up 10 of the best “maduradas,” as Maduro’s verbal gaffes are known in his homeland.

“They inoculated Commander Chavez with that illness to get him out of the way, and create a situation of destruction for Venezuela and its independent revolution.”

Suggesting last August that the United States gave the late President Hugo Chavez the cancer that killed him a year ago, a medical impossibility according to most experts.

More from GlobalPost: Maduro says to Obama, give peace a chance, don't kill me

“There is a nymphomania of dollars in many sectors [that is] impossible to satisfy.”

Last June, apparently blaming the pressure on Venezuela’s fixed exchange rate on sex addiction. The country's shortage of US dollars — which Venezuelan businesses use to import goods — has led consumer prices to soar.

3. Chavez returns from the grave — as a cute little bird

“Suddenly a teeny little bird entered and flew around me three times. It landed on a wooden beam and began to whistle, a beautiful whistle. I stayed there looking at it and also whistled. 'Well, if you whistle, I whistle.' So, I whistled. The little bird looked at me strangely. It whistled for a short while. Flew around me once and left, and I felt his [Chavez’s] spirit.”

Claiming last April, just days before winning the presidential election in which he was running as Chavez’s political heir, that the late leader had returned to him in the form of a tiny, chirping bird.

“Sometimes I come at night, sometimes I sleep here, often. You don’t even realize it. The neighbors sometimes realize.”

Claiming to sleep on Chavez’s tomb as a source of inspiration, last August, as Maduro’s fixation with the "Comandante" turned from political to, well, downright icky.

“Something influenced the choice of a South American pope. Some new hand arrived and Christ said, ‘Well, South America’s time has come.’ At any moment, he will convoke a constituent assembly in heaven to change the church in the world, and let it be just the people of Christ who govern the world.”

Last March, claiming that the recently deceased Chavez had played a role from up above in the naming of Latin America’s first ever pope — and may even be continuing his “Bolivarian” socialist revolution on Earth from heaven.

“This boy who at 14 is carrying a 9 mm pistol has his brain full of thousands of hours of broadcast series in which people kill people. These days we are watching Spider-Man 3 … It is one of the series that young children most like.”

In September, blaming Venezuela’s horrendous violent crime on TV and, above all, Peter Parker’s masked alter ego, who is actually best known for fighting the bad guys rather than being one.

More from GlobalPost: 5 myths about the Venezuelan crisis

Spectacularly mangling the Bible last August. In fairness to Maduro, this one was a slip of the tongue, and he instantly corrected himself. The explanation for his stunning blooper is that, if you mix the Spanish words for the plural of fish and bread, “peces” and “panes” respectively, you get something close to the word for penises, “penes.”

“I have a wife. Listen, I like women. How good is the kiss of a woman, right?”

On the campaign trail in March 2013, Maduro made homophobic insinuations against his opponent Henrique Capriles, who is neither married nor known to be dating anyone.

9. Syria is a cover for his assassination

Last August, making one of his regular claims — for which he never provides proof — that the United States is planning to assassinate him.

“We need to reduce extreme consumption to achieve a point of equilibrium between supply and a fair price. I trust in the hardworking majority of this country.”

Coming out with a novel solution to Venezuela’s endemic food shortages last month — get demand in step with falling supply by eating less.