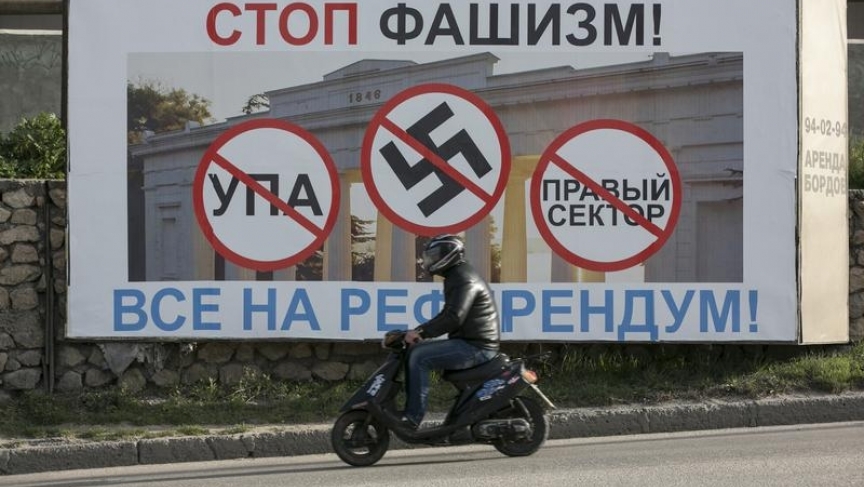 A billboard urged people to vote in Crimea's referendum. The poster reads, "Stop fascists everyone, come to the referendum."

Extremists of all sorts surfaced last month when Ukrainians in Kiev toppled their government. During the turmoil, someone unfurled a white supremacist banner and a Confederate flag inside Kiev's occupied City Hall.

And some of those running to be Ukraine's new president occupy the political fringe, like the far-right, newly-appointed deputy director of Ukraine's security council, Dmytro Yarosh. He is renowned for his expertise with firebombs and travels with black-clad bodyguards.

So Russia has some fodder to argue that Ukraine's revolution is being led by a bunch of fascists who will persecute ethnic Russians at their first opportunity. And those extremist groups are the ones that Russia claims the US is backing.

"When you hear these words, 'Nazis and extremists,' these are not the people in power in Kiev," McFaul says. "There are lots of different factions involved in the 'opposition.' And they should be judged by their actions — whether they respect the rule of law, whether they respect the constitution and the democratic rules of the game. And those that do not should be excluded from the democratic process."

McFaul points out that Ukraine's new acting president and the acting prime minister have been elected officials for many years.

In fact, the far-right figures are not what's worrying the former US ambassador. Instead, he's focused on the possiblity of increased violence in eastern Ukraine.

"Having Russia get involved militarily in eastern Ukraine would be a true tragedy, because you'd have war in Europe again. And I'm worried about that," McFaul notes.

"Europeans and the rest of the world should also be worried about that."