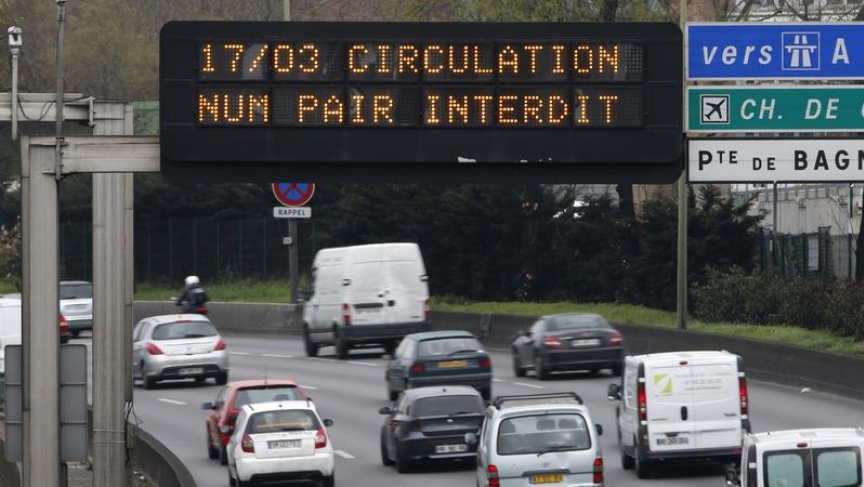 Parisians are breathing a little easier Monday, quite literally.

An air pollution emergency over the last few days is abating and life is more or less returning to normal.

The BBC's Paris correspondent Hugh Schofield says the air had already started to improve over the weekend after "really bad days" on Thursday and Friday. But officials nonetheless imposed alternate — or "odd/even" — driving restrictions for Monday as a precaution against a resurgence of dangerous levels of particulate smog.

On Friday, the city made its Metro rail system and car and bike share programs free for the duration of the crisis.

The smog emergency started last week when a stalled high-pressure system cut down on air circulation and trapped vehicle exhaust and other emissions over the city. It worsened on Friday when a northerly wind blew in emissions from industrialized areas of Germany and beyond.

It had been 17 years since the last smog emergency in Paris and, even at its worst, Schofield says, the air was nowhere near as bad as it often is these days in developing world cities like Beijing, São Paolo and Mumbai.

"It was certainly annoying and bad and I felt a catch in my throat when I went cycling and so on," he says. "But it was nothing like the levels of smog that you could experience" in those cities, he says.

Schofield explains that the emergency steps were taken because Paris has a much lower pollution threshold for such actions. There was also "a certain amount of politics involved ... because we do have the city mayoral elections coming up the end of the week, and that is very much on everyone's minds."

The weather was the immediate culprit, but Schofield says the pollution came from emissions from diesel engines and other sources in and around Paris. He says Paris is trying to phase out diesel buses and take other steps to cut pollution.

"Everyone knows that to address this problem deeply, you can't have these one-off, urgent, emergency reactions like alternate driving ... We're all responsible in the way we consume energy and the way we drive our cars," he says.

But Paris is not particularly guilty. "It's got a very good public transport system, " he says. "It's just that maybe it needs to be extended in certain areas and more incentives put in place for people to leave their cars at home."