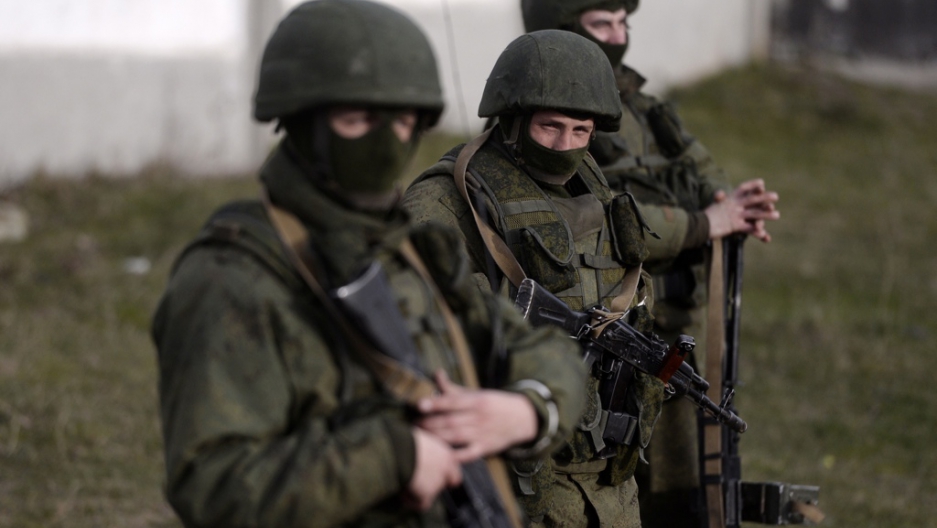 Armed men, believed to be Russian servicemen, stand guard outside a Ukrainian military base in Crimea on March 16, 2014.
Credit: DIMITAR DILKOFF
Share

KYIV, Ukraine — The world’s most predictable referendum has produced the result required by Vladimir Putin. Now Ukraine and an anxious world must wait to see what the Russian president wants next.

If Putin is satisfied with the annexation of Ukraine’s southern Crimea region, Europe’s most incendiary crisis since the Cold War could just remain manageable. If he moves the Russian army into the rest of Ukraine, war looks inevitable with unpredictable consequences for the whole region.

“We are not feeling militarily threatened, as yet,” Radek Sikorski, the foreign minister of Poland told CNN Sunday. “The question remains whether Crimea is the limit or whether it’s phase one, then of course it could get much more serious.”

The indications are that Putin is looking to move beyond Crimea — which on Sunday produced a 95 percent vote in favor of annexation by Russia.

Ukraine’s Defense Ministry said Sunday the Russians have massed 60,000 troops close to the border, in addition to more than 20,000 occupying Crimea.

Ukrainian officials claim unrest in the country’s eastern cities that has left at least three people dead in recent days is being stoked by Russian agitators seeking to provoke a reaction that would justify invasion. Moscow has repeatedly issued statements saying it is prepared to intervene to restore order and protect Russian-speaking citizens.

On Sunday, a mob waving Russian flags broke into public buildings in the eastern city of Donetsk and ransacked a cultural center in Kharkiv to the north, making bonfires of books written in Ukrainian.

The head of Ukraine’s national security council Andriy Parubiy said pro-Moscow forces in the east had planned to grab power in eight eastern regions and seize control of Kyiv, the capital by the end of next week. Failure to mobilize sufficient support in eastern cities and swift action by Ukrainian forces — including turning back hundreds of Russians seeking to smuggle weapons across the border — had derailed those plans, he said.

In response, the Ukrainian government has mobilized its armed forces and in a desperate attempt to counter the huge Russian military advantage in numbers and equipment is setting up a new national guard. Ukrainian armored units have been taking up positions close to the border.

“Ukraine’s army will safeguard the border and react decisively to any penetration of Russian soldiers into Ukrainian land,” Vitali Klitschko, the former world heavyweight boxing champion who is expected to be a frontrunner in Ukraine’s presidential elections next May.

“Faced with an invasion, our country will be forced to defend itself,” he told reporters during a visit to a border guard base north of Kyiv on Sunday.

Members of “self-defense units” that defended protesters in Kyiv last month against a crackdown by forces loyal to the ousted, pro-Russian government, have been lining up to join. In Kyiv’s main square, known as Maidan, paramilitary leaders increasingly frustrated with the lack of response to Putin’s land grab appealed for citizens Sunday to take up arms to defend the country and pledged to organize partisan groups to resist any invasion.

In an indication of the mood, members of a 750-strong paintball association in eastern Ukraine posed in combat fatigues on Facebook and wrote they are switching to real guns and preparing for guerilla warfare. “God help the Russian soldiers if we meet them,” they said. “We know our city and they don’t. We are ready for this.”

The prospect of a shooting war has the rest of Europe terrified.

European Union foreign ministers are set to meet early Monday in Brussels to agree on a list of Russian officials to be banned from travel to the 28 EU nations and subjected to an asset freeze.

“We believe measures must be adopted that send a strong signal to Russia that this challenge to the sovereignty and territorial integrity of Ukraine will bring economic and political consequences,” British Foreign Secretary William Hague told reporters as he arrived in Brussels on Sunday evening.

His French counterpart Laurent Fabius appealed to Russia to “to immediately take measures that would avoid a pointless and dangerous escalation in Ukraine.”

Diplomats in Brussels were working late into the night Sunday to agree on the list of those to be targeted. The EU is also expected this week to sign a political cooperation agreement with Kyiv to bolster Ukraine’s ties with the West.

Yet there are divisions within the EU. Some countries — including Bulgaria, Italy and the Netherlands — are wary of going too far for fear of provoking Putin, and damaging their own economic relations with a country that is the EU’s third largest trading partner.

Those divisions will become even more apparent if sanctions targeting selected officials fail to halt Russian pressure on Ukraine and the EU has to impose wider economic sanctions that hit Russian conglomerates, particularly in the energy sector.

There are rumors Russia has floated a peace plan that would impose limitations on Ukraine’s sovereignty — preventing it from joining the EU or NATO, demanding the Kyiv government grant significant autonomy to regional authorities and insisting on Western recognition of Crimea’s annexation. That won’t be acceptable to Kyiv, but it might sow further division among wavering Western Europeans.

Germany’s position will be key. Europe’s biggest economy gets a third of its oil and gas from Russia, trade between the two countries topped $100 billion last year, and one business lobby has warned 300,000 German jobs are dependent on Russian trade.

Yet Chancellor Angela Merkel has been taking an increasingly tougher line as fears grow over the consequences of Putin’s challenge to the international order.

There was a rare piece of good news Sunday as local commanders in the Crimea agreed on a week-long truce that should allow supplies to be delivered to Ukrainian soldiers under siege in their bases by Russian forces.

Yet, plenty of flashpoints remain.

In Kyiv there are fears Russian troops could storm the Crimean bases after the truce expires, that pro-Russian agitators will provoke serious violence in the eastern cities, or that the two sides will clash if Russia continues probing advances out of Crimea into other regions. On Saturday, several dozen troops backed armored vehicles and helicopters Saturday advanced five miles into the neighboring region of Kherson, leading to a tense standoff but no violence.

The next phase of Ukraine’s crisis promises to be fraught for dangers that stretch well beyond Ukraine.