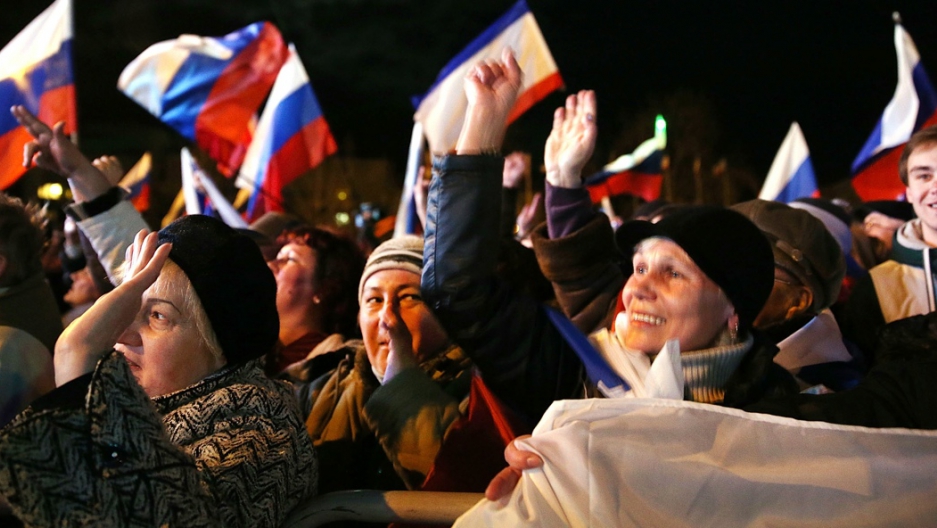 People in Crimea celebrate after voting to join Russia in a referendum organized by Crimea's pro-Russian authorities on March 16, 2014.
Credit: Spencer Platt
Share

After his former commanding officer in an elite Ukrainian police unit was killed last month battling protesters in Kyiv, days before the current government took power, there was no turning back.

“I wouldn’t give a single drop of blood for that new self-declared government,” said the stocky, thick-knuckled 22-year-old.

On Sunday night, Krepichev marched through the streets here in Crimea’s capital, proudly hoisting the regional flag as thousands around him celebrated the results of a Moscow-backed referendum that will likely pave the way for Russia’s swift annexation of the Black Sea peninsula.

With about 75 percent of the votes counted by late evening, local officials said more than 95 percent of Crimeans had voted in favor of joining Russia in the hastily organized poll, slammed by the West as illegal but touted here and in Moscow as a historic and long-awaited moment.

A pro-Moscow vote was predictable, since in recent weeks thousands of Russian troops have swarmed the already pro-Russian peninsula and helped orchestrate a virtually flawless secession movement — headed by a shadowy fringe politician named Sergei Aksyonov, now the prime minister — in a matter of weeks.

The precise figures, however, were difficult to verify because very few international observers had been allowed in.

But that mattered little to voters here in Simferopol, who broke out into mass euphoria downtown even before the results were in.

On the main square, where a hulking statue of Vladimir Lenin still stands, a concert blasted tacky patriotic tunes as demonstrators — many wrapped in Russian flags — danced in jubilation.

Periodically, they broke out into boisterous chants of “Russia!” as cars whipped down nearby streets, honking feverishly and waving Russian flags from their windows.

Seething with anger at the post-revolutionary authorities in Kyiv — whom the Kremlin and Crimea’s predominantly pro-Russian population brand as “fascists” — the region’s secession fever has been fueled in recent weeks by an aggressive Russian state media campaign aimed at discrediting Ukraine’s new government.

More from GlobalPost: Ukraine cobbles together an army as fears of a Russian invasion grow

Portrayed as a gang of bandits and anti-Russian ultranationalists, it has earned widespread scorn from locals here for what they say would be a crackdown on Russian-speakers should Crimea stay in Ukraine.

Both the Kremlin and local separatist politicians have repeatedly warned in dark tones that “fascists” — meaning the various nationalist groups, among many other political forces, that ousted former Ukraine President Viktor Yanukovych — would invade Crimea.

It was under the pretense of protecting fellow ethnic Russians and Russian-speakers in Ukraine that the Kremlin first threatened to send in troops, who are now blocking Ukrainian military bases and other strategic installations across Crimea.

Locals here have largely bought into the message, despite the absence of evidence that suggests an immediate threat.

“Russia is our defender and our future,” said Olga Born, a soft-spoken retiree of German descent. “Look at what’s happening in Ukraine today — everyone is spooked beyond belief.”

Almost no one in the international community recognized the vote, and the White House released a statement suggesting the world would not “stand quietly by” amid Russia’s apparent land grab.

“This referendum is contrary to Ukraine's constitution, and the international community will not recognize the results of a poll administered under threats of violence and intimidation from a Russian military intervention that violates international law,” the statement read.

The lead-up to the referendum was marked by the intimidation of journalists and anti-referendum activists in Crimea by the various security and “self-defense” forces that have taken charge in recent weeks.

Scuffles had broken out during recent protests here in support of Kyiv, including one in Sevastopol — home to Russia’s Black Sea Fleet — during which Russian Cossacks attacked pro-Ukraine protesters with whips.

Cossacks maintain a considerable presence on the streets in Simferopol, where they guard the regional parliament building and patrol local streets alongside the local “self-defense” forces.

They also represent the surge of pro-Russian nationalism that’s gripped the peninsula, thanks in part to Russia’s heavy-handed information campaign emphasizing the country’s long history with Crimea, which is about 60 percent ethnic Russian.

It had been in Moscow’s hands for more than 150 years before the Soviet leadership gifted the region to Ukraine in 1954, and holds a special place in many Russians’ collective imagination.

“I am deeply proud,” he said, “that we’re finally reuniting with Mother Russia.”