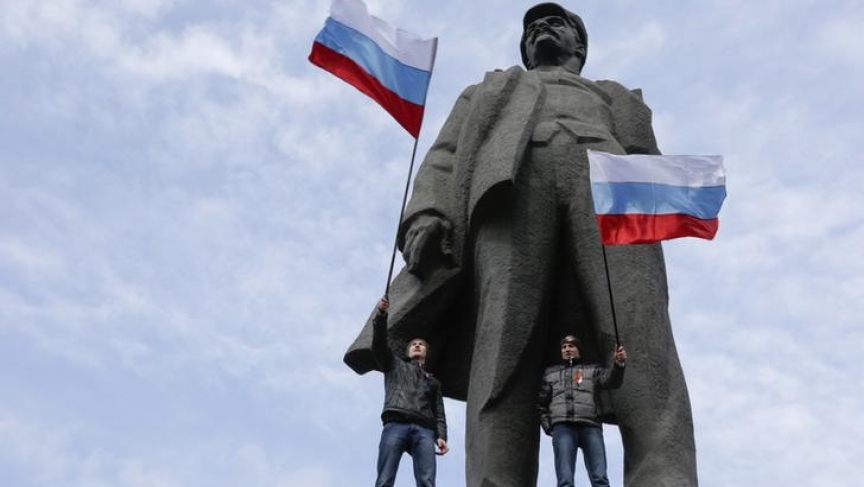 Pro-Russian demonstrators stand at a statue of Soviet state founder Vladimir Lenin as they attend a rally in Donetsk, Ukraine on March 9, 2014. Russian forces tightened their grip on Crimea Sunday, despite a U.S. warning to Moscow that annexing the southern Ukrainian region would close the door to diplomacy in a tense East-West standoff.

The US had threatened to slap sanctions on Russia if Sunday's secession referendum in Crimea went ahead as planned. The vote happened, President Barack Obama imposed sanctions on Monday and what was Russia's response? Not much.

Just hours after Obama announced the sanctions, the Kremlin announced that Russian president Vladimir Putin has signed a decree recognizing Crimea as an independent nation. That's seen as a step toward Russian annexation.

Russian Senator Andrey Klimov told the BBC that the people of Crimea have a right to determine their own future. "Those people, they never gave their rights to Washington or to Brussels," he said.

That sentiment is echoed not just in Crimea, but in other parts of eastern Ukraine, as well, like the city of Donetsk.

Donetsk is home to the BBC's Olga Ivshina right now. She says a referendum to secede from Ukraine in her city wouldn't come as a surprise.

And many people fear the new government in Kiev, she says. Russian media has been pushing on its television shows the idea that Ukraine's new government is fascist. So people think the government will put a ban on teaching Russian in schools and even speaking the language in Ukraine.

It's the same message that was pushed by pro-Russian forces in Crimea before the secession vote, she says. There were even billboards with swastikas pasted on them. Essentially, it was "go with Russia or go with Hitler." Blunt. But it worked, according to Ivshina.

Thousands of Russian troops and pro-Russia militiats didn’t hurt, either, in Crimea. But that is not going on in Donetsk. The only build-up is with Ukrainian forces heading to the border with Russia. There’s talk of a building trench there.

In Donetsk, Ivshina says, there is a media war going on between pro-Ukraine and pro-Russia channels. Which puts Ivshina in a strange position. Some accuse her of being a spy. Others consider her a hero for just being Russian.

"They say, 'Oh, you are our Russian sister. Come save us,'" she says. "So it's quite divided. It is quite black and white, unfortunately."

So will there be a referendum to secede and join Russia in Eastern Ukraine?

"I've been working in Ukraine for three months," Ivshina says, "and unpredictable is the best word to describe the situation here. Each time we think the crisis is over, something else happens."