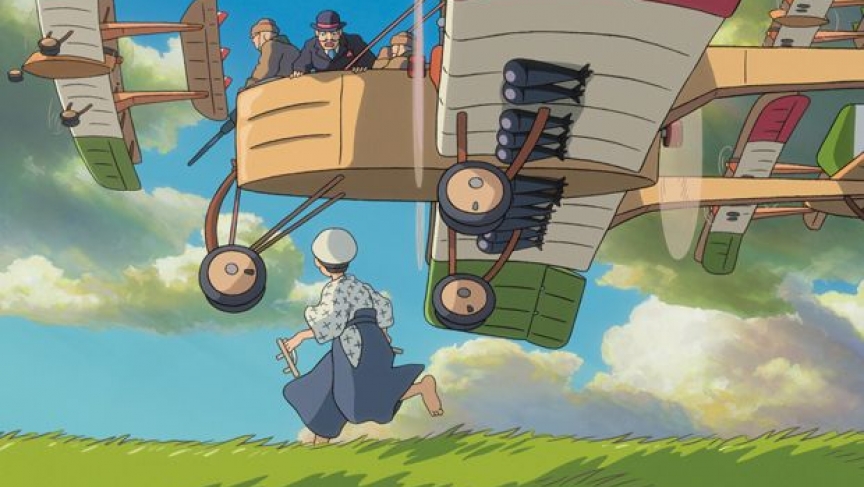 A scene from The Wind Rises.

In some ways, World War II is the war that never ends. Individuals, nations and artists still grapple with what happened and why.

So perhaps it is not surprising that one of the most acclaimed animated filmmakers of our time, Hayao Miyazaki, has turned to the war in his latest film, The Wind Rises. Miyazaki is 73 and he says it is his final film. A friend and collaborator, Linda Hoaglund, says it represents some unfinished business for him.

"Miyazaki felt that he had to confront this,” Hoaglund explains. “His father owned a factory that manufactured airplanes during the war."

A generation of American kids has grown up with Miyazaki’s fantasy, family films, which are full of mythical creatures, flight, and magical transformations — films such as My Neighbor Totoro, Spirited Away, and Princess Mononoke. (The movies are distributed by Disney, and carefully dubbed with the help of Pixar's John Lasseter.)

And while The Wind Rises is also a colorful, animated film, it is set mostly in the real world. Its hero is an historic figure: Jiro Horikoshi, the engineer who designed the Zero fighter planes that dominated much of Asia during World War II, attacked Pearl Harbor, and were later flown by Japan's suicide kamikaze pilots.

It seems a strange topic for a filmmaker known for his pacifism and his rejection of the right-wing, nationalistic attempts to glorify Japan's past. But Hoaglund, a documentary filmmaker who grew up in Japan, says it makes sense.

"His father did make planes for the war. ... [Miyazaki] is also, as we know, in love with flight. He thinks airplanes are beautiful. But they are also used in war. So how do you spin a piece of art out of this?”

In the film, airplane engineer Horikoshi is a sympathetic character — an artist lost in his imagination, motivated by the love of flight and trying not to think about the deaths his planes will cause. As a boy, he dreams of meeting Italian airplane designer Giovanni Caproni, also a real-life figure, who designed and manufactured planes for the Italian fascists.

In Miyazaki’s film, Caproni exhorts the young boy: “Airplanes are not tools for war. Airplanes are beautiful dreams. Engineers turn dreams into reality.”

The contradiction in the film between this romantic, magical view of flight, says Hoaglund, and the reality of the Zero’s use during the war reflects a wider tension in Japan regarding its actions during World War II.

Ironically, there is another hugely successful World War II film in Japan right now, of a very different kind. It is live-action and called The Eternal Zero. It sentimentally portrays the pilots who flew the Zero fighter planes that Horikoshi designed. Miyazaki has called it a terrible film that is perpetuating a phony myth of pride in the Zero fighter.

Miyazaki knew himself the fear and damage that airplanes caused in the war. Hoagland recalls a story Miyazaki used to tell. "He was four years old when the firebombs came and his family had a truck because they were privileged. So he was on the truck and he watched his uncle beat off other people who wanted to climb onto the truck.”

Hoaglunds says Miyazaki told her, "I make films so that situation doesn't have to happen again.”

Miyazaki has said that he was inspired to make The Wind Rises by a quote he read of Horikoshi's: "All I wanted to do was to make something beautiful." For Miyazaki, the Zero represents “one of the few things that we Japanese could be proud of [in our] humiliating history.”