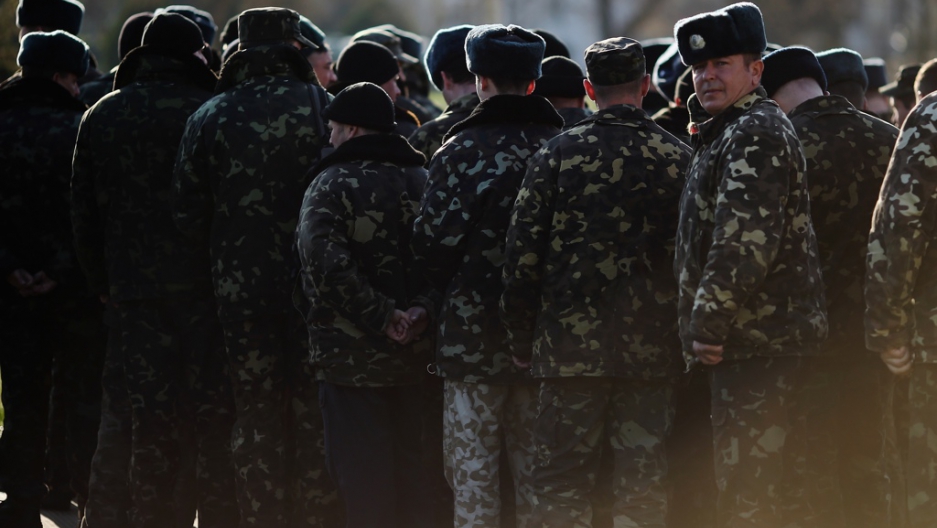 KYIV, Ukraine — Ukraine really needs an answer to the Russian military amassing just over its border. So its government is scrambling to pull together an instant army, drawing on whoever is available — students, computer geeks, restaurateurs, aging veterans.

“This is our land and our spirit is stronger. We’re prepared to die for our country, we’ve already proved that. The Russians have nothing to die for here,” says Viktor Pandzhakidze, who said he wishes he could volunteer.

“I hope the war doesn’t come, but if it does the land will burn under their feet.”

Pandzhakidze, an ethnic Georgian, is a uniformed member of one of the “self-defense units” set up to protect protesters in Kyiv’s central square, known as Maidan.

At 52, and with a nod to his ample waistline, Pandzhakidze says he’s probably too old to be accepted by the 60,000-strong national guard that Ukraine’s new government created this week. However, dozens of younger men from his unit are enlisting.

Should war with Russia break out, the Ukrainian military will need all the help it can get.

Ukraine’s 130,000-strong armed forces are outnumbered eight-to-one by the Russian military. Russia has double the number of tanks and five-times more combat aircraft.

While Moscow has cranked up defense spending by 85 percent to modernize its forces over the past six years, Ukraine’s military has been run down during years of budget stagnation. Much of its Soviet-era weaponry is in poor repair. Some estimates suggest only 6,000 troops are at full combat readiness.

“The services have suffered from inadequate financing and defense reforms have been significantly underfunded,” James Hackett, a military analysis at the London-based International Institute for Strategic Studies, wrote last week. That, he said, has “affected training, readiness and combat capability.”

More from GlobalPost: Crimea prepares for the world's most predictable vote

In addition there are questions about the loyalty of some troops. Security forces loyal to ousted pro-Russian President Viktor Yanukovych used deadly force against the Maidan demonstrators last month. Oleh Tyahnybok, leader of Ukraine’s nationalist Svoboda party complained this week that Yanukovych allowed the military to be infiltrated with pro-Russians.

Despite such doubts, Hackett says the Ukrainian military retains the means to inflict significant casualties on an invasion force. The army was placed on full alert early this month, and National Security Secretary Andriy Parubiy said this week forces had been deployed “to repel an attack from any direction.”

There is no doubt about the loyalty of the recruits signing up to join the new National Guard.

“We are ready to defend our land for the future of our children, the way our parents and grandparents did,” says Vadym Lisnychuk, 35, a restaurant owner turned self-defense unit militant. “The Russians may be very well equipped, but they don’t have truth on their side and the truth always wins.”

Volodymyr Tunik, 51, deputy director of a health research institute, was one of those signing up. As a retired colonel and veteran of the Soviet war in Afghanistan he was accepted despite his age.

“Of course it’s not easy. I left home this morning with my two-year-old granddaughter saying ‘grandpa where are you going,’ but my wife is with me on this. My daughter’s husband is ready to join as well. We are all prepared to safeguard our country.”

Tunik says the Soviet defeat in Afghanistan should serve as a warning against Russian intervention in Ukraine. “We had the most modern equipment there and we left without victory,” he recalls. “I’m sure if the Russians decide to use their weapons, it might cause many victims, but our people will never kneel.”

One military official, who declined to give his name, said friends in his eastern home region were preparing for “partisan resistance” should the Russian army overrun the border.

Talk of such defiance in the face of the overwhelming strength of Russia’s military, may sound like bravado. But the Maidan protesters point to their success in ousting the Yanukovych regime in the face of his security forces’ superior firepower, which killed dozens of demonstrators now venerated as “the heavenly hundred.”

Veterans of those clashes say those deaths galvanized national unity and forged a determination to resist any Russian military intervention.

“I was in the frontline fighting with the riot police. Everyone in the heavenly hundred was my brother or sister, but my true friend, I lost him, a sniper shot him dead right beside me on the barricade,” says Ivan Ovyshchenko, a skinny 21-year-old IT student who grabbed a mike Friday to urge others to join him in answering the call to enlist.

“I cannot standby if conflict comes,” he told GlobalPost.

That determination signals a risk of a prolonged and bloody conflict, should Russian President Vladimir Putin seek to expand his invasion of Ukraine beyond the southern Crimea peninsula, where a referendum organized by pro-Russian authorities is expected to rubberstamp Moscow’s takeover on Sunday.

Polish and Baltic state leaders have warned that would bring risks for the whole of eastern Europe and NATO Secretary General Anders Fogh Rasmussen says Ukraine’s crisis is Europe’s most dangerous since the Cold War.

NATO nations have no stomach for a war with Russia over Ukraine, but the Western alliance has moved to strengthen the defenses of its eastern members. Kyiv is awash with rumors that western military advisors and private US defense contractors are in the country.

So far, the Ukrainian authorities have avoided getting into a shooting war with the 22,000 Russian troops they say are occupying Crimea. However there is a growing fear that street violence which has left several people dead in eastern Ukrainian cities over the past couple of days was engineered by the Kremlin to justify a military intervention to restore order.

Acting President Oleksandr Turchnynov has warned Ukraine should be prepared for invasion “at any moment.

The tension is generating grim humor.

“Someday we will put up a monument to Putin. Nobody else has been able to bring us together like this. I’ve never seen the country so united,” joked Oleg, an official processing volunteers at an army recruitment center.