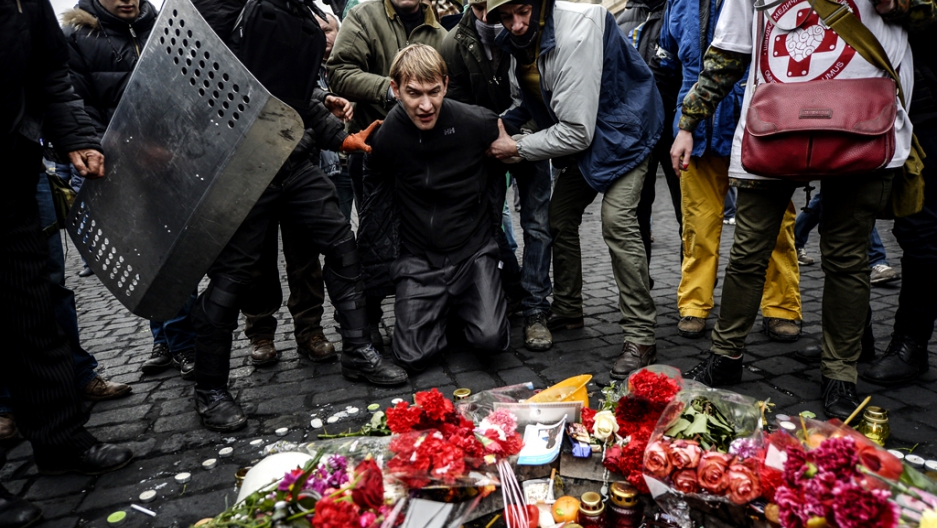 A man suspected of being a sniper and member of the pro-government forces is forced to pay his respects on February 22, 2014 to the mourning place of a victim killed in the clashes in Kyiv.
Credit: BULENT KILIC
Share

Before the current crisis in Crimea, the focal point of tensions in Ukraine was Kyiv's Independence Square. During the bloodiest days of clashes last month, dozens of protesters were shot and killed by sniper fire on the Maidan, as the square came to be known.

By the end of the week, close to a hundred people were dead.

Initial reports seemed to indicate all the sniper fire came from the security forces, but some are now questioning that narrative as Ukraine's interim government investigates who was behind the fatal shootings.

Oleksandr Yakymenko, the former head of Ukraine's Security Service, claimed this week in an interview with TV channel Rossiya that pro-Maidan (pro-Western) organizers were the ones behind the Feb. 20 shootings.

Yakymenko said the shots came from Kyiv's Philharmonic Hall. That particular building was overseen by the Fatherland Party's deputy Andriy Parubiy, known unofficially as the "commander of Maidan." After President Viktor Yanukovych fled Ukraine, Parubiy assumed the post of Secretary of the National Security and Defense Council for the interim Ukrainian government.

Yakymenko said snipers started shooting at local police forces but then directed their fire on the anti-government protesters fighting the police. After the shooting, some of the snipers moved on to Hotel Ukraine. He added that the Maiden fighters appeared "prepared," leaving the barricades at the first sniper shot.

Yakymenko said Ukrainian nationalist groups Pravij Udar and Svoboda requested his help in clearing out the snipers, but Parubiy wouldn't allow government forces into Maidan-controlled territory. Yakymenko went on to claim that among the snipers were foreign mercenaries. While not making a direct connection between the United States and the snipers, Yakymenko suggested that the US embassy was somehow using Poland to orchestrate the overthrow of (now ousted) Yanukovych.

Pro-Russian news networks were not the only ones that suggested pro-Maidan snipers may have taken part in the shootings.

"The majority of the gunfire seemed to be coming from police lines," said BBC's Gabriel Gatehouse. "But not all of it." Gatehouse said he saw one of the shooters "wearing one of the protesters' green helmets," and shooting from an open window in Hotel Ukraine.

Gatehouse also spoke to British forensic experts on Feb. 24, who examined evidence from the sniper fire. They said the gunfire came primarily from the police. At least one sniper shot from the ground, while three shot from higher vantage points, said the investigators, whose faces were blurred. They all fired in the direction of Hotel Ukraine.

The first suggestion that the snipers might be pro-Maidan supporters came from a leaked phone conversation published by Russia Today — which is funded by the Kremlin — last week. The conversation, originally posted on YouTube, took place on Feb. 25, between European Union Foreign Affairs Chief Catherine Ashton and Estonian Foreign Affairs Minister Urmas Paet.

Paet is heard saying that a medic on site during the shootings said she thought the snipers were shooting at both the police and the protesters. The medic, whom Paet later referred to as "clearly a person with authority," added there was growing understanding that the shooters were not acting on the orders of Yanukovych, but rather the opposition. The Guardian ran with the story cautiously, headlining it with the words "bugged call reveals conspiracy theory."

The Estonian Foreign Ministry confirmed the authenticity of the call but rejected the assertion that Paet "was giving an assessment of the opposition's involvement." (Ashton's people declined to respond to several media outlets, saying that they don't comment on leaked information.) According to Russia Today, the video was uploaded by members of Ukraine's Security Service who remain loyal to Yanukovych.

Russia's suggestion has been that the shooters were organized by the opposition to increase outrage against the government.

The Ukrainian authorities investigating the shootings, meanwhile, are looking more closely at Russia's involvement than at Yanukovych's government, according to the Associated Press.

"I think it wasn’t just a part of the old regime that (plotted the provocation), but it was also the work of Russian special forces who served and maintained the ideology of the (old) regime," Health Minister Oleh Musiy told the AP.

Interim Interior Minister Arsen Avakov, meanwhile, said the snipers were a "third force" that was "not Ukrainian."