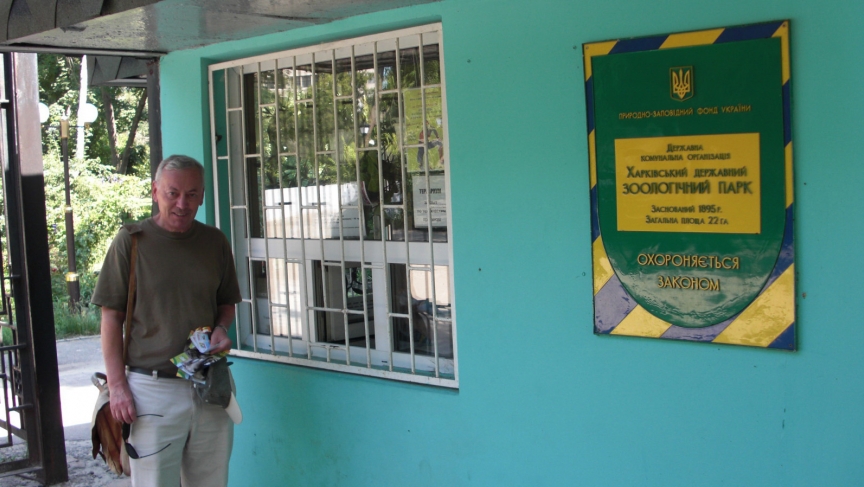 Alina Simone's father, Alexander Vilenkin, at the Kharkov Zoo in 2011. Vilenkin worked there as a night watchman after he was blacklisted by the KGB in Soviet Ukraine.

I’ve been monitoring Twitter for news about my birthplace, Kharkov in eastern Ukraine, after the bloody protests there.

Last week, something flashed across my screen that I never expected to see — news about the Kharkov Zoo. A German researcher tweeted that funding from Kiev had been cut off and the animals were starving.

Within days, the story made international headlines.

The Kharkov Zoo occupies an almost mythological place in my family — it’s where my father worked as a night watchman after he was blacklisted by the KGB.

“When I lived in Kharkov, the KGB had something against me and it was hard for me to get any job, at least any decent job, and getting a job at the zoo was not easy,” says my dad, Alexander Vilenkin.

He’s a physicist now in the US, but in Soviet Kharkov, he couldn’t go to grad school, publish his work or hold any meaningful job. This was undoubtedly the darkest period in his life, but my dad still loves that zoo. When I returned to Kharkov, it was one of the first places I went to visit.

So when I heard about the troubles at the zoo, I called my dad. He still has vivid memories of working there, of sinister co-workers, stolen eagles and sad animals.

“I would walk around the zoo and some animals will come to meet me,” he says. “Deer in particular, they looked pretty sad and I would talk to them a little.”

Then there were the other guards.

“One of them was a driver during the Stalin times, he was an older fellow. He drove people who came to arrest people at night. Knocked on the door, took the person out, and shoved him into this car that this fellow drove.

"Somebody stole a swan, and somebody stole an eagle, luckily not on my shift. But I can imagine the swan, they probably eat it, but the eagle, I don’t know why they did it.”

It's kind of hard to imagine what someone would do with an eagle in a Communist apartment that you share with five other families.

My dad only worked at the zoo for a month or so.

“Sadly, I lost my job because someone told the director of the zoo that I had a higher education. And I don’t know what was the law, but the director told me I was overqualified,” he said.

“By that time, I pretty much had decided to emigrate, so there was some hope on the horizon. You know, when I looked at those animals, I thought they also wouldn’t mind getting out of those cages.”

“I went with my friend, and I was happy to see that the conditions of the animals have improved.

As soon as I told him about the crisis at the zoo, he immediately put the word out to his émigré friends. Some are Russian, some are Ukrainian; everyone wants to help.

But when I called Alexandra Tsekhanskaya, the zoo’s deputy director, she seemed almost hurt that anyone would think they’d let their animals starve. When food started to run low, the director went on local television and made an emergency appeal.

“The people of Kharkov didn’t just run; everyone in the city rushed to the zoo,” she said. "They brought us so much food, we can probably use it for three months.”

Despite the protests in nearby Lenin Square, over 77,000 people bought tickets to the zoo in just three days, according to the zoo’s Facebook page. And donations poured in from all over the world.

I feel like there’s got be some kind of political lesson here. Maybe the Kharkov Zoo should run for president of Ukraine?

As for Tsekhanskaya, her dream is to turn Ukraine’s oldest zoo into a world-class institution and replace cages that are, in some cases, more than 70-years-old.

No more sad animals — my dad would definitely agree with that.