There’s a crisis on the farms of America: Young people don’t want to work there.

The organization known as the FFA, or Future Farmers of America, is well aware of this. The FFA was founded in 1928 to get students more engaged in agriculture and works with the US departments of Education and Agriculture. One solution the FFA is trying: Get more minority high school students, often immigrants, interested in running the farm. That includes kids who have no family background in agriculture and live in urban areas like Buena Park, California.

Buena Park is a sea of concrete. The closest thing to a farm here is Knott’s Berry Farm, a popular amusement park where a farm once stood many decades ago. Venture to the back of Buena Park High School’s campus though, and you’ll find pigs, chickens and steers, as well as students like sophomore Moses Nathan Talavera driving a tractor.

Talavera was born in California. His parents are from Mexico City. He had no experience with farming when a friend told him about the agriculture program at Buena Park High.

“I really like animals, so I decided to get a pig, and I fell in love with pigs,” says Talavera. “I’ve had three pigs so far.”

Talavera raised the pigs then sold them at the Orange County Fair. Students can earn $50 to $500 raising and selling animals.

Senior Urfia Abdul started with rabbits, feeding them and cleaning their cages, then moved on to goats. Abdul was born in Southern California, but moved to India when she was 1. A few years ago, her parents sent her back to Orange County to live with her uncle.

"The first semester, I almost cried every single day because I was so homesick,” she says. 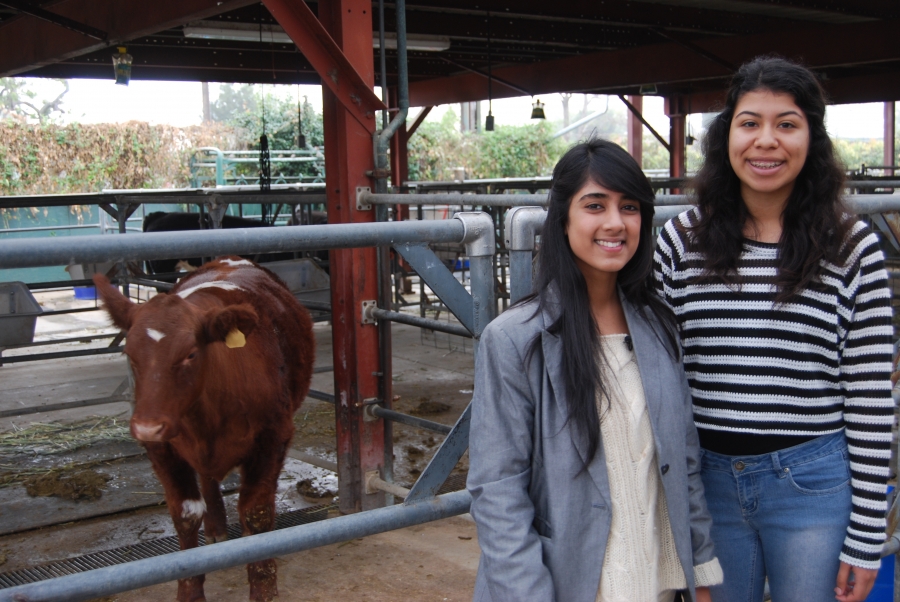 Urfia Abdul (left) and Jessica Solorzano, two of the roughly 500 students enrolled in the agriculture program at Buena Park High.

Then, she discovered the agriculture program at Buena Park High, “a place to call home,” she says.

“Cleaning poop doesn’t sound that amazing or fun,” says Abdul with a chuckle. “But when you’re there cleaning the poop of the animals, there are five other friends that are doing the same thing. You talk to them and build more friendships, more memories.”

This is not The Real Orange County from MTV.

At Buena Park High, 26 languages are spoken on campus, but most of the students are Latino. Those students know the model on most American farms: White farmers own the land, while Latinos do the hard, manual labor. According to the US Census, Hispanics are the ‘principal operators’ of less than three percent of the nation’s farms.

Many of the students at Buena Park have relatives who do the low-wage, difficult farm work like picking fruits and vegetables. Jessica Fernandes, who heads the agriculture department at Buena Park High, wants her students to take pride in the people harvesting the crops, but also know there are other jobs on the farm too.

“There are so many steps from planting that seed to getting it all the way to the grocery store and what happens to convince you or I to buy that product,” says Fernandes “There are hundreds of jobs surrounding the agriculture industry.”

Besides learning to drive a tractor, students at Buena Park High study the business of farming (agriculture economics) and ag sciences.

The student Nathan Talavera, who drove the tractor and raised pigs, wants to be a veterinarian. Urfia Abdul is considering a career in accounting, within agriculture.

In addition to teaching, Fernandes works with the FFA. Under her guidance, the ag program at Buena Park High has expanded from 60 students to nearly 500 in nine years.

But that still leaves three-quarters of the student body uninterested in agriculture. And Buena Park is a major success story for the FFA — at most other urban high schools, many students have probably never even heard of the FFA. That worries America’s farm industry.

“I would say crisis might be the right word because we are in desperate needs of young farmers to carry on the tradition,” says Steve Brown, chairman of the board of directors for the National FFA.

His organization is piloting its “Enhancing Diversity” program in Atlanta and San Antonio to reach black and Latino students. Brown says their pitch to lower-income minorities is pretty straightforward: There are jobs for them on the farm.

“They’re very employable. There is a strong need and that need will continue as the baby boomers retire. There is a huge demand as well as a huge opportunity,” Brown says.

Ag teacher Jessica Fernandes says her students also see farming as a way to get to college.

“If you are in agriculture classes, and you become a program completer, which means staying for the four years and being actively involved, you have access to a $2 million pot of scholarships that no other kid on campus has access to,” says Fernandes.

Add it all up — the scholarships, the jobs, the cash from raising animals — and the pig pen at Buena Park High has become a popular hangout.