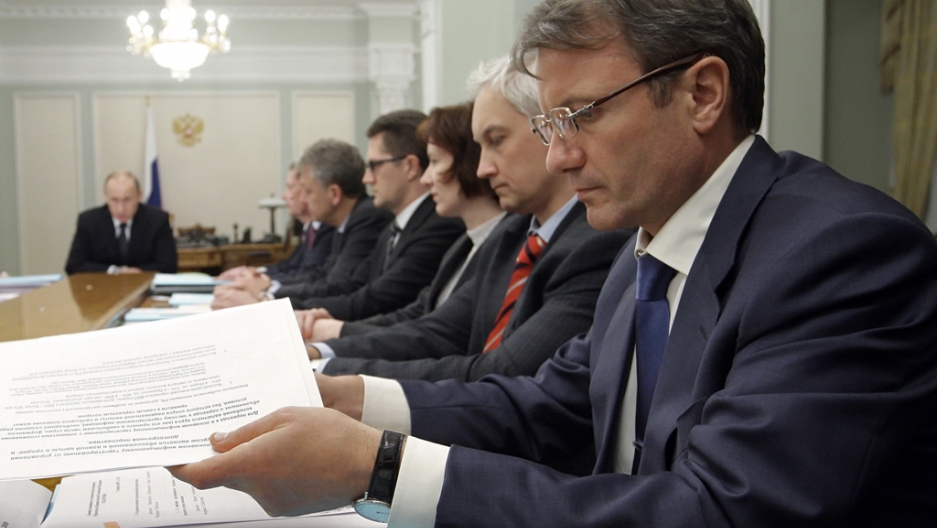 NEW YORK — The circle of Russian bankers and industrialists who’ve carefully protected their interests by keeping on good terms with President Vladimir Putin’s Kremlin — the so-called oligarchs — are increasingly nervous that his moves in Crimea will cost them dearly.

So far, the only US action has been an executive order signed by President Barack Obama imposing a visa ban against certain Russians and Ukrainians and threatening to freeze any assets they or their companies may own inside the United States. The European Union is moving on a similar track.

But with support growing in the US Senate, the EU and other international forums for broader sanctions that would target the Russian financial system — and with it, the energy sector that drives its revenues — the great pillars of Russia’s state-dominated economy could be at risk.

The measures would stop short of the kind of trade sanctions leveled at Iran or North Korea — actions that, if attempted on Russia, would face opposition from Germany, Italy and other nations that do substantial trade with Moscow.

As the chart below notes, US leverage on Russia via trade is limited, although Europe’s large imports of Russian gas and oil potentially offer a lever if replacement supplies can be arranged. But oil and gas supply chains are notoriously difficult to reroute, and the United States’ exports of its own suddenly copious gas to Russia-dependent Central and Eastern Europe are years away.

That has led many to suggest that by targeting Russia’s state-owned banking sector, the international community can punish with reasonable precision a group that’s abetted Kremlin policies, often enthusiastically.

That may seem odd: Hitting out at, say, Bank of America or Morgan Stanley may please some on the left or in the Tea Party, but it hardly constitutes an attack on the US government. Sanctions on private corporations would be unlikely to move US foreign policy.

So why would sanctions against Russia’s banks be different?

To understand why, we need to examine the eccentric and oligarchic nature of Russian banking. Of the country’s six largest banks, the Russian state (through the central bank) owns a majority share of the two largest — Sberbank and VTB. And the Kremlin has significant influence on all of them.

Still, Sberbank accounts for a huge chunk of the financial sector inside Russia. Its operations not only underpin Russia’s consumer economy, but also its vital energy sector — oil, gas and related exports account for as much as 70 percent of the nation’s gross domestic product — and help cement powerful Russian interests for Putin’s government.

Among Sberbank’s board members, for instance, are the Bank of Russia’s chairman, Sergei Ignatev, appointed by Putin, and German Gref, the bank’s CEO and a former Putin trade minister.

The investment bank VTB (market capitalization about $19 billion) has similar ties to the Kremlin. Andrey Kostin, chairman of VTB’s board, is a key leader of United Russia, Putin’s political party. And with 95,000 employees, the bank’s health is of paramount concern to the Kremlin.

Similarly, Gazprombank (an outgrowth of the Russian state gas monopoly), Alfa-Bank and the Bank of Moscow are also run by former ministers of Putin’s government. Of the six largest, only Rosneft is somewhat independent, with 82 percent of its stock owned by the French bank Societe Generale.

Would sanctions against these banks and others chill the Kremlin’s relations with Russia’s powerful business class? One man who thinks so is Alexsandr Lebedev, a billionaire banker who sold all his Russian assets after falling out with Putin and now lives in luxurious London exile as the owner of the city’s Evening Standard and Independent newspapers.

Speaking to The New York Times during a visit to Moscow, Lebedev said he had seen 10 Russians wealthy enough to be listed on Forbes magazine’s World’s Billionaires list in recent days, and that they would not speak out. “It’s those who are here who will take the burden,” hew told the Times. “They all keep their mouths shut.”

Michael Moran worked briefly in the research department of the last independent Russian investment bank, Renaissance Capital. In late 2012, it was purchased by an oligarch close to Putin, Mikhail Prokhorov, best known in the US as the owner of the Brooklyn Nets. Moran left the bank the following month.