Las Vegas workers picketing The Cosmopolitan hotel in Las Vegas, Jan. 31, 2014. Thousands, from The Cosmo and other union hotels, have regularly been picketing demanding better compensation and benefits.

Economists rely on a lot of statistics to gauge the health of the economy. In Vegas, it’s measured, in part, by the level of excess.

The Cosmopolitan hotel and casino is the hot place to be right now on the Las Vegas Strip. Well-dressed people drink cocktails at the Chandelier Bar, a three-story lounge encircled by some 2 million beaded crystals. Go-go dancers entertain – or distract – people at the black jack tables. “The Cosmo” is unapologetically over the top.  That’s not meant to criticize. This is Vegas, after all. It’s why you come here, right?

But not everybody thinks The Cosmo is so wonderful. Since last year, thousands of workers have been picketing every few weeks, urging people to spend their money elsewhere. The Cosmo is one of three hotels on the strip that’s not operating under a union contract, along with The Venetian and The Palazzo, both run by Sheldon Adelson, the world's 8th richest person according to Forbes. (A number of “off-strip” hotels in Las Vegas are non-union.)

Martinez, originally from Belize, found a union job 20 years and is still working at The Luxor, the big pyramid in Vegas, owned by MGM Resorts International. Martinez earns just more than $16 an hour and has a pension. The company covers the costs of her monthly healthcare payments.

The three-story Chandelier Bar at The Cosmopolitan is the hot place to grab a drink in Las Vegas.

“I treat them well, they treat me well. My company is one of the best,” she says.

The workers I met from The Cosmo don’t share that same enthusiasm for their employer.

Katherine Valotoro, who emigrated from the Philippines two years ago, describes The Cosmo as a stressful place to work cleaning condo-style rooms.

“They are big, big rooms, and a lot of glass, even the doors of the bathroom are made of glass,” she says.

You can take a shower at The Cosmo while the person in the bedroom watches you through the glass. There’s also a shade, by the way, if you’re not into that. Valotoro’s job is to make sure there’s no soap residue or streaks on all that glass.

“We were graded, so we have to make the room perfect,” says Valotoro. “And every time I was cleaning a room, I was crying. I was praying that I was able to make it. We don’t have time to eat. Sometimes we eat like in 15, 20 minutes… Most of the time I don’t eat, and I lose a lot of weight.”

Valotoro wants the same workplace rights as union workers. She also wants comparable pay, a pension and paid healthcare benefits. Currently, she says she earns $14.71 an hour, about $1.50 less than union housekeepers. Valotoro says she can’t afford the health insurance plan The Cosmo offers, which ranges up to $350 per month.

Many of the workers at The Cosmo are recent immigrants, like Valotoro, and are either afraid to speak up or don’t know their rights. A majority of workers at the Cosmo voted to be represented by the Culinary Union Local 226, one of the most powerful local unions in the US.

“You need to tell the people what is the truth, to know your side. So we need a union.”

The union and The Cosmopolitan haven’t reached a contract agreement in nearly two years. Union leaders say the Cosmo hasn’t come to the table in more than a year. The Cosmo, which is owned by Germany’s Deutche Bank, declined to comment for this story. Director of public relations, Alyssa Anderson, sent a brief e-mail saying The Cosmopolitan “continues to negotiate in good faith" and “is hopeful that progress can continue in a positive direction.”

In other activity, union workers voted to authorize a strike last week against 10 downtown Vegas casinos, rejecting their current contract. 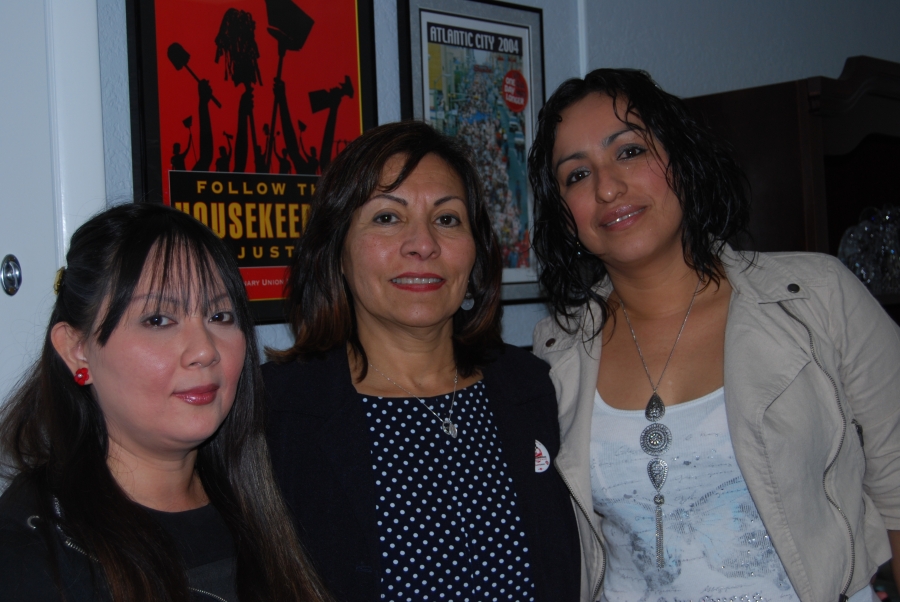 One question I had as I was speaking with Valotoro: If working at The Cosmo is so awful, why not just go someplace else? After all, there are a lot of union hotels in Vegas.

“For me, it doesn’t work,” responded Valotoro. “I need an income, this is my first job. I can’t afford to transfer and lose a job right away.”

Yvadne Martinez, the union housekeeper, says when you’re a new arrival to this country, you have little choice but to work for a non-union employer.

“People want jobs and they [non-union employers] take advantage of that. They know that some people will take anything to provide. That’s why people are working at The Cosmopolitan. It’s just to support their family.”

Of course, many in Nevada, and nationwide, don’t think so fondly of unions.  They argue that unions stifle business growth and protect lazy workers. The housekeepers I met found that argument offensive. They point to the chandelier at The Cosmo, and its 2 million crystals, and ask if they’re the ones being excessive?