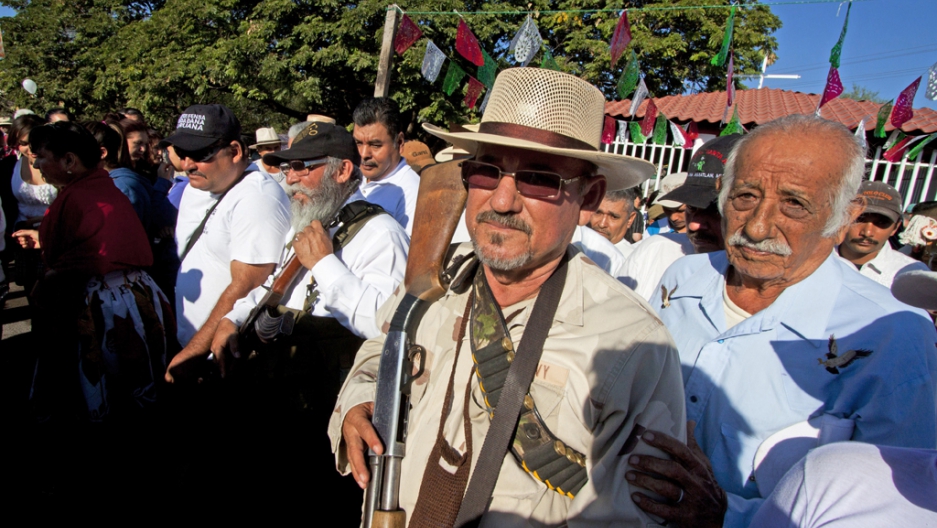 MEXICO CITY — President Enrique Peña Nieto's security team has had an on-and-off relationship with crime-vanquishing vigilantes in the western state of Michoacan.

Things look to be off once again.

State prosecutors on Tuesday detained Hipolito Mora, a top leader of the militias lauded in recent months for successfully driving the brutal Knights Templar gang from much of Michoacan. The militias played a role in Sunday’s killing by marines of that cartel’s founder.

But prosecutors now accuse Mora of involvement in last weekend’s killings of two other men, including a rival vigilante leader.

"There are very important indications, evidence that could show Hipolito Mora's participation in this," Alfredo Castillo, the federal official directing efforts to end Michoacan’s turmoil, told a TV interviewer on Wednesday. "We can't be granting impunity to anyone."

Investigators have until the weekend to file formal charges. Mora and other militia leaders deny the accusations.

But the arrest reaffirms widespread doubts across Mexico about the reliability of the militias and the Peña Nieto government’s wisdom in supporting them. Some fear the gun-slinging vigilantes could prove as bad as the gangsters they’re fighting.

Mora, a prosperous lime grower, was a founder of the self-defense movement, having organized one of the region’s first militias in his town of La Ruana early last year.

Fed up with officials’ failure to confront the Templars’ criminal abuses, community leaders like Mora armed largely untrained townspeople to take on the gang and expel police and mayors accused of working with it.

Officials at first condemned the suspiciously well-armed vigilantes as illegal, accusing them of ties to criminal rivals of the Knights Templar. Still, the movement grew, freeing dozens of towns in recent months from the Templars’ grip.

In little more than a year, the militias have achieved more against Michoacan's gangsters than state and federal governments managed in a decade.

They formalized the relationship in late January with a deal allowing the civilian gunmen to patrol Michoacan's Tierra Caliente (hot country) region alongside federal police and troops.

Some vigilantes will convert to municipal police. Others will become rural guards supervised by the army under a long-standing but seldom used legal arrangement.

Most militia members so far have kept ahold of their illegal automatic rifles and other weapons.

More from GlobalPost: How Mexico's west was won

The government-militia alliance produced Sunday’s stunning death of crime lord Nazario “The Craziest” Moreno in his remote hideout in Michoacan’s Sierra Madre mountains. Moreno was a founder and the spiritual guide of the cult-like Knights Templar and its equally brutal predecessor, La Familia Michoacana. Officials had declared him killed more than three years ago by federal police, though his body was never recovered.

Templar gunmen and others revered the supposedly dead Moreno as a saint. But many in Michoacan insisted the crime lord was alive and still rampaging. Militia leaders had repeatedly offered to guide troops to him.

But this week’s arrest of Mora might complicate such cooperation.

Investigators accuse Mora of involvement in the killing of Rafael Sanchez, another local lime grower known as “El Pollo,” or The Chicken. The bodies of Sanchez and an associate were found Saturday near La Ruana. They’d been shot and set afire, gangland style.

An alleged former Templar, Sanchez had become a minor vigilante boss. He was also said to be a longtime enemy of Mora.

"It would be the last straw if now we have this problem and we have a clash between them," said Interior Minister Miguel Angel Osorio, who at the time of La Ruana's takeover was visiting a neighboring town to showcase the government's peacemaking efforts.

In addition to the alleged murders, Mora's enemies accuse him of organized crime ties and of failing to return properties recovered from Templar thieves to their rightful owners.

The mostly rural Tierra Caliente's communities are knitted by extended families and life-long friendships, but riven by the feuds endemic to small towns. Those dynamics infuse the vigilante movement.

Mora was infuriated by the romantic relationship between his niece and El Americano, according to Mireles, the militia spokesman. Perhaps in response, Mora recently forced El Americano's mother out of her La Ruana home, he said.

The showdown has further divided an already fractious vigilante leadership.

Mora’s vigilante gunmen named three interim commanders to replace him and voted to continue cooperating with the government while the killings are investigated. Soldiers confiscated the weapons of several dozen gunmen loyal to Mora on Wednesday.

Mireles said he believed Mora innocent of the killings. But he acknowledged that the jailed militia leader might know who carried them out.

"From my point of view Hipolito had nothing to do with the murder," Mireles told his radio interviewer. “This is a situation that began as personal and has been worsening.”