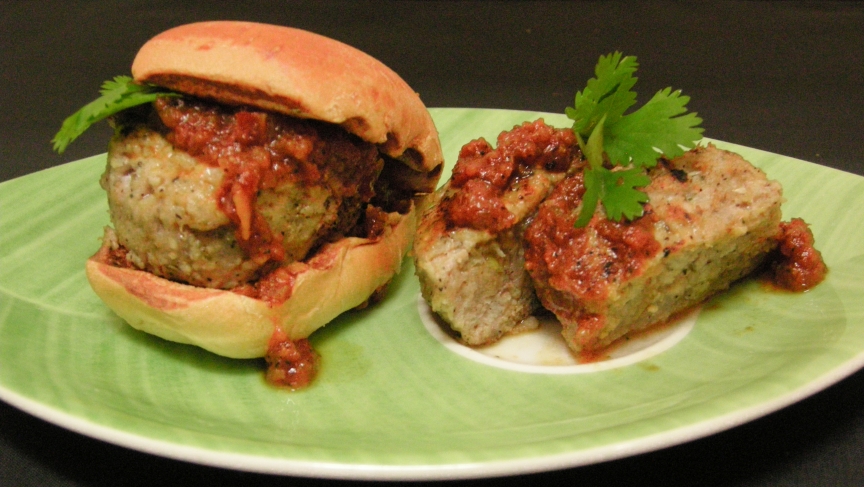 Dirk Fucik's Asian Carp burgers could be one way to deal with the proliferation of Asian Carp in the waterways of the central US.

America has an Asian carp problem, and it’s a serious one.

A number of different carp species from Asia were introduced to the US by fish farmers back in the 1970s. The idea was that the fish, which feed on plankton, could help keep commercial ponds clean.

But the Asian carp got out, bred in record numbers, and headed north. Now, the different species are threatening to get into the Great Lakes, something that fishermen and government officials alike are keen to stop. In fact, a multi-billion dollar electronic fence project is in the works to try to stop the fish from getting in.

“The average person can't really do much about it,” says Chicago resident and fisherman Dirk Fucik. “But they could eat it.”

To that end, Fucik’s spends the summers next to a grill, cooking up carp burgers and offering passersby a taste.

“It’s kind of a hard sell, carp is. People make the face when I offer it to them,” Fucik tells me.

To be fair, Fucik isn’t just a fisherman, and he has a vested interest in getting Americans to say yes to carp. He’s the owner of Dirk’s Fish and Gourmet Shop in downtown Chicago, a shop “for the Sofishticated palate” as the website says. Fucik’s been running the shop, which strives to sell local and sustainable fish, since 2003.

He’s been in the fish business a long time.

“I always tell people I was born a Pisces, so I guess it was inevitable that I would become a fish monger. So, you could say I started 57 years ago.”

But it was only in recent years that he started wondering if Asian carp could be made into a food source. He knew immediately that it was going to take a massive PR campaign.

“When Americans think of carp, they think of the German carp — the yellow carp that came over with the German settlers way back when. And that fish is a bottom feeder. It is a dark-fleshed meat, and it's strong in flavor and bony.”

But the Asian carp, Fucik notes, feed on plankton. That means the meat is white, and the filet you get from it looks, Fucik says, similar to a piece of cod, at first glance.

The problem is that Asian carp is very bony. And Fucik found that when he tried to debone the fish, the process left him with an unappetizing pile of meat.

So, when life hands you a pile of meat, you might as well just keep grinding it, right? And that’s exactly what Fucik did. He ran it through the grinder. The big bones came out, and the smaller ones were ground into the meat.

He mixed in some lemon zest, salt, pepper and a little garlic. He grilled them up, getting the edges nice and crispy. And then he put it on a bun with some spicy mayonnaise and some arugula.

Fucik liked them so much that he began to branch out. Besides carp burgers of all sorts, he also tried carp hot dogs (they kind of look like bratwurst). Next came tacos, croquettes and Italian wedding soup with, you guessed it, carp meatballs.

And while people continue to make a face when he first offers Asian carp to them, Fucik insists that once folks try it, they’re much more amenable to the idea of eating it.

“If you were to take tilapia, which everyone knows about, and put it side by side with Asian carp and do a blind taste test, carp would win. Carp's much tastier,” says Fucik.

And potentially much cheaper, argues Fucik, who sells ground carp in his shop for around $6 a pound. It could be even less, he says, if demand were greater.

A gourmet carp burger is only part of the equation, says Fucik. Why not use the abundant Asian carp to make meal for farm animals, or use it as fertilizer? Why not use it as a source of protein-rich food for food banks and soup kitchens?

The supply's not a problem. Asian carp have done well in many American rivers and lakes. Too well, in fact. But to get fisherman to fish for it, you’ve got to show them there’s a market for it.

And that means, in part, getting people to eat it. And that, Fucik admits, remains a public relations challenge, at least in the US.

Fucik notes that carp has been a food source in Asia for more than a thousand years. He says he recently received an email from a woman in Indonesia sharing her favorite recipes.

I asked Fucik if a sexier name would help.

“Yeah, they’ve called it ‘Kentucky tuna’ and ‘Shanghai bass.’ But I truly believe in selling the fish for what it is. They taste so good on their own, that you don't really need to disguise them, I don't think,” he adds.

So, next time you’re in Chicago, stop by Fucik’s shop. He’ll be right by the grill, offering you a sample carp burger.

Here's Dirk's Burger recipe if you want to try to make an Asian carp burger at home:

Combine all ingredients except panko crumbs. I like to grind the fish twice to make sure there are no more bones and to blend the spices. Add panko crumbs and form into patties or choose not to use breading. The burgers will be a little softer but just handle with care.

If you want to add cheese, use a soft cheese. Form a small ball of cheese and insert into the center of the burger. Form the burger around the cheese.

Cook for about 5 minutes per side on a hot grill, the cheese will start leaking out when they are almost done.

Try these with our Tomato Jalapeno Chutney recipe with these burgers.