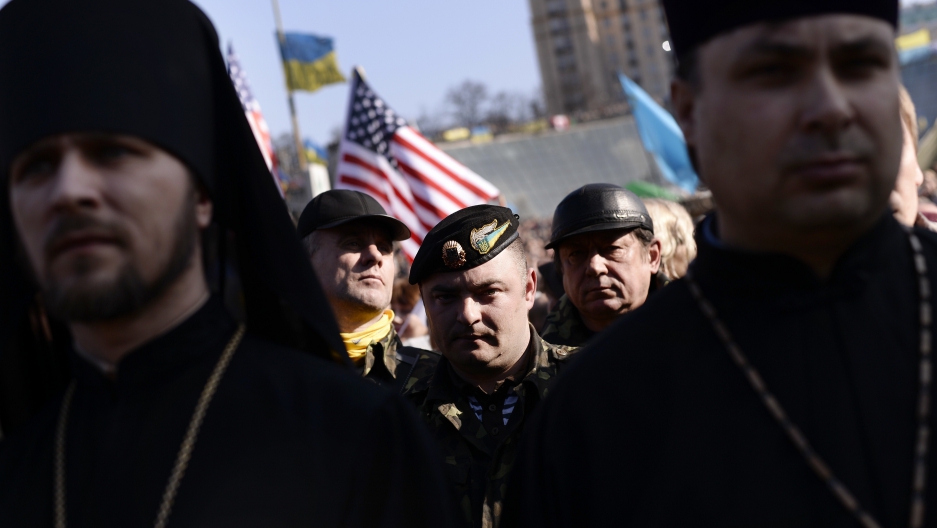 Volunteers and clerics commemorate the 200th anniversary of Ukraine's national poet Taras Shevchenko on the Maidan last weekend. There's mounting anger over the lack of action by the Ukrainian government and its Western allies to halt Russia’s tightening grip on Crimea.
Credit: Dimitar Dilkoff
Share

“This is an open aggression against Ukraine,” he growls in response to the Russian president’s seizure of Crimea. “Now they dream of making this aggression legal.”

Senyk has been manning the barricades in downtown Kyiv since the early days of the demonstrations that toppled Ukraine’s pro-Russian regime last month.

Despite his outrage, the mustachioed veteran is something of a voice of moderation in a city where fear of war mingles with mounting frustration over the lack of action by the Ukrainian government and its Western allies to halt Russia’s tightening grip on the Black Sea peninsula.

“Ukraine has established itself as a peaceful country, but this peaceful spirit is costing us much,” Senyk says beside his bivouac on Kyiv’s main square, known as the Maidan. “Normally we should be arming our people, but it’s too early for that, we have to see what decisions are taken by the international community, whether they can calm Putin down.”

Ukraine’s new government has put the armed forces on alert. On Tuesday, it announced the call-up of reservists and formation of a new national guard, but the authorities have so far sought to avoid actions that could provoke a shooting war with Russia.

That reflects the country’s military weakness compared to its giant neighbor as well as Western calls for restraint while diplomats seek to deescalate the crisis that NATO has called Europe’s most dangerous since the Cold War.

With a Moscow-managed referendum in Crimea expected to rubberstamp Putin’s annexation of the peninsula on Sunday, however, anger among Ukrainians may come to a head.

Demands for a tougher stance have come from within the military, among the “self-defense units” who were in the vanguard of Kyiv’s protest movement, even from church leaders.

A senior member of the Ukrainian Orthodox Church told GlobalPost Ukraine should send troops to “defend the national territory” if Sunday’s vote confirms the move to place Crimea under Russian rule.

“Regardless of the substantial advantage the Russian army has over Ukraine’s, people are very much united and consolidated these days,” said Archbishop Ioan, metropolitan of the central cities of Cherkasy and Chyhyryn. “They are very much willing to self-organize, take up arms and go to Crimea to defend their land, they are just waiting for the order to come out.”

Iaon spoke during a visit to Kyiv’s St. Michael’s Monastery, a dazzling gold-domed complex dating from the 12th century and rebuilt after Ukraine gained its independence from the Soviet Union in 1991, six decades after it was dynamited by Communist authorities in 1936.

The monastery served as an emergency field hospital and sanctuary for demonstrators during last month’s crackdown by forces loyal to former President Viktor Yanukovych. Flowers in the grounds mark the spot where bodies were laid.

Archbishop Ioan says many priests are now effectively serving as military chaplains with the self-defense units in Kyiv and other Ukrainian cities. However, the Orthodox faith is divided in Ukraine between those loyal to the Kyiv patriarch and those whose allegiances lie with the Russian Orthodox patriarch in Moscow.

“Unfortunately, the Church can’t play a mediating role,” Ioan says. “The Moscow patriarch has demonstrated his loyalty to Putin and our Church won’t be able to influence that.”

As the tension builds, Kyiv has been bathed in early spring sunshine. Residents enjoying the weather on the capital’s elegant avenues and on gardens overlooking the broad Dniepr River still hope conflict can be avoided.

“I’m so worried about our guys down there. I don’t want them to get into a military confrontation,” says Olga Kudryavtseva, an 18-year-old in oversized camouflage fatigues during a cigarette break from her work running a canteen for the self-defense units camped out on the Maidan.

“No one wants war,” she adds. “After what happened here, we just want to have a better life.”

Some are hoping against hope for some sort of intervention.

Archbishop Ioan says the deployment of NATO forces to the Black Sea to impose a no-fly zone over Crimea would force Putin to back down.

Others say they hope common sense will prevail.

Volodymyr Glushko, retired businessman signing up to offer his services to the Maidan organizers, says his memories of serving in the Soviet army have convinced him Russian troops won’t obey orders to fire on their Ukrainian brothers.

Still others are resigned to what they believe will be inevitable conflict after Sunday’s vote.

“We are planning to organize a unit in Crimea,” says Kateryna Sviridova-Kalinchenko, 20, a fashionably pierced artist working at medical post coordinating help to those injured during the deadly crackdown on the Maidan. “We’ll go down there next week and treat the injured and any one who needs help.”

For Ukrainians with direct links with Crimea, the strain is difficult to bear.

“My mother cries sometimes when I call her. I’m trying to work more and more, it helps me cope with this terrible situation,” says Sevgil Musaieva, a journalist and internet activist for the indigenous minority of Crimean Tatars.

“Last week I wanted to go to Crimea, but my mother told me not to because she was afraid. I’m one of the activists for our movement and they can make things bad for us in Crimea.”

“I met a lot of my Jewish friends on Maidan, I met Jewish painters, writers,” she says. “It’s not about Fascism or racism — we were against corruption, we were against the police beating students, it was about Europe.”

More from GlobalPost: Postcard from Sevastopol: Where it's not safe to be pro-Ukraine

Rather than fear the demonstrators in Kyiv, Musaieva says Crimean Tatars are frightened by the prospect of Russia taking over their homeland, associating Moscow rule with the mass deportation Soviet dictator Josef Stalin ordered in 1944 that’s estimated to have killed around half the 230,000 people sent into exile.

White crosses have been daubed on Tatar homes in Crimea, recalling the identification used by the Soviets ahead of the deportation. Tatars are already sending their families to other parts of Ukraine, Musaieva says, adding that hundreds of Ukrainian families have written offering to host Tatar women and children.

Sunday’s referendum could prompt many more to leave.

“I never could imagine that such things could happen in my county,” the 26-year-old activist says. “I will have no place to return to in my native land. It’s very hard. I don’t know what can happen to solve this situation.”