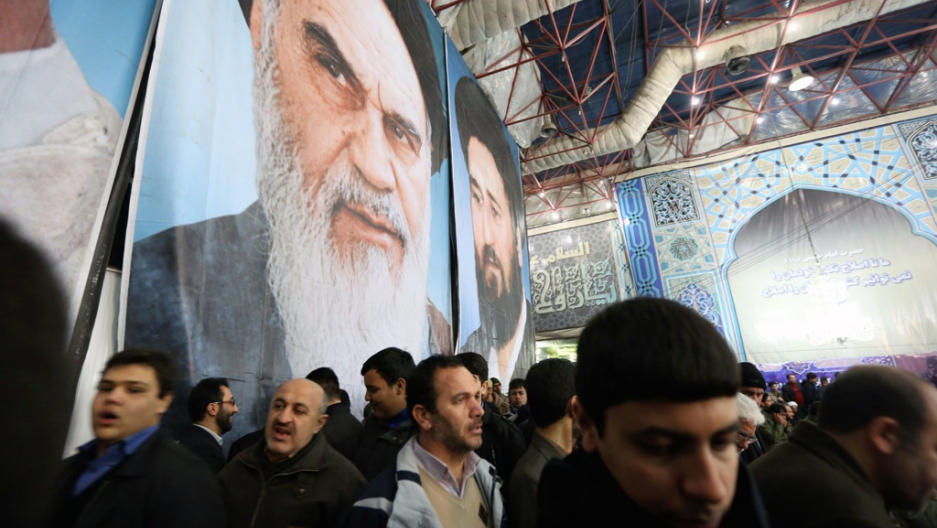 Iranian men gather in front of a giant portrait of the founder of Iran's Islamic Republic, Ayatollah Ruhollah Khomeini on February 1, 2014 at Khomeini's mausoleum in a suburb of Tehran during the festivities marking the 35th anniversary of his return from exile. Khomeini returned from exile in 1979, the trigger for a revolution which spawned an Islamic state now engulfed in a deep political crisis. AFP PHOTO/ATTA KENARE (Photo credit should read ATTA KENARE/AFP/Getty Images)
Credit: ATTA KENARE
Share

When the king of Bahrain recently upped the penalty for anyone found guilty of “offending” him, it reminded us just how many countries count defaming their head of state a crime. It may be par for the course in the United States, but in dozens of nations around the world, badmouthing your commander-in-chief will earn you fines, imprisonment or even a flogging.

Here are 11 countries where it's an offense to offend, and one where it soon might be. While there are many more countries where insulting the leader is illegal on the books, the laws aren't always put into practice. Not so for the countries below, which have all prosecuted offending citizens in recent years.

These men are risking "a fine of 500 to 1,000 nominal financial units, or corrective labor for up to two years, or imprisonment for the same term" if the Azerbaijaini authorities judge that this poster of theirs is "humiliating" to the honor and dignity of President Ilham Aliyev. (No, we're not sure exactly what "corrective labor" is either, but you can bet you wouldn't enjoy it.) Even worse news for them, given that they're comparing him to Charlie Chaplin as Adolf Hitler, is that "Where such acts are connected to accusations of the commission of a serious crime, these are punishable by imprisonment from two to five years."

Lebanon's laws forbid the publication of material that "undermines the dignity of the president of the republic," which is punishable by a minimum of one month and a maximum of two years in prison, and/or a fine between 50 million and 100 million Lebanese pounds ($33,200-$66,400). You might assume that "publication" means the law applies only to newspapers, and perhaps it did when the code was written in 1977, but Lebanon has decided its 30-something year old law also extends to new media. Just last month, for instance, a Lebanese web developer was sentenced to two months in prison for insulting President Michel Sleiman on Twitter, when he tweeted that the head of state was "politically castrated."

Under Venezuelan law, it's a crime to offend, "in writing, speech or by any other means" (interpretative dance?), the elected or acting president. If you're found guilty, you'll get six to 30 months' imprisonment if the offense is considered serious, and three to 15 months if it's considered minor. Commit the offense in public and you'll see your sentence upped by one third. The legislation received some controversial outings under the late Hugo Chavez, who critics accused of borrowing the Castro brothers' approach to dissent in Cuba (where "contempt" of almost any public official is a crime, and insulting the president could earn you up to three years in prison).

4. Poland: Up to three years in prison

US President Barack Obama might want to watch his tongue when he visits Polish President Bronislaw Komorowski: publicly insulting the Polish president is punishable by up to three years in prison. But the same warning goes for anyone tempted to take a swing at Poland's foreign guests. You see, the country's penal code extends the same privilege to any foreign head of state while he or she is on Polish soil. So, for example, during a state visit by Russian President Vladimir Putin in 2005, Polish police arrested 28 protesters demonstrating against him. It may not be the world's harshest insult law, but it's certainly had one of the weirdest applications: in 2006, prosecutors reportedly charged a 45-year-old man with "contempt for the office of the head of state" after he, ahem, loudly passed gas at the mention of Poland's then-president.

5. Turkey: Up to four years in prison

Turkey has some pretty stringent insult laws, and it isn't afraid to use them. The penal code states that "a person who defames the president of the republic shall be imprisoned for a term of one to four years," with the sentence to be increased by a sixth if the offense is committed in public. That goes even if the president has been dead for 75 years: there's a special law on crimes against Turkey's founding father, Mustafa Kemal Ataturk, which states that "Anyone who publicly insults or curses [his] memory... shall be imprisoned with a sentence of between one and three years."

6. The Netherlands: Up to five years in prison

That's right, even liberal little Netherlands has laws to protect its rulers' honor. Intentionally insulting the monarch could earn you up to five years' imprisonment or a fine, while the same offense against the monarch's spouse, the heir apparent, the heir apparent's spouse or the regent carries up to four years behind bars. And these laws don't just sit gathering dust in the statute books, by the way: in 2007, two people were arrested for separately calling the then Queen Beatrix a "whore," while in 2012 another two individuals found themselves with short prison sentences for making statements judged offensive to her dignity.

Several African countries have laws against "sedition" (read: saying stuff your ruler doesn't like) left over from times colonial, and continue to make enthusiastic use of them. We're singling out Cameroon for the chilling reason that, per the penal code, truth is not a defense. In other words, all the bad things you're saying about President Paul Biya may very well be accurate; but that doesn't mean they won't earn you one to ﬁve years imprisonment and/or a ﬁne of 20,000 to 20 million CFA francs ($42-$42,260). And while there may be no specific law against it, you definitely want to refrain from saying too much about the president's wife: one author who wrote a book about the thrillingly-haired Chantal Biya (pictured with her husband, above) found himself sentenced in 2010 to two years' imprisonment after insult charges were filed against him by the Cameroonian state.

8. Bahrain: Up to seven years in prison

Time was, you could insult the emir of Bahrain and get a simple jail term. It was a crime, sure, but no minimum or maximum punishment was set. As of last month, anyone who publicly offends the kingdom's monarch, flag or national emblem is looking at "a punishment of imprisonment for a period of no less than one year and no more than seven years and a fine of no less than 1,000 Bahraini dinars [$2,650] and no more than 10,000 Bahraini dinars [$26,500]." Doing so in the presence of King Hamad bin Isa Al Khalifa himself, according to Bahrain's official news agency, will be considered "aggravated circumstances" and could presumably lead to worse.

If Sheikh Sabah al-Ahmad al-Sabah looks shocked at what you just said, it's because he's "immune and inviolable" and any criticism of him is illegal. It says so right there in the Kuwaiti constitution. If you're found guilty of disregarding this precept — and several people have been in recent memory —  you face up to five years in prison and even, in one case in January 2014, permanent exile. Meanwhile any publication that prints content unfavorable to the emir, or even attributes a quote to him without first obtaining written authorization, is liable for a fine of between 5,000 and 20,000 dinars (approximately $17,800-$71,100).

We have a feeling Kuwait's royal family would get on rather well with Thailand's. Just like the Kuwaiti emir, the Thai monarch is inherently infallible: "The King shall be enthroned in a position of revered worship and shall not be violated," states the country's constitution. "No person shall expose the King to any sort of accusation or action." Anyone who forgets that, and dares to defame, insult or threaten the king, his queen, the heir apparent or the regent "shall be punished with imprisonment of three to 15 years." So says the criminal code. In practical terms, any commentary on the royal family that is less than glowing can invite charges and lengthy prison terms. According to a Supreme Court ruling in 2013, the same punishments apply to anyone found to be insulting any Thai monarch, ever, whether they're alive to hear you or not.

Iran reserves its harshest penalty — death — for those who insult the Prophet Mohammed, but the punishment for speaking ill of its political leaders is hardly a slap on the wrist. More like several slaps, on the back and with a whip. According to the penal code: "Anyone who insults any of the leaders of the three branches of government, presidential deputies, ministers, any of the members of Parliament, or any ministry staff, or any other state employees, due to their duties, shall be punished by imprisonment of three to six months, flogging (74 lashes) or a fine." And you'd better believe they mean it. Just ask Maziar Bahari, a journalist for Newsweek who was sentenced in May 2010 to 13 and a half years in prison and 74 lashes for, among other charges, insulting Iran's supreme religious leader and its president. Bahari had already left Iran and thus escaped his sentence; not so Peyman Aref, an Iranian student found guilty of writing an "insulting" letter to then-President Mahmoud Ahmadinejad in March 2010. He was jailed for a year and, just hours before his release, flogged 74 times.

12. Indonesia: Up to five years in prison?

Let us be clear: you are now free to insult the president of Indonesia with impunity. (Or at least, no less impunity than for insulting anyone else in Indonesia, which isn't actually much impunity.) The article in the criminal code that specifically outlawed "intentional insult of the president or vice president" — formerly punishable by up to six years' imprisonment — was declared unconstitutional and abolished in 2006. However, the government has proposed revising the code yet again, including restoring the ban on dissing the head of state. If the draft is approved by legislators, who are debating it right now, an insult against President Susilo Bambang Yudhoyono could get you up to five years in prison.