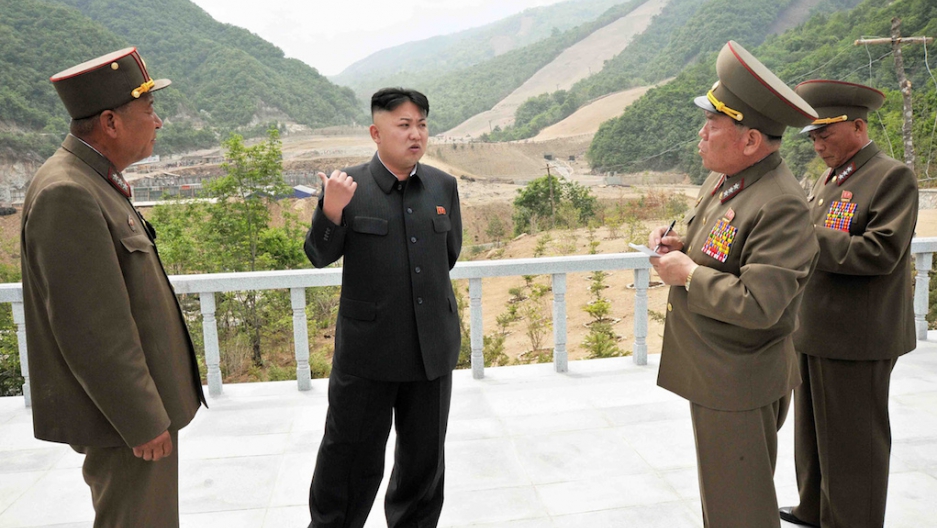 The resort, in the rugged, mountainous east, has 11 ski runs. It also boasts an ornate, abundantly pillared hotel, with a swimming pool, bar and sauna. And the views are scenic, according to Koryo Tours, a Beijing-based company that runs tours to North Korea.

Okay, the resort has its shortcomings.

Medical facilities aren’t widely available, Koryo Tours notes. So if high-speed tree skiing is your thing, you do it at your own peril.

And as with any project so frivolous in this impoverished garrison state, human rights groups have raised hackles. Many accuse the regime of indulging in an expensive, kitschy vanity project while ignoring the plight and malnourishment of ordinary North Koreans. This wouldn't, of course, be out of character. The United Nations accuses Kim Jong Un of spending a cool $645.8 million on luxury goods in 2012, including cosmetics, handbags, leather products, watches, electronics, cars and top-shelf alcohol, the New York Times reports. The following year, the UN determined that the country needed $150 million in food and humanitarian aid.

Still, if you’re into high-octane bragging rights, skiing in one of the world’s most oppressive countries arguably out-dazzles big game hunting in the Congo. And don't worry, despite sanctions it won’t get you thrown in prison when you return home.

Still on the fence? Here are five reasons why skiing in North Korea might be just be over-the-top awesome.

1. You get to ski in North Korea

Forget, for a moment, the thrill of the slopes, the freshness of the snow, and the beauty of the sunsets. The biggest draw? You’ll almost certainly be the first on your block to ski in North Korea — that is, unless you’re a resident of Kim Il Sung Square (in which case you’re probably not reading this on the internet, which is essentially unavailable in Kim Jong Un's realm).

Before hitting the slopes, you can check out Pyongyang’s numerous propaganda museums and Kim Il Sung statues, then make your way to coastal Wonsan city, nearby the Masik resort. Companies like Koryo Tours and Uri Tours offer group packages that include visits to Pyongyang.

2. The slopes aren’t all that bad

Okay, this ain’t no Kitzbuhel, no Zermatt. You can’t exactly ski across international borders here, or take hour-long powder runs across crackling glaciers. In fact, regardless of where you live, chances are you can find better slopes closer to home.

Still, there’s fun to be had.

Out of Masik Pass’s 11 ski runs (not all of which are operational yet), one meanders for about 3 miles. Cockerell, who admits he’s not an expert skier, says he repeatedly fell on his back while making his way to the bottom.

Ride the three ski lifts to the top, and the panorama is gorgeous, say tourists who’ve visited. On the west side is an expansive mountain view, while on the east is the Sea of Japan (or the East Sea, as Koreans call it), notes Uri Tours, another group that arranges tours to the country.

Not bad. You can imagine panoramas on par with South Korea’s North Jeolla province or Japan’s northernmost Hokkaido island.

3. You can ride on Chinese-made ski lifts that might just violate UN sanctions

Yet another first-on-the-block! Under UN sanctions imposed to stop its development of missiles and nuclear weapons, selling “luxury goods” to North Korea is banned. Believe it or not, according to some governments that just don’t understand how essential skiing is to everyday well-being, chair lifts are actually considered luxury goods.

The Kim regime, evidence suggests, is not one of those governments.

In addition to that nuclear program, the UN recently delivered North Korea a diplomatic flogging for alleged widespread crimes against humanity. Forced starvation, executions and political prison camps had “many parallels” with the atrocities in Nazi Germany, the UN panel chief Michael Kirby said at a press conference in Geneva in mid-February.

Kim Jong Un, however, has his own ideas about what constitutes gross infractions of international norms. Last fall, after Switzerland refused to sell the regime lifts for Masik, it accused the European nation of committing a “human rights abuse.”

The Swiss weren’t convinced by this logic.

For a while, Kim’s dreams appeared crushed. Nobody knew where North Korea would get the equipment for his grand project. And then, surprise, surprise, China (which has its own special ideas about right and wrong) swooped in to save the day.

It’s not clear whether China sold the lifts in direct violation of sanctions. The Chinese government has not made its definition of “luxury goods” public. But then again, North Korea is known to get many sanctioned goods informally through Chinese sellers.

Speaking of those lifts, if you’re lucky, when you plant your ass down on the lift, you may sit in exactly the same place once occupied by the portly tush of North Korea’s boy dictator himself.

4. You might not always be accompanied by government “minders.”

When visiting North Korea as a tourist, at least two government guides accompany your group, making sure that you aren’t out of bounds and that you’re not a spy fomenting an insurrection.

Korean War veteran Merrill Newman, 85, ran afoul of North Korean etiquette when he reportedly raised controversial topics with his guides. He was detained in Pyongyang for more than a month.

But the nation appears to have a shortage of minders who can ski. That left journalist Jean Lee time to speak relatively freely with the locals, CNN reported. So either the North Korean government will soon train its guides in skiing, or this will continue to be a rare, unadulterated place to hear about North Korea in the locals’ own words.

5. You won’t have to worry about lift lines, even during February vacation week.

Cockerell estimated to GlobalPost that about 200 visitors were at Masik when he visited just a few weeks after the resort opened. Given that this is North Korea’s first real ski area, there aren’t exactly legions of powder hounds ready to stick a pole in your calf to beat you to the lift.

In other words, Masik could rank among the world’s emptiest ski resorts.

But the next ski season might see a more bustling crowd, Cockerell said. Considering that China and Russia send all sorts of tourists and executives to North Korea, you may want to beat the hoards by booking a flight asap.