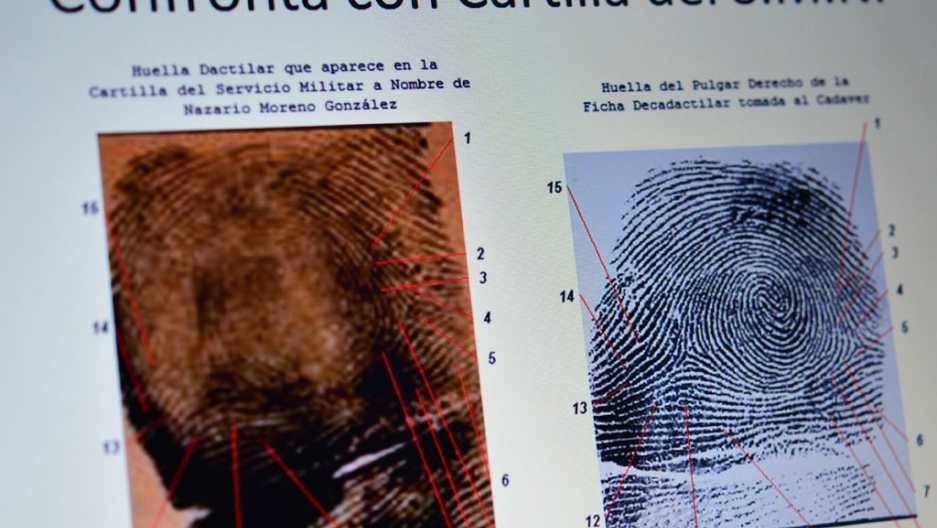 Picture of a screen with a comparison of the alleged fingerprints of Nazario Moreno aka 'El Chayo,' the leader of 'Los Caballeros Templarios' drug cartel, during a press conference at the Interior Ministry building on March 9, 2014 in Mexico City.
Credit: YURI CORTEZ
Share

The locals had it right.

Now, officials say marines on Sunday shot and killed the leader of the Knights Templar gang — for real this time.

That means the dangerous kingpin, known by several nicknames like "El Chayo" and "El Mas Loco" (The Craziest), had been exploiting the cover of his fabled death in 2010 to continue commanding a vicious criminal syndicate from the shadows.

The capo's death — presumably his final one — underscores the confusing and sometimes duplicitous nature of Mexico's narco gang wars of the past seven years, which have left more than 100,000 dead or missing.

It also might crack a window on the corrupt political and police networks protecting the country's top gangsters.

That Moreno was alive and leading the Templars in the western state of Michoacan "was always an open secret," Alfredo Castillo, Michoacan's federal security commissioner, told Milenio television on Monday. "People, civil society, repeatedly told you about this person, recognizing him as the head, the indisputable leader of this criminal organization."

Marines guided by local civilian militiamen cornered Moreno in his mountain lair. They gunned him down in a firefight as he was leaving a party celebrating his 44th birthday, officials said.

Officials said Sunday evening that this time they’ve positively identified Moreno's remains. The attorney general's head of forensics said the fingerprints from the corpse matched Moreno's, so the kingpin's death was “100 percent” confirmed.

"Everyone believes it this time," said Aroldo Mendoza, a shopkeeper in Moreno's hometown of Apatzingan. "People are sure it's him."

Meanwhile, internal fighting erupted Monday between two major factions of the self-defense forces that have been fighting the Templars for the past year. The groups accuse one another of betraying the movement. No casualties were immediately reported Monday night.

Federal police had mistakenly reported Moreno killed by machine-gun fire from a Black Hawk helicopter during a pitched Michoacan battle in December 2010. Top aides of then-President Felipe Calderon said Moreno's body had been carried away by the kingpin’s underlings.

Even the crime lord’s allies backed up the official line.

"Our maximum leader is no longer here," Servando Gomez, who in the past three years has been the Templars' most visible leader, said in a radio broadcast the day Moreno was falsely reported killed. "We have to continue on, we have to do it for our family and our people."

Already, the family had been convulsing.

Moreno had been a founder and leading member of the gruesome La Familia Michoacana. (Remember the five severed heads rolling onto a Mexican dance floor in 2006? That was their doing.)

When Moreno disappeared, his faction of La Familia splintered off and changed its name to the Knights Templar. They promoted the supposedly slain boss as a folk saint. Followers built shrines to Moreno across Michoacan, many with statues of the gang boss clad as a medieval Christian crusader. These quirky images have become a constant topic of online social media chatter.

Some recruits were inducted into the Knights Templar in ceremonies in which they donned cloaks and crosses like the legendary 12th century knights. Townspeople were obligated to read his book of spiritual musings.

"Justice without power is empty, power without justice only generates violence," counseled the message emblazoned last year on a since-destroyed shrine near the town of Apatzingan. "It's necessary to be strong to defend the most unprotected.”

But many locals long insisted Moreno was very much alive and still leading the Templars. Residents of Apatzingan reported seeing him in the street.

“He sometimes dresses as a soldier, sometimes as a priest or a beggar,” an Apatzingan pharmacist who had joined an anti-Templar militia said last month. He lowered his voice even though he was among scores of armed militiamen.

Tierra Caliente residents and security experts alike had insisted Moreno and other Templar leaders were holed up in the mountains where he was killed Sunday morning.

“We had him located and I've reported it since 2010," a security analyst based in the Michoacan capital of Morelia said Monday, speaking on condition of anonymity because of the sensitivity of the issue.

Nevertheless, it wasn't until last month that federal officials "began an exhaustive investigation of the facts and determined that Nazario Moreno was still alive and continued as the undisputed leader" of the Templars, Monte Alejandro Rubido, Mexico's top public security spokesman, said Sunday evening.

Moreno was killed when he refused to surrender on a mountain road about 8 miles outside the town of Tumbiscatio, in the Sierra Madre mountains south of Apatzingan, Rubido said.

Officials made a point to try to convince the wary public, in a country rightly skeptical of alleged victories in the drawn-out drug war.

The killing came two weeks after Mexican marines arrested the country's most-wanted cartel boss, Joaquin “El Chapo” Guzman, whose Sinaloa Cartel is one of the Knights Templar's principal rivals. Because Guzman was arrested without a shot fired in an unguarded apartment, many have speculated he surrendered rather than fell victim to sterling police work.

More from GlobalPost: Even behind bars, Chapo Guzman can bite

The boss of the once-dominant cartel in Ciudad Juarez, Amado Carrillo Fuentes, reportedly died on the operating table at a Mexico City plastic surgery clinic in 1997. But the authorities never recovered his body. The surgeons involved in the operation turned up dead and stuffed in barrels on a highway.

Were they killed in revenge for the gangster's death or because they were able to identify his new appearance? It's difficult to say.

Heriberto “El Lazca” Lazcano, a top leader of the brutal Zetas gang, reportedly was killed by marines in October 2012 in the northern border state of Coahuila. Photos released to the public showed the gangster's body on a funeral home gurney. But gunmen soon afterward spirited the body away, its whereabouts still unknown.

Also clear from Moreno's new death is the impact that Michoacan's self-defense movement has had on the criminal wars in the state.

Whatever the concerns about the militias' roots and true intentions — and doubts about them abound — they have achieved more in a year than the government has managed in 10 years of taking on the gangsters now known as the Knights Templar. Militia leaders for the past year had offered to lead federal forces to the hideout of Moreno and other Templar leaders.

"The current government has done a lot. But so far in Michoacan the principal credit goes to the self-defense militias," security expert Raul Benitez wrote Monday in a commentary on Animal Politico, a news site.

"Let's see what scenario is next, whether this movie becomes reality and begins the decline of all the criminal groups,” Benitez wrote. “We're doing well with El Chapo and El Chayo, but there are many more."