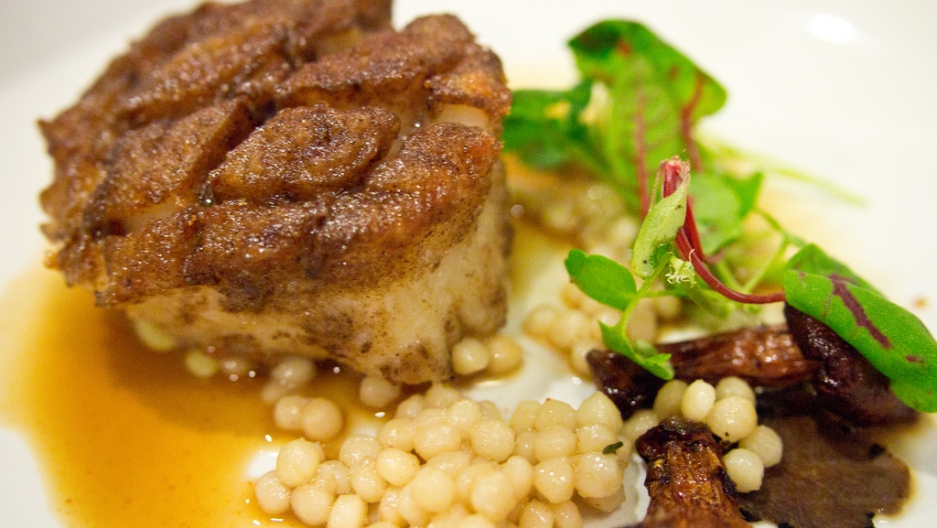 JERUSALEM — Most likely, if you've eaten out in the past few years, you’ve encountered the chewy, nutty, bouncy orb known as Israeli couscous, a toasted pasta shaped into small, even pearls.

It’s not hard to see why it’s caught on. Israeli couscous, made only of flour and water, is easy to mass-produce, and is easy on the wallet. In the parlance of chefs, it is "forgiving" in the kitchen. It never absorbs too much sauce. It’s arguably easier to eat than authentic couscous, whose minuscule, fluffy, and oil-laced grains of semolina threaten any shirt in proximity.

In addition, it accommodates itself to preparations ranging from simply boiled and served plain — in this state a favorite kid’s dish in Israel, alongside chicken-breast schnitzel — to "Truffled with Meyer Lemon and Basil," a recipe floated by the über-gastro website Food52.com as a weeknight meal. ("There's a time and place for snobbery," the recipe caption reads.) Bon Appétit’s no-sweat version of a refined holiday side is "Israeli Couscous with Asparagus, Peas, and Sugar Snaps." In 2008 Ha'aretz reprinted the great (and now, late) Chicago chef Charlie Trotter's Israeli couscous salad incorporating artichokes, spinach, and olives, with the comment: "While here in Israel ptitim are a side dish served to children along with schnitzel in the shape of a dinosaur, elsewhere they are treated as an ingredient for trendy delicacies."

The discrepancy between the image of Israeli couscous in America and its image in Israel would probably have provoked a laugh from Israel's first prime minister David Ben-Gurion, who came up with the general idea for Iraeli couscous during the country’s postwar austerity period. In a moment of desperate food scarcity, non-existent foreign currency reserves, and a massive influx of immigrants, Ben-Gurion turned to his buddy Eugen Proper, one of seven men who established Osem, Israel's first pasta conglomerate, and ordered him to invent a new, cheap food now. (Osem still leads sales of Israeli couscous worldwide.)

The original version, created in 1953, was a tiny, longish ovoid that was supposed to replicate rice and soothe the homesickness of new Israelis accustomed to the Asian staple. It was nicknamed "Ben-Gurion's Rice." The next two prototypes, created from the same flour-and-water dough and toasted in an open-flame oven — to create "a special, unique, nutty flavor," says Baruch Peled, Osem’s current export manager — were formed to resemble lentils and couscous. In Israel, incidentally, the stuff is never confused with real couscous, a mistake that might easily offend the country's significant Moroccan population. Instead it is called "ptitim," the diminutive form of the Hebrew word "pat," meaning portion.

Israeli couscous from the Osem company, as it appears on Amazon.com.

Ptitim’s success as a gourmet food outside its country of origin surprises plenty of ordinary Israelis as well.

"My kids love it, so in my household we eat it at least once a week," says Shai Lipman, 40, an equity market analyst in Tel Aviv and the father of three young children. "It's a simple, common side dish. Basically pasta. Sometimes we'll mix it with bulgur," he says, "to improve the nutritional content."

Told Israeli couscous graces the menus of some of America's best restaurants, Lipman laughed out loud. "​Really? For us it is a leftover from times of austerity, when people couldn't even afford rice. Americans have weird taste ... but I guess that's not news," he says, still chuckling. "Good for them!"

The variety marketed in the United States in the late 1990s, when the Mediterranean diet was trending.

Chefs loved the product, but "confused it with a new grain," Peled recounts. "They related to it like we did to quinoa ten years ago, or maybe like teff today. It was something new. They shortened the name [from 'Israeli Toasted Pasta (Couscous)'] to 'Israeli Couscous.' It wasn't a sophisticated marketing campaign or anything."

While Israeli couscous makes its name on the world's plates and palates, it is eclipsing other, similar, older — and less convenient — Mediterranean dishes. Sardinia's traditional toasted pasta pearls, fregola, now find themselves relegated to the category of "similar to Israeli couscous" — the description offered on Wikipedia’s fregola page.

The classic Palestinian maftoul is a succulent, sophisticated dish, now being marketed as "Palestinian couscous" or even "Giant Couscous."

It is, however, a high-maintenance addition to your list of ingredients. Unlike Israeli couscous, it is neither inexpensive nor instant nor particularly sturdy. It can only be made by hand. (Even store-bought maftool is handmade.)

Majda Zoabi, who makes a weekly batch of maftoul for her sister's restaurant in the Judean Mountains village of Ein Nakuba, labors for over an hour, expertly whisking cracked wheat with a cold brothy liquid flavored with cumin, turmeric and salt, over which she alternates showers of semolina and white flour. Then she mixes and mixes with her bare hands until the mass forms into aromatic, moist mounds of something that looks like uniformly sized whole-wheat bread crumbs.

It is best eaten fresh, but if you must hold on to it, you are instructed to spread it on a metal tray, rake it periodically, and gently pass it through your circling palms several times a day, lest it go stiff.

Then, before eating, it must be steamed, taking about 50 minutes to cook. And no, it is not a "forgiving" ingredient — muck it up, and you find yourself being glared at by an angry yellowish gloppy mess.

Well-made, of course, it is delicious. When you sit down to eat maftoul, possibly in a traditional sauce of freshly chopped tomatoes, cauliflower and tender cubes of lamb, you’re likely to forget the appeal convenience-couscous once held — even when conjured by accomplished American chefs, even if truffled.