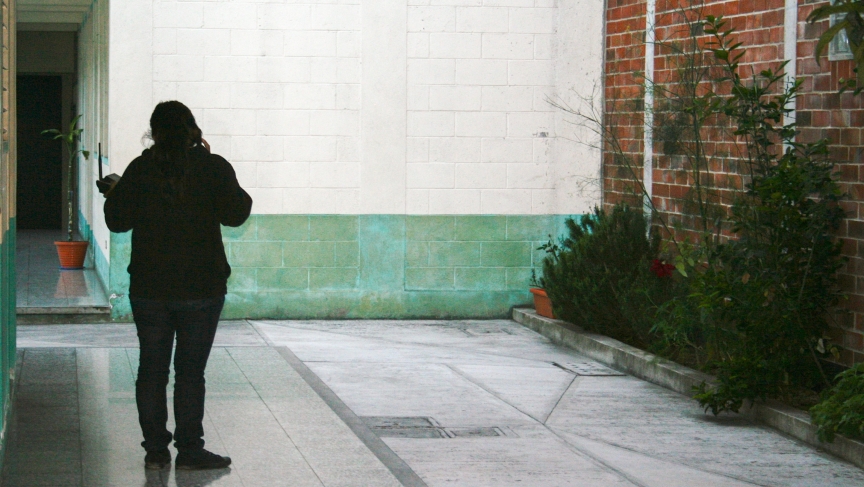 A Guatemalan woman recently deported from the US makes a phone call at a migrant shelter in Guatemala City. Some Central Americans flee to the US for economic reasons. Increasingly, many say they are driven by fear of violence at home.

It’s a cool, sunny morning in Guatemala City. A vendor hawks the country’s most popular newspapers, Prensa Libre and Nuestro Diario. The newspapers are often filled with stories about brutal gang and drug-related violence. Such stories are also common in Honduras and El Salvador.

Down the street from the newspaper vendor is the Casa del Migrante — a shelter for migrants heading north to the US, or for people who’ve just returned because they were deported from there.

María, a petite 63-year-old Honduran is staying at the shelter. In January, she fled Honduras along with 12 relatives. With her, she has a newspaper clipping about the murder of a young man in a wheelchair. The man was her son. She says suspected gang members shot him dead three years ago.

The city in Honduras where they lived — San Pedro Sula — is well known for gang violence. She explains that gang members also shot another son. “They threatened to kill my youngest and because of all this, I had to flee my country.”

“If you’re living in an area that’s affected by gangs and organized crime groups," says Thomas Boerman, an expert on gang violence in the region, "unfortunately you find yourself trapped in a state of real civic helplessness. You are exposed to criminal groups that engage in what are truly incomprehensible levels of violence and barbarism.”

Thomas Boerman has been examining human rights violations in Central America since the 1980s. He's worked as a consultant on gang violence and as a witness in asylum cases involving Central Americans.

For victims, he says, going to the local authorities to report on the crimes is generally a dead-end. Boerman says police can lack the resources to help, or they might face threats by criminals. Or, as in María’s case, she feared the police were colluding with the gangs.

So María and her family fled to Guatemala. But they don’t feel safe here, either. Central American gangs know no borders.

“I would like to go to the US or Canada,” she says. Her possible ticket out of Central America is a folder that she tightly clutches. It’s thick with family documents and evidence, like the newspaper clipping. She hopes it will win her asylum.

Currently, the number of Central Americans like María seeking asylum in the US is small, compared to those trying to migrate to be with family or find work. But that situation is changing — the number of people at the US border saying they fear going back to their home country is growing at an alarming rate. Last year, more than 36,000 people made these "credible fear" claims, up from about 5,000 claims in 2009.

And that, Boerman says, puts immigration authorities in a tricky spot.

“There seems to be a concern on the part of the US government — and it is in no way an illegitimate concern — that if the government begins to grant asylum and other forms of immigration relief to people claiming persecution by gangs, other organized crime groups [and] corrupt police officers … there will be essentially a floodgate effect,” says Boerman.

In Washington, some legislators worry that Central Americans may lie about their motives, if caught at the border.

Congressman Bob Goodlatte (R-VA) chairs the House Judiciary Committee, which recently held a hearing about asylum abuse. He thinks fraud is behind the sharp rise in Central American asylum-seekers. “Because of our well-justified reputation for compassion, many people are tempted to file fraudulent claims just so they get a free pass into the United States,” he said during the December hearing.

But immigration lawyers, academics and asylum experts doubt that the majority of Central American migrants are gaming the system. And they warn that making it easier to deport people, who are fearful to return to their home county, could have tragic results if their claims are, in fact, true.

In Guatemala, María and her family are busy gathering more documentation to back their asylum claim to enter the US or Canada. “God knows we’re not lying,” she says. “We can’t live in our country anymore."