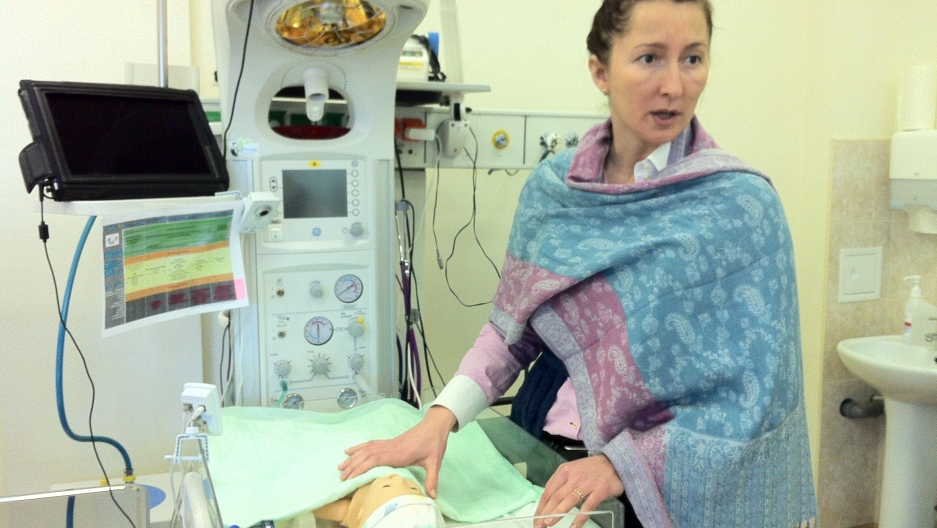 Elmira Knutsen lives with her husband and three children in southwestern Moscow. Her youngest child, Aiden, is 18 months old.

“The whole pregnancy was stressful,” she says.

It was Knutsen’s first childbirth in Moscow. She says she spent many hours during her pregnancy in lines, waiting to visit doctors and get tests. To her, the routine pregnancy seemed overly medicalized, even adversarial.

Knutsen is in her early 30s. By Russian standards, she was considered old to have children, and doctors labeled her pregnancy “risky.”

Several doctors urged her to get an abortion because she had previously undergone a Caesarean section, and they thought her scar was too thin. She refused — and says it was hard to find a doctor who agreed with her decision.

In Russia, most women give birth at special maternity hospitals called “roddom.” The care is supposed to be free, but some mothers advised Knutsen that she should bribe an obstetrician if she wanted to be treated well.

Knutsen says she did not resort to bribes, but she did pay a special fee to get a private room. It cost her the equivalent of $4,000, but it did not buy her much privacy — just half a room with a thin partition.

Meanwhile, many other patients who did not pay for a private room were put on portable beds in the hallway. “And all the women from [the] hallway were using our bathroom,” she adds. No one got much sleep.

Reflecting on her overall experience of pregnancy and childbirth in Russia, Knutsen sums it up this way: “The whole system is not really good for women.”

Some women say the system is not good for their babies, either.

Anastasia Toimentseva also lives in Moscow. She gave birth to her first child in the region of Tver, where she grew up. She says she had no problems with her pregnancy, but during delivery, doctors accidentally injured her daughter.

In the end, her daughter turned out okay, but Toimentseva says her child spent the next year in and out of the hospital for treatment.

Such stories are all too easy to find in Russia. Mothers say there is little concern for their comfort, and pregnancy is treated as if it were a disease. Many Russian women are hospitalized and put on an intravenous drip at some point during their pregnancy in the unproven belief that it can help prevent miscarriage.

Health officials admit that Russia’s medical system was fairly isolated in Soviet times and did not keep up with the latest advances. But officials here say they are working fast to bring the system up to date.

“If you want to talk about the overall outlines of the situation here, it’s clearly changing for the better,” says Gennady Sukhikh, director of the Kulakov Research Center for Obstetrics, Gynecology and Perinatology in Moscow.

On the day I visited the research center, which also serves as a hospital, it was hosting an international medical congress. Representatives of medical device and pharmaceutical companies milled about in the halls. They had come in hopes of capturing a bigger share of the Russian market.

Upstairs in the delivery ward, things were fairly quiet. A large operating room for deliveries stood empty, and nearby a few new mothers rested in the patient rooms, which featured lacquered furniture and plastic flowers in vases.

It may not look like an upscale maternity ward in the US, but this Soviet-era facility is at the center of President Vladimir Putin’s efforts to improve maternity care. Doctors from all over Russia and beyond train here.

Sukhikh says the government is rapidly bringing western technology and methods not just here to Moscow, but to regional centers across the country. He says doctors are also trying to provide more patient-centered care.

“We are trying to reduce the amount of time patients spend in clinics, and to be more effective with that time,” he says.

A reason to encourage births

Kirill Danishevsky, chief editor of the Journal of Medicine of Russia, says the government’s efforts to improve the quality of maternal care are working.

“All of the objective indicators such as infant mortality, maternal mortality, rates of objective complications [are] declining,” he says.

That is good news for Russia, which is investing in maternal care for a pressing reason: the country’s birth rate plummeted during the collapse of the Soviet Union and has yet to recover. One way to keep the population from falling further is to reduce infant mortality. But Danishevsky says actually growing the population is going to be difficult because once birth rates go down, “it’s very hard to make them significantly higher.”

To encourage births, the Russian government is offering a financial incentive. Families are eligible to receive stipends of about $10,000 for each child they have beyond the first.

Elmira Knutsen, the woman who had such an unpleasant experience giving birth to her son Aiden, received a stipend. But she says the money is not enough to entice her to give birth again in a medical system she says is still too stressful for moms.

She and her husband want more children, she says. But next time, they plan to adopt.