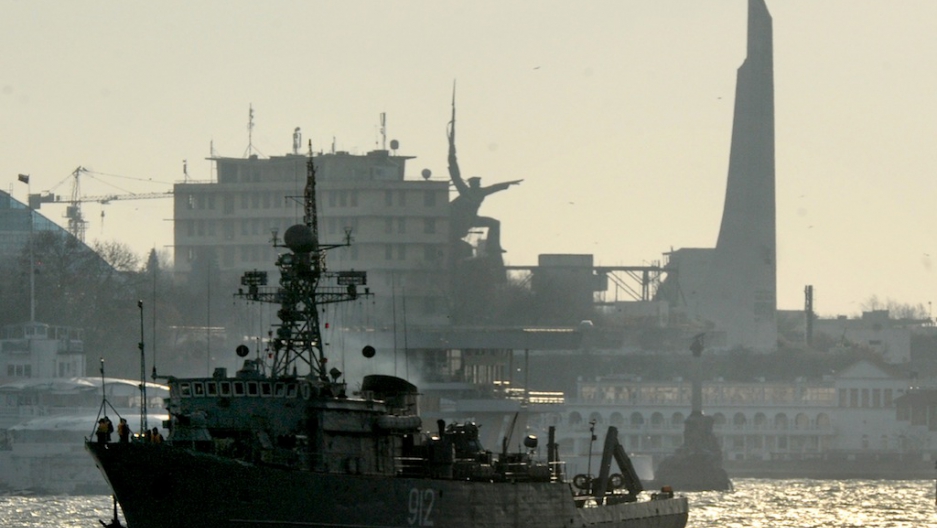 The Turbinist Russian navy minesweeper patrols the harbor of Sevastopol, on March 10, 2014. The Ukrainian flag has never really been embraced in Sevastopol and its famed port, home to Russia's Black Sea fleet since the time of the Tsars.
Credit: VIKTOR DRACHEV
Share

OWL’S HEAD, Maine — Was it only a couple of weeks ago the Sochi Olympics were wrapped up? $50 billion, and unless you won a medal, the only thing anyone will remember about the event is that it took place just before Russia invaded the Crimea.

But the good news is that now, nearly a week after Russia's military takeover of a part of the Ukraine, the key parties to this conflict, Russia and the US, are on hold. It's hard to imagine a win-win solution here, but to Secretary of State Kerry's credit, he's playing the offended-party hand with the appropriate mixture of rhetoric and caution, trying at least to prevent a lose-lose situation.

A Washington Post editorial last Saturday, the day after the crisis peaked, mocked President Obama. It said that while Ukraine's new pro-western president had publicly decried the Russian "invasion, the US had ‘responded with phone calls.’" The Post demanded that Obama threaten Putin with immediate "economic and diplomatic sanctions." And all-around commentator David Gergen, referring to Obama's announcement that there would be "costs" for Russia's behavior, was similarly dismissive: "You can't bring a baguette to a knife-fight."

The usually level-headed Post columnist Roger Cohen was even more apoplectic several days later: "Every form of diplomatic, trade and economic pressure should now be mustered by Obama to isolate Putin; every political means used to buttress the Kyev government; and NATO's readiness to defend its members should be ostentatiously underscored."

Cohen's proposed ostentatious NATO flag-waving poses the risk of miscalculation. Meanwhile, hardly surprisingly, Republican Senator Lindsey Graham attacked Obama by somehow tying in the killing of the American ambassador in Benghazi in 2012 to Russia's move into the Crimea.

The welcome news, which in fact illustrates the difficulty in finding a solution, is that no one—not even the wild-eyes on the Republican right-wing fringe—wants the US to respond militarily.

Senator Ted Cruz, Tea Party apostle par excellence, bloviated that Obama's "abdication of global leadership is making the world a more dangerous place," but he steered away from any suggestion of military action.
It's easy to portray Putin as a vicious autocrat—''thug'' seems to be the preferred term—a reincarnation of the dictatorial rulers from Russia's past.

Russia has always been ruled by autocrats, with the exception of Mikhail Gorbachev, who oversaw the collapse of the Soviet Union, and Boris Yeltsin, who embarrassed himself and his country with his drunken escapades.

Regardless of what we and other western democracies think of strong-arm leaders, the Russians certainly approve. Putin's approval ratings, even before this most recent appeal to the nationalism that citizens of all countries applaud, was double that of President Obama.

New York Times columnist David Brooks wrote a thoughtful piece in which he attempted to analyze Russian, and Putin's, behavior on the basis of a Russian philosopher that Putin has aligned himself with.

Brooks noted that the philosopher, Ivan Ilyin, stressed three great ideas: Russian exceptionalism, its devotion to its Orthodox faith, and its belief in autocracy.

Interestingly enough, the first two are not dissimilar from views of the US that our politicians continue to espouse: American exceptionalism and our Christian faith.

It's autocracy, the third element then, that makes all the difference for Brooks, who concludes "that we may not be dealing with a 'normal' regime, which can be manipulated by economic and diplomatic carrots and sticks."

Putin does indeed embody the tough-minded one-man rule of 99 percent of Russia's leaders during its thousand-year history. But until the tragic fault lines of Ukraine exploded, Putin had shown no inclination to intervene.

The Ukraine debacle forced the inelegant Putin to act, not in typical autocratic Russian fashion blundering in with force, but rather as any sufficiently powerful country would do if faced with what it considered a serious threat to its strategic interests.

Without its Black Sea fleet, and a naval base to accommodate it, Russia would be a further diminished power. Viewed from the Kremlin, the anti-Russian successor to President Yanukovych put at potential risk the treaty giving Russia access to its base in Crimea until 2042. Obviously, such a strategic threat was to be dealt with immediately.

The US really doesn't have much of a dog in this fight, other than our expressed concern about Russia's violating international law and our overall distaste for Putin getting his way.

Russia is more and more tied to Europe. While Russian natural gas exports are a significant factor in Europe's economy, so similarly are the financial transactions of Gazprom and Russia's oligarchs a key element of today's Russian economy.

Severe economic sanctions that affected its banking relationships with the West would be a serious blow to Putin's Russia. The fact that its stock market fell 12 percent the day after the Russian move into Crimea was perhaps as effective a message as any threatened sanctions.

Observers on both the right and the left may be concerned that if the West looks the other way on this, as it essentially did on Putin's move against Georgia in 2008, it will set the stage for greater Russian aggression against the rest of Ukraine.

That seems an exaggerated concern.

The Crimean parliament is calling for a public referendum to see if the already autonomous republic should become an independent state. Such a proposal offers one way out of the impasse. But with Crimea under Russian military control, a legitimate referendum would require hordes of outside observers. Even so, such a plan would hardly be acceptable to Kyev.

Secretary of State Kerry just spent a day in Kyev, an obvious effort to bolster the new pro-European, anti-Russian government.

One hopes he talked about the possibility of an inclusive government that would at least attempt to bring the eastern half of Ukraine closer to Kyev.

Perhaps the outlines of a deal may be already emerging: Ukraine will lose effective control over Crimea, and Russia will have its Black Sea naval base more secure than ever.

Putin wins in the Crimea, but on the international scene, he will be shunned as a pariah for a while. And the world will breathe a big sigh of relief. Not a bad outcome.

If only the disaster in Syria could be resolved so peacefully.

Mac Deford is retired after a career as a Foreign Service officer, an international banker, and a museum director. He lives at Owls Head, Maine and still travels frequently to the Middle East