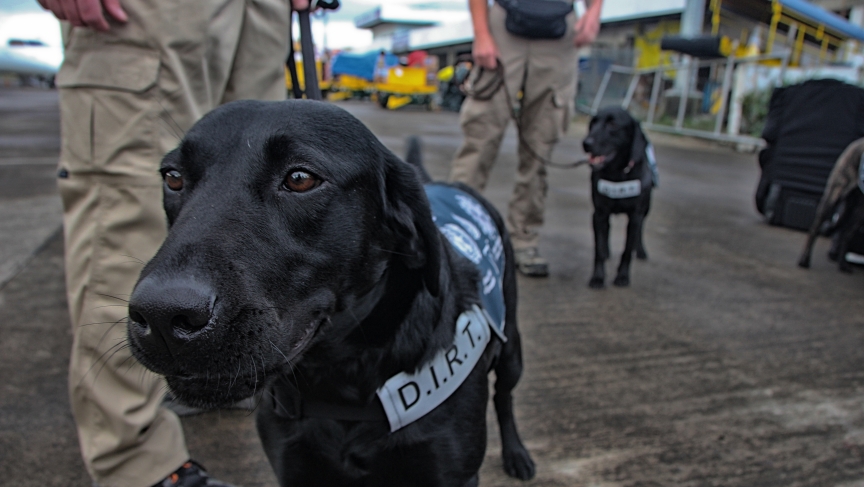 On the shore of Tacloban, you still see wrecked cars out in the bay. In the sand, there are broken trees and household goods — pillows, shaving cream containers, dolls' heads, tablecloths.

Jim Houck, a firefighter from Denver, Colorado, gives instructions to his black Labrador retriever, Patella: "I know you remember what to do. You ready? Go find!"

It's Houck's his third time in Tacloban since Typhoon Haiyan struck. He and Patella are part of an American team of dogs and their trainers. They specialize in finding human remains after disasters. And four months after the storm, bodies of the victims are still turning up nearly every day.

As Patella splashes in the water and sniffs around, Houck tells me that this neighborhood, Barangay 88, has the longest list of missing persons. “So we wanted to start here and maybe put a dent on that list for people.”

Houck says when the storm surge came through here, it washed over the entire peninsula, sweeping thousands of people a mile and half across the bay and into downtown Tacloban. When the water pulled back, it brought with it dead bodies. Even now, months after the storm, some of the bodies may still be tangled in tree roots or tucked into the coves of the beach.

Houck puts a lot of time and work into training Patella, so she is ready to dive into a disaster zone. Dogs like her, known as "cadaver dogs," can maneuver through the destruction, climbing underneath collapsed buildings, climbing into the rubble, climbing a ladder. They can sniff out the bodies swept into the bay.

“I know cadaver dogs that can smell out a body under 40 feet of water,” Houck says.

They can also smell the difference between a human body and a dead pig or chicken under the rubble. Houck says these dogs can even find human remains more than a century old. And he is serious.

But every job brings its own challenges. Immediately after the disaster in Tacloban, the entire city smelled of death. Houck says it was confusing for Patella.

“It wasn't a single body,” he says. “A lot of times, there was more than one, and that was something new for her. It took her a day or two to get over that overwhelming scent and still continue to work.”

When I ask Houck how many bodies Patella and the other dogs on the team have found, he says he’s not sure.

Doing this job, he's come into contact with hundreds of bodies, in every state of decomposition. Houck says he gets through it by remembering that each time they find remains, they're helping with the recovery effort, from the standpoint of health and rebuilding. But there’s also the emotional side, he says. He talks about what it’s like for kids to go chasing after a ball and suddenly stumble across human remains.

But mostly, he says, he does this work for the survivors.

Joel Aradana was separated from his wife and two children during the storm, and never saw them again. You might think that four months after a disaster like this, a person might start to accept that his missing loved ones have died. But it doesn't always work that way.

"Of course, I'm longing for them," Aradana says. "I haven't lost hope that they'll return."

Aradana doesn't feel much like talking as he sits down on his hammock in this seaside neighborhood. But his uncle Mansueto tells me he's happy to know that the cadaver dogs are out there.

"If they can be found or retrieved, that would already be a big deal," Mansueto says.

This is why Houck is volunteering a month of his time, leaving his wife and kids behind in Denver — to give people like Aradana some certainty, some relief from the unknown.

“There's always that hope that someone is still alive. If we can help those people move on,” he says, “if we can help people deal with all the other devastation in their lives being affected by this typhoon — to take that one more thing away and let them move on from that — would be definitely helpful.”

Suddenly, there’s a bark. Bibi, one of the other cadaver dogs, has picked up a scent.

There's something down a steep embankment, in the roots of a mangrove tree. The team marks the spot on their GPS and with a piece of neon yellow tape. Later, Tacloban's fire department will get out their boats to retrieve the remains, and one survivor will be a step closer to finding closure.