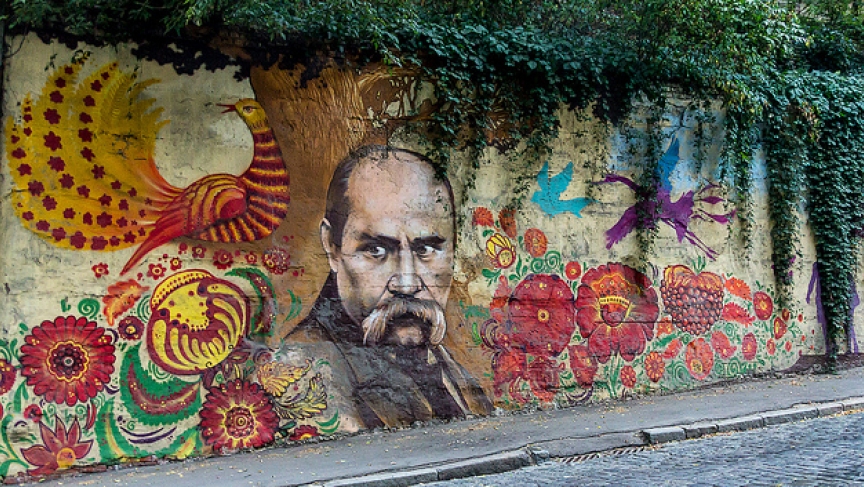 On Sunday, Ukrainians took to the streets to commemorate Taras Shevchenko’s 200th birthday. Shevchenko is a 19th-century poet considered one of the fathers of modern Ukrainian literature.

“His Ukrainian poetry, his Ukrainian language became the basis for Ukrainian literary language,” said Andrey Kurkov, a Ukrainian writer who lives in Kiev.

He is also, according to Kurkov, a symbol of the Ukrainian uprising and independent statehood from Russia.

Taras Shevchenko was born in the region of Kiev, as a serf under a German landowner named Vasiliy Engelgardt. He lost both of his parents at a young age and worked as a servant for Engelgardt. There was no school that he could attend, so instead he befriended a local monk who taught him to read in exchange for manual labor at the monastery. Young Shevchenko also learned how to paint from the monks who painted icons for the church.

While Shevchenko wrote poetry and journal entries in the Russian language, it was his poetry written in Ukrainian that made him a legend in his native land. His poems addressed what Kurkov calls the “difficult destiny of Ukrainian men and women” under the rule and control of the Russian tsar.

“You can find lots of lines in his poems against Moscow and the Tsar,” said Kurkov. “They cannot be happy because they are not free.”

Despite his stance for an independent Ukraine, Shevchenko was a celebrated figure even during Soviet rule, praised for his fight against the classist society that existed under the tsars. His poetry was taught in school and children memorized poems by heart. Still, on March 9 of every year, KGB officers would monitor who laid flowers at his monuments all around Ukraine.

It was considered nationalist and anti-Soviet for activists to go with flowers to his monuments.

Though he pined for his native Ukraine all of his life, Shevchenko died in Russia. He was just 47. His body was carried from St. Petersburg to Kiev and each stop along the way became a shrine.

“In today’s situation with Russia occupying Crimea," said Kurkov, "the poems of Shevchenko get the old meaning that Moscow is trying to dominate and to control the destiny of Ukraine."

Dig my grave and raise my barrow
By the Dnieper-side
In Ukraina, my own land,
A fair land and wide.
I will lie and watch the cornfields,
Listen through the years
To the river voices roaring,
Roaring in my ears.

When I hear the call
Of the racing flood,
Loud with hated blood,
I will leave them all,
Fields and hills; and force my way
Right up to the Throne
Where God sits alone;
Clasp His feet and pray…
But till that day
What is God to me?

Bury me, be done with me,
Rise and break your chain,
Water your new liberty
With blood for rain.
Then, in the mighty family
Of all men that are free,
May be sometimes, very softly
You will speak of me?