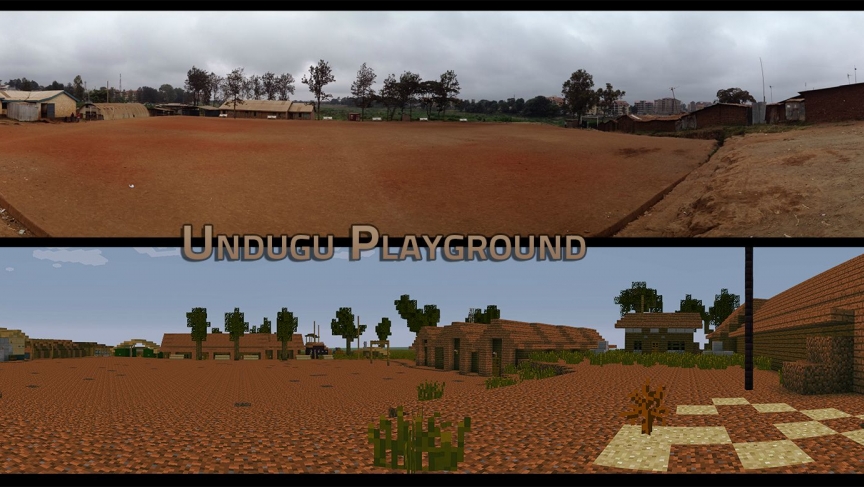 The UN teamed up with FyreUK to show residents of one of Africa's largest slums how a development project would affect their community and its beloved soccer field. They simulated the result in 3D using the popular video game Minecraft.

If there's a child and a computer in your home, you probably already know about Minecraft. It's a computer game from the Swedish videogame developer Mojang, but "game" barely describes it.

My 10-year-old son, Ben, is an enthusiastic Minecraft gamer, spending hours at the keyboard, mouse in hand, building stuff. He's like a homesteader on the virtual prairie. And he's not alone there. Lots of gamers tend plots where they construct everything from small shelters to sprawling cities with Las Vegas-style strips.

Ben explained the basics to me. "Minecraft is pretty much made of blocks. You can kind of build whatever you want." Of course, there are plenty of battle scenarios with hundreds of players racing around the same online space at the same time. But what makes the game remarkable, and fun, is its 3D construction tools, which go way beyond kid stuff.

As a concerned parent, I poked around on the web to find out more about Minecraft and stumbled on this tidbit: Minecraft was being used by the United Nations. It turns out my kid's obsession actually could do good in the world. And here's how.

In Kibera, an informal settlement in Nairobi, Kenya, UN Habitat hopes to build new community centers and create an access road to allow development work in the vast slum. One of the few remaining open spaces available is in an area known as Silanga. But there was a hitch. The open space was already being used for soccer. And local soccer players were dead set against a plan that would cut off part of Silanga's Undugu playing field for an access road.

Kibera resident and community organizer Felix Odour, of Kibera's Kilimanjaro Initiative, says the soccer players were opposed "because they really cherish that sports field, and they just wanted it to be a place where they could continue playing their normal football."  Odour knew that if development were to proceed, it was critical to get the players on board. And that's where Minecraft came in.

The UN had a plan for Silanga that would leave the field intact, but residents didn't buy it, even when the UN showed them plans and architectural drawings. "You know they can be quite difficult to understand if you're not a trained architect," says UN-Habitat's Pontus Westerberg, "and particularly when you work with people with low levels of education like the community in Kibera."

Minecraft maker Mojang had tested the use of Minecraft as a planning tool with community groups in Sweden. UN-Habitat wanted to try Minecraft in Africa and the Undugu playing field seemed a great first project. They enlisted Minecraft modeler FyreUK to build a virtual model of the field.

FyreUK called upon online gamers around the globe to help produce a faithful rendering of the construction area from photos — a patch of dirt surrounded by tin roof shacks. Then the team moved into the modeling the UN plans, says Phil Southam, FyreUK's co-founder. "And then we just spent, I think it's about three days or so, building the area in Minecraft, trying to get every little detail correct" to show what a transformed public space would look like.

There would be a new football field with astroturf, space for a market, community kitchen, public garden, streetlights, parking, and the controversial access road. FyreUK created a time-lapse video, complete with a musical soundtrack, using Minecraft's 3D world to show how the project would be built and how the field would look in the end.

Southam flew to Nairobi with his simulation for a meeting with all the groups interested in the project, including the soccer players' representatives.

When Southam projected the plans on a wall, one of the player representatives walked up and excitedly starting pointing at the field. "Once we had actually shown them that, look, you guys get to have the football field, you can have your access, you know, no one's losing any ground. Everything became a lot calmer." 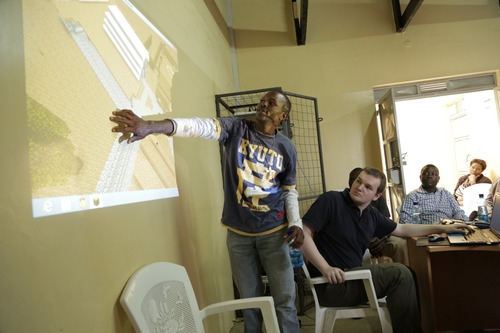 UN-Habitat's Westerberg says, "They were able to walk up to the corner where the proposed cut of the football field was supposed to be, and it kind of explained that there actually was enough room."

But so far, virtual is all there is: What Kibera residents saw projected on the wall has yet to be built.

And community organizer Felix Odour wonders whether it will actually happen. "Growing up in Kibera, I would see so many people coming to interview us, ask us our ideas and opinions on how the place would improve. They raised our expectations in terms of visualizing what would happen and what they would do with us. ... For all those years, very few of those [projects] have happened."

The Kibera Minecraft project was an important first step for UN-Habitat, Minecraft maker Mojang and FyreUK. They're hopeful the construction will begin soon. And they're taking what they've learned in Nairobi on the road to cities around the globe.