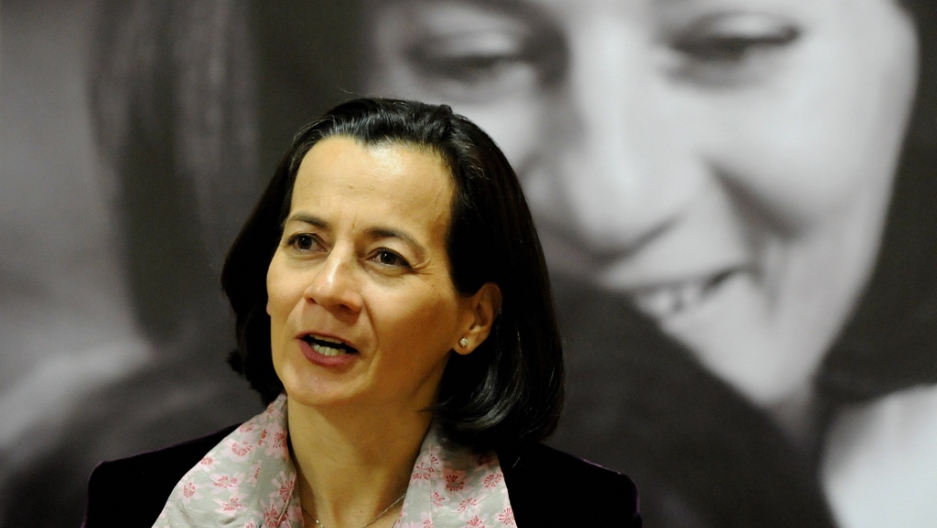 BOGOTA, Colombia — It’s one of the most famous episodes of Colombia’s 50-year-old guerrilla war. In 2002, Colombian lawyer Clara Rojas was managing the presidential campaign of Ingrid Betancourt when the two women were kidnapped by Marxist rebels and held in jungle prison camps for six years.

After they were freed, Betancourt, a French-Colombian citizen, moved to Europe and has stayed out of Colombian politics. But Rojas — who had a far tougher time in captivity, where she gave birth to a baby boy — is now running for the Colombian Congress in Sunday’s election.

Colombian politics remain a risky occupation, so why would Rojas jump back in? In an interview, the 50-year-old Rojas said running for office is another way to move forward and leave behind the painful past.

“When people meet me, they think they’re meeting a victim,” Rojas said while passing out campaign literature at a busy Bogota intersection. “But I’m no longer a victim. If you always consider yourself a victim, you will never take responsibility for your life.”

As Rojas greets pedestrians, many smile in recognition and recall her extraordinary backstory.

Twelve years ago, Rojas was campaigning with her close friend Betancourt, who made the foolhardy decision to stump for votes in a rebel stronghold in southern Colombia. Rojas went along with the plan, and the two were promptly kidnapped by members of the Revolutionary Armed Forces of Colombia, the country’s largest guerrilla group, known as FARC. The rebels planned to use the women as bargaining chips and exchange them for imprisoned FARC fighters.

Rojas was then 38. She feared she would be held hostage for years and lose the chance to become a mother. So, in a jungle prison camp that held dozens of other hostages, Rojas started a consensual relationship with one of her rebel guards and became pregnant.

Though a jungle pregnancy was risky, the hostages lived with risks every day: tropical diseases, snake bites and the possibility of being killed in clashes between the FARC and the Colombian army.

Still, it was an extremely controversial decision. Some of her fellow hostages accused Rojas of sleeping with the enemy. Others saw it as a ploy to secure her freedom. Finally, Rojas asked to be separated from the other prisoners, saying they were acting like “hyenas.”

As her due date approached, the rebels refused to evacuate Rojas to a clinic and instead sent for a doctor. Rojas went into labor but the baby was in the wrong position. The rebel physician never showed up.

“Clara was going to die because the baby wouldn’t come out,” said the rebel camp leader, Martin Sombra, who is now in a Colombian prison. “I know a bit about nursing and realized we had to perform a cesarean section. We found a medical book, studied how to do it, and then I said to Guillermo, one of my troops: ‘We are going to have to cut her open.’”

Her baby was finally delivered by rebels who sterilized their scalpels over a candle. While extracting the baby, they broke the boy’s arm. Rojas lost so much blood she nearly died.

“Today, when I look back on that episode, I’m amazed that I had the strength to go through it all,” Rojas said.

But her ordeal wasn’t over. Her son, named Emmanuel, cried so much that the rebels feared he would give away their location to the Colombian army. So, when Emmanuel was 8 months old, the rebels took him away from Rojas and ordered a peasant farmer to raise the boy. Rojas would not see her son for another three years.

The farmer defied the guerrillas by turning Emmanuel over to the Colombian government’s child welfare agency. Rojas was finally freed by the FARC in 2008 and reunited with Emmanuel.

If it sounds like the stuff of movies, it is. “Operation E,” a Spanish- and French-made film about Rojas and her son, was released last year. (The "E" stands for Emmanuel.) Rojas attempted to bar the film’s release in Colombia, arguing that it violated her son's privacy. But a judge dismissed her claim and Rojas was criticized for promoting censorship.

Rojas went on to direct Free Country, a Bogota organization that counsels the relatives of hostages, and has written three books, including a memoir of her experience as a hostage called “Captive.” Now, she’s taking more risks by running for Congress.

Although overall security has improved in Colombia since Rojas was abducted, guerrillas and criminal gangs continue to target candidates and elected officials, says Alejandra Barrios, who directs an independent election-monitoring group here. Since 2011, 20 government officials have been assassinated and three have been kidnapped, Barrios said. Given the danger, she considers Rojas a hero for getting back in the political arena.

So does Iojeved Kabzir, a Colombian businesswoman whose sister was kidnapped by guerrillas in 2001. After chatting with the candidate on a street corner, Kabzir came away convinced. “It’s important to have people like Rojas in Congress because they understand the point of view of war victims,” she said.

Rojas is a member of the centrist Liberal Party that supports President Juan Manuel Santos and his efforts to negotiate a peace treaty with the FARC. Santos’s decision to launch peace talks in 2012 was criticized by law-and-order hardliners who claim the guerrillas are terrorists and should be eliminated on the battlefield. But Rojas says negotiations are the only way to end a war that has been raging since the 1960s.

More from GlobalPost: FARC would enter politics as part of peace deal

“The peace process is important to leave behind 50 years of war,” Rojas said. She added that Emmanuel will soon be 10 and that it’s vital for her generation to bring the conflict to an end so her son’s generation can live in peace.

If she wins a spot in Congress, Rojas says she will push the guerrillas to provide a full accounting of the thousands of people they are accused of kidnapping, many of whom are presumed dead.

But if she loses, Rojas says that’s OK, too.

“I feel very good, honest,” she said. “I’m happy with my little son. I’m happy with the kind of life that I have today, right? I understand that this is better than the problems in the jungle.”