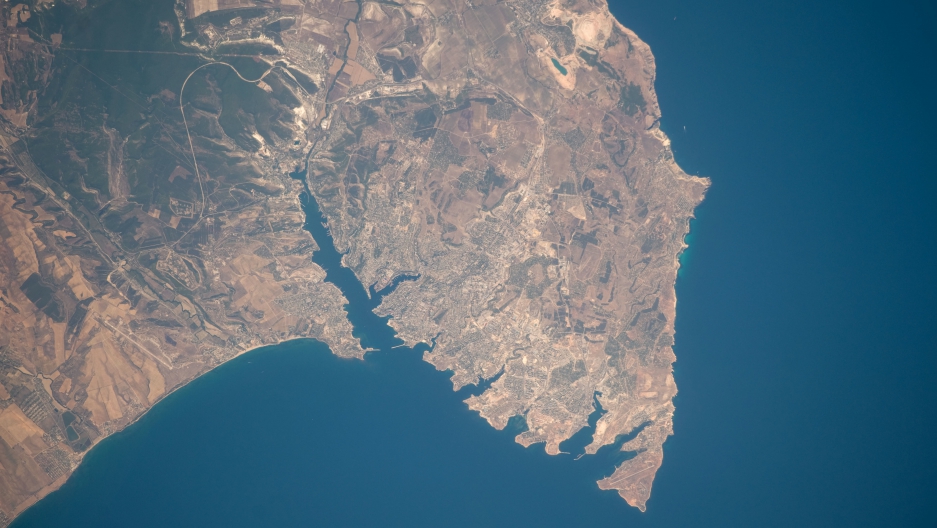 Sevastopol, Ukraine is featured in this image photographed by an Expedition 20 crew member on the International Space Station. The port city of Sevastopol is located in southernmost Ukraine on the Crimean Peninsula.
Credit: NASA
Share

As bad ideas go, the creation of a new ethnic enclave separated from the historical motherland as a means of solving an international problem is about as bad as they get. But that’s precisely what Russia’s parliamentary embrace of the idea of a Crimean secession from Ukraine — and subsequent marriage to Mother Russia — envisions.

You don’t need to cite history to prove this point: A quick scan of today’s headlines provides irrefutable evidence that where shrinking empires and badly drawn borders have left behind isolated enclaves of one country’s territory cut off by the territory of another, trouble isn't far behind.

Extend the example just a bit further to include separatist enclaves or exclaves that have yet to win widespread diplomatic recognition and the case is even stronger. A short list of those would include Republika Srpska, the ethnic Serb section of Bosnia-Herzegovina, Abkhazia and South Ossetia, the breakaway “republics” of Georgia, and even Taiwan, which China regards as a renegade province.

But even excluding those running conflicts, enclaves are the least best solution to any international problem. As defined by political scientists, an enclave is a piece of territory surrounded by the territory of another nation.

A slight variation on that theme — one directly relevant to Crimea — is the exclave. It’s a piece of territory separated by another country from its mother, but where there is access to a body of water — in Crimea’s case, the Black Sea. (Check out this handy site for more of the wonky facts).

More from GlobalPost: Russians in Moscow are pretty psyched that Crimea might soon be theirs

Enclaves that ultimately integrate peacefully into neighboring states are nearly nonexistent. Sure, there are some exceptional oddities: mostly former duchies or princedoms in Europe such as Liechtenstein, Andorra and San Marino. But enclaves generally solve nothing, only stoking nationalist and ethnic resentment, storing up trouble for generations.

As the Ukrainian drama unfolding today makes clear, the former Soviet Union was a warehouse of such problems. Territories absorbed by the tsars in the 19th century in Central Asia and the Caucasus had only the most rudimentary sense of their borders, and when this European concept was drawn on paper, it often separated tribes and nations.

The so-called Volga Germans, farmers who had been invited to settle along that river by Catherine the Great, were sent a thousand miles east to Central Asia. Ethnic Koreans were sent thousands of miles the other way, from the Pacific coast to Kazakhstan.

Indeed, Crimean Tatars, at the center of today’s friction in Ukraine, were deported en masse to Uzbekistan. All of these were carried out brutally and millions perished in the process.

Outside the borders of the old USSR, enclaves have proved explosive again and again.

Danzig, now called Gdansk, was separated from Germany along with most eastern Prussian territories as part of the punitive settlements of World War I, the Treaty of Versailles. Most of that territory became Poland.

But Danzig was a city administered by Poland and separated from the new state by German territory. It was also, most historians agree, about 95 percent peopled by Germans. No surprise, perhaps, that some of the first shots of World War II were fired by a German cruiser at a Polish border post in Danzig.

The most famous enclave of all was the result of that very war: Berlin, because it was located over 100 miles east of where the final Allied advance halted, leaving the Nazi capital entirely in Soviet hands. (IEG-MAPS, Institute of European History/German History in Documents and Images)

The postwar decision to split Berlin into four zones of control — British, French, US and Soviet — ultimately hardened into a division of the city into West and East Berlin. Thus, for decades during the Cold War, the “Free City” of West Berlin was only accessible by air or through a secured transit highway that passed under heavy surveillance through East German territory. Repeated Soviet efforts to choke off the city failed, but it was a flashpoint right to the end, when the Berlin Wall fell in 1989.

Even the less dramatic enclaves and exclaves cause problems. Spain, once ruler of a swath of north Africa called “Spanish Morocco,” retained two small coastal enclaves when it withdrew from Africa in the 1970s. That the two autonomous cities — Cueta and Melilla — have been under Spanish rule since 1668 has not made them any more welcomed by Morocco’s ruling family.

Today, Spain is thinking hard about the value of these two colonial remnants — exclaves, technically, since they both border the Mediterranean Sea. Since the late 1990s, the two have been overrun with North African and other immigrants seeking to enter the European Union.

By and large, enclaves and exclaves rarely solve a problem. Rather, they stand as reminders that some problems are just too convenient to solve properly.