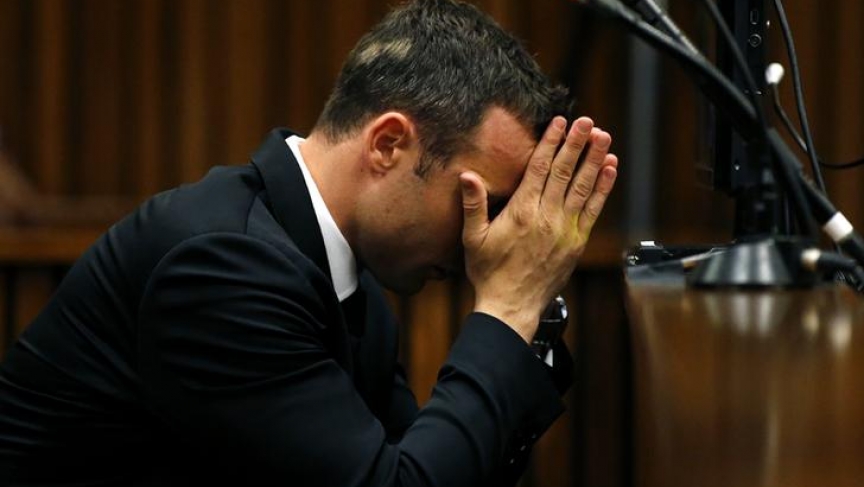 Olympic and Paralympic track star Oscar Pistorius reacts in the dock ahead of his trial for the murder of his girlfriend Reeva Steenkamp, at the North Gauteng High Court in Pretoria, March 5, 2014.

For many, it is the "trial of the century" in South Africa. Oscar Pistorius, the double amputee Olympian, is charged with the premeditated murder of his girlfriend, 29-year-old model Reeva Steenkamp.

This week, the High Court in Pretoria heard testimony about what happened on Valentine's Day last year — the day that Steenkamp died.

Gia Nicolaides, a journalist with the Eye Witness News in South Africa, says it was an emotional week, especially for Pistorius.

"He had to sit in the dock and listen to the testimonies from several neighbors, a friend, a restaurant owner and an ex-girlfriend, who spoke about what type of person he was," Nicolaides says.

One neighbor described how he came to Pistorius' home and saw him next to Steenkamp's body. The witness described Pistorius as praying out loud, saying that "if she survived, he would dedicate his life to God."

The neighbor also gave what Nicolaides describes as "gory" details of her wounds. "He examined Steenkamp's body and noticed a head wound and he said, after looking at that, he knew straight away that she was dead."

The trial has glued South Africans to their TVs, Nicolaides says. "South Africans are loving it. They are following this case, blow by blow, as it is happening."

"It's the first time we've had a trial [on] TV in the country, where people actually get to see what happens in our courtrooms, something that many South Africans have never done before," she says.

The trial is educating South Africans about courtroom procedure. "Many are saying they didn't know that witnesses had to actually go through all this questioning. They feel quite uncomfortable about it."

Nicolaides says that South Africans have become addicted to the trial, "the same way people get addicted to crime series, where they try to put together the pieces of a puzzle to find out the truth ... everybody has an opinion about it. Did Oscar Pistorius kill Reeva Steenkamp by accident or was it premeditated murder?"

The witnesses and cross-examinations continue next week.