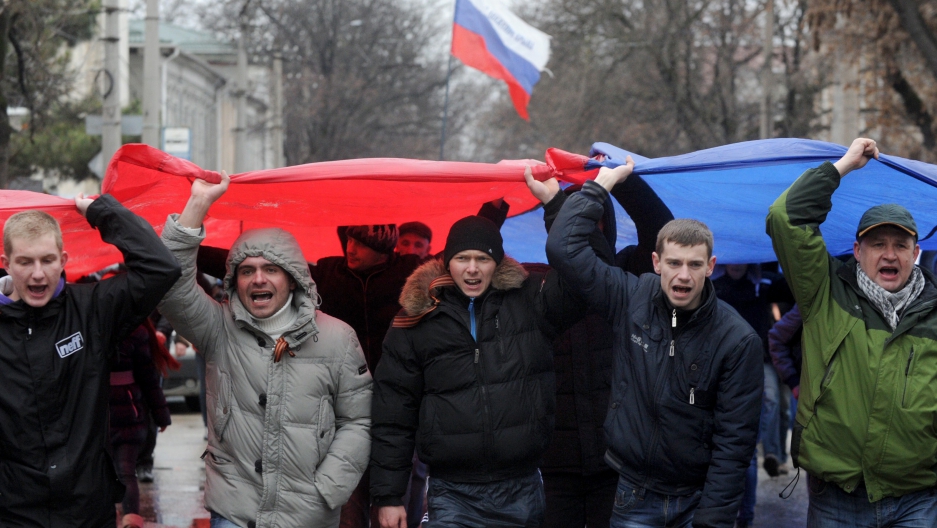 Pro-Moscow demonstrators with a Russian flag near the Crimean parliament building in Simferopol on Thursday.
Credit: Viktor Drachev
Share

At least according to the Russian response to a State Department top-10 list that compiled President Vladimir Putin’s “false truths” on Ukraine.

After Putin’s press conference about Ukraine on Wednesday, the US State Department released a top-10 list of his "false truths" that many considered tongue-in-cheek.

Russia was not amused.

Foreign Ministry representative Aleksandr Lukashevich issued a haughty retort, accusing the United States of “low-grade propaganda” and an arrogant inability to accept it has no “monopoly on the truth.”

“The State Department is trying to play on a shamelessly one-sided interpretation of the events,” he said on Thursday, according to Russia Today.

“What about the bombing of former Yugoslavia or the invasion of Iraq over a fabricated cause? The Vietnam War claimed the lives of two million civilians, not to mention totally destroyed the country and polluted the environment,” Lukashevich said.

The New York Times noted, "Detailed and grisly descriptions of the United States’ past interventions, nearly every one deeply unpopular with Soviet and Russian people, have become a dominant theme in Russian reporting on Ukraine and its Russian-populated Crimean Peninsula."

A former Russian diplomat and Putin ally went a step further during an interview with the Financial Times, saying the United States was trying to destroy Russia.

He accused the West of bringing former Warsaw Pact nations into NATO or the European Union to dismantle Russia.

“We are witnessing a huge geopolitical game in which the aim is the destruction of Russia as a geopolitical opponent of the US or of this global financial oligarchy,” Yakunin told the FT.