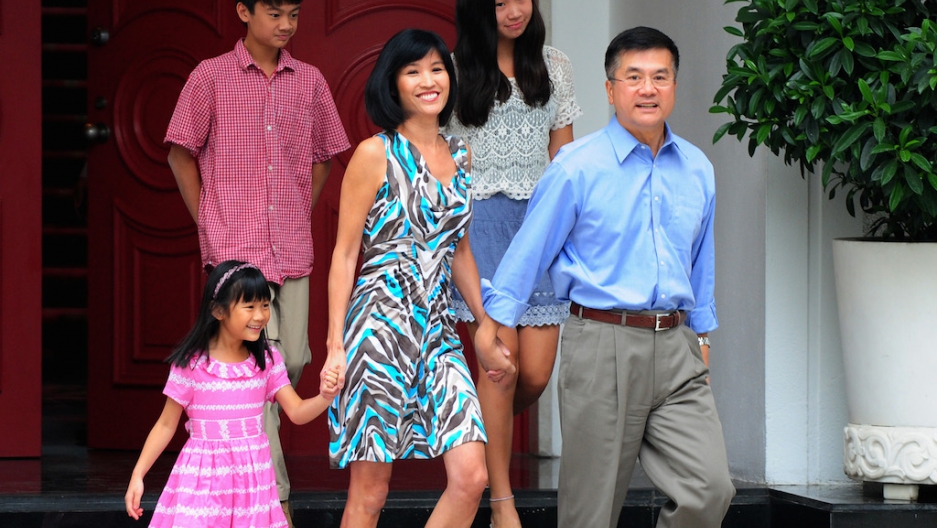 US ambassador Gary Locke and his family meet the press in China, in 2001. On his departure, a critique in China's official media called him a banana: yellow on the outside, with a white heart.
Credit: Mark Ralston
Share

HONG KONG — A Chinese newspaper’s attempt to lob a farewell stink bomb at the departing US ambassador has blown up squarely in its face.

After a Feb. 27 news conference for Gary Locke, who is leaving China after serving as the US ambassador for two and a half years, an op-ed in the official China News Service denounced him as a “banana man” with “yellow skin and a white heart.”

The article went on to suggest that his ancestors — Locke is of Chinese descent — would be ashamed of his service in the US government.

The ridiculous and racist piece generated a backlash within China as well as in American media. Thousands of Chinese on Sina Weibo, China’s Twitter, disowned the piece, calling it an “embarrassment” and proof of Locke’s unique power to irritate Chinese officialdom.

“This ruined the reputation of China and the Chinese government, and seriously damaged the international image of China’s national interests,” wrote Tong Zhiwei, a legal scholar. “I recommend they investigate the organization and publish the real author behind it.” The article included a byline, but pseudonyms are often used in China.

Hundreds of other commenters weighed in to register their disgust.

“Whoever wrote this article is really brainless and self-deluded,” wrote one reader. “Do you really think that Chinese people don’t deserve to know the real PM 2.5 readings that Ambassador Locke tells you? The ones sitting in the wasteful luxury cars can only be government officials.” (PM 2.5 readings refer to dangerous particulate pollution, which the US embassy has been publicizing in Beijing.)

Even before he landed in Beijing in 2011, Locke’s modest behavior — unusual among high-level Party officials — stunned Chinese. He caused a stir when he was photographed buying his own coffee and carrying a backpack, and when it was revealed he had flown coach class to Beijing. In China, he grabbed public attention by carrying his own luggage and waiting in line for an hour, just like other mortals, at the Great Wall cable car.

For these reasons, Locke became a folk hero of sorts — a living rebuke to the perceived excesses and corruption of Chinese leaders.  At the end of his tenure, 70 percent of 12,000 respondents to a Wall Street Journal poll of Chinese readers rated his performance as “outstanding.”

Locke's two and a half years were marked by several tense incidents. In 2012, the blind legal activist Chen Guangcheng fled to the US Embassy in Beijing, where he was sheltered until negotiations led to him being a granted a visa to the United States. That same year, the police chief of Bo Xilai also sought refuge in a US consulate.

One of Locke's biggest achievements was maintaining the embassy's policy of publishing accurate air pollution readings on Chinese social media, against the Chinese government’s wishes.

Still, even more than his concrete achievements, it was Locke's modest style, in contrast to the aloof grandeur of Communist Party elites, that left an enduring impression in China.

The fact that this American official was of Chinese descent only made him a more infuriating figure to the state-run media.

But the “scurrilous, racist, and incoherent” editorial merely highlights Beijing’s own irritation at Locke’s success.