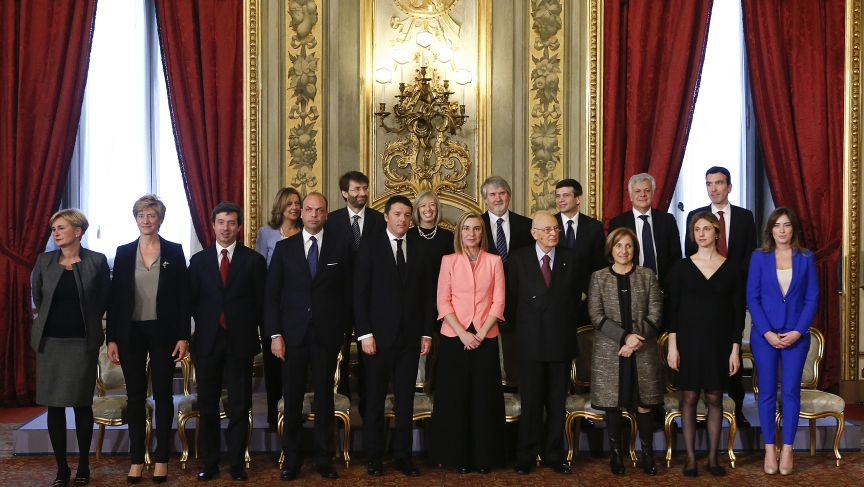 There's a country in Europe where a new prime minister has helped put gender parity on the agenda. But the country's female lawmakers want him to go much further.

That country is Italy, which is the answer to our Geo Quiz today.

The new prime minister's name is Matteo Renzi. And he's out to shake things up in Italian politics.  First of all, he's younger than your usual Italian leader. In fact, Renzi is just 39, the youngest prime minister in his nation's history. Contrast that with Italy's president, Giorgio Napolitano, who is 88.

Renzi is also not an elected member of Parliament, another departure from the past. He was the mayor of Florence before he ousted Italy's previous prime minister in an internal Democratic Party coup.

And Renzi came into office promising quick, big changes. The first thing he did was name his cabinet. And that's where he put gender parity on the agenda.

Renzi's Council of Ministers is the personification of perfect equality between the sexes, with an equal number of men and women. That's a first for Italy.

Next, Prime Minister Renzi turned to his top reform priority: changing Italy's electoral law. The new law would give an automatic bonus of extra parliamentary seats to whichever party gets the most votes. This would be a huge change for a country known for its myriad political parties, complex governing coalitions, and — as a result — crumbling and indecisive governments.

At the moment, about 30 percent of Italian lawmakers are women. That's the highest it's ever been in Italy.

The push for total gender equality in Parliament has the support of female lawmakers from across the political spectrum in Italy. But that wasn't enough to force the "pink quota" through. So the female politicians have written an open letter asking Renzi and all the other (male) party leaders to help pass the measure.

As of this writing, it doesn't look good.

By the way, if 30 percent female representation sounds low, consider this: here in the US, only 18 percent of the seats in Congress are filled by women. So Italy is already ahead of us on this one.

And no one holds a candle to Rwanda when it comes to women in politics. After the latest elections last year, women make up a whopping 64 percent of the Rwandan Parliament.