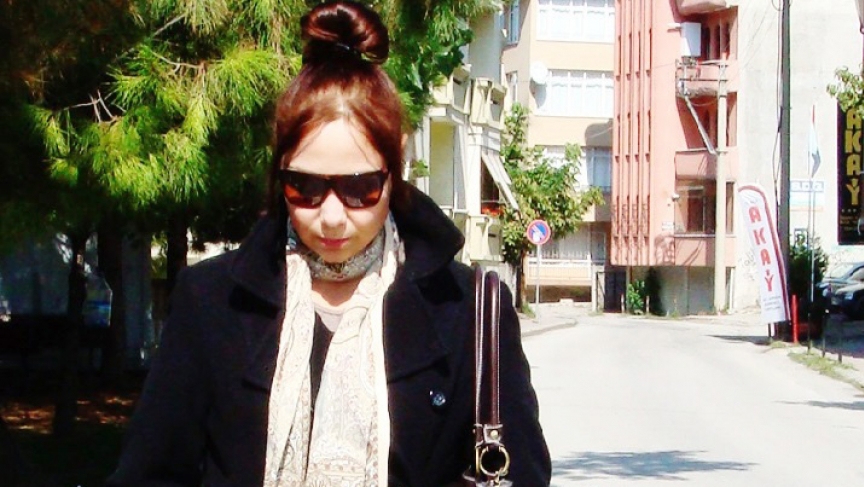 Salma is intersex, from Iraq, and worked with the US military as an interpreter there. After fleeing violence and threats in Iraq, she now lives in San Francisco with a volunteer host family.

In the kitchen of a San Francisco home, some serious dinner prep is underway. A slender woman with long reddish-brown hair, wearing a sleeveless polka-dot blouse, is busy with the appetizers.

Salma is in her thirties, Muslim, and from Baghdad. She speaks English quickly and easily, with a light accent. In college, she studied English literature, absorbing books and a language that her mom, an English instructor, taught her. Her mom would often burst out in song, singing a tune from ABBA, Salma recalls.

But life changed in the spring of 2003, when the war started in Iraq. Salma’s older brother began work as a translator for the US troops and he convinced Salma to sign up, too.

“I was with [the soldiers] when they got hit in Fallujah and I almost lost my life,” says Salma, who worked with the US military for more than five years. But the danger continued even after the war ended. Salma and her brother began to receive threats because of their links to the US.

Then, three years ago, Salma’s mother and older brother were murdered in their car. There was no investigation, says Salma, who asks that we use her first name only. She feared her life in Iraq would always be haunted by her association with America, so she fled to Turkey by bus.

In Istanbul, she was granted refugee status for her work with the US military and got approval to come to the US — a place where she could finally feel free — and not just from death theats in Iraq.

Salma is intersex. She was born with sexual anatomy that is both male and female. Salma identifies as a woman. She looks and sounds like a woman, and was considered female by the US military. But she was classified by Iraqi officials as male and felt ostracized.

In December, Salma arrived in San Francisco, where she now lives with roommates: Reuben Zellman and Erika Katske, a couple.

They met Salma when she arrived at their doorstep from the airport. It all happened pretty quickly, says Katske. Jewish Family and Children's Services (JFCS) of the East Bay, the resettlement agency handling Salma’s case, had just gotten notice that she would arrive soon. The agency put out a public request for housing assistance.

“We knew that this was something we could do. We had an extra room,” says Katske, who works as a community organizer in the Bay Area.

The couple is part of a small, pioneering program for refugees like Salma: people who arrive here alone, often because of their sexual identity, and could use extra support. JFCS of the East Bay created the program and designed it so that volunteers receive a small amount of rent from the newcomer and they, in return, help refugees with life here.

“I’m transgender myself,” says Zellman, a rabbi. “Although Salma’s story is very different from mine. I grew up in Los Angeles. But I do have some understanding of what it means to not be safe in the world and not really be welcome.”

Katske and Zellman have helped Salma with the tricky navigation of getting recognized officially as a woman.

“How do you change your name and gender? How is it appropriate to speak with a person whose gender you might not be clear on? What questions are okay to ask? Over the past 15 years, we’ve built up the infrastructure here so that people can get help with these questions,” Zelman said. “There didn’t used to be a form at the Social Security administration for gender change. Now there is and that’s something we want to make sure Salma knows about.”

Salma is still getting her footing, but you can tell she is starting to feel at home. “I’m lucky,” she says. “I realized they respect you, if you’re intersex, trans, whatever it is. They believe in you. This is the family.” She jokes that she even enjoys living with Zellman and Katske and their two dogs, Biggie Smalls and Otis.

After we talk, it’s back to cooking. There’s apple-pear cobbler, sweet potatoes, gravy and turkey. It’s not November, but Salma arrived in December and heard about the traditional feast she missed a month earlier. So she made a request for a “re-Thanksgiving,” as she puts it. Zellman busts open a bag of marshmallows for the sweet potatoes. Salma laughs and says, “Welcome to America.”

This is the second story in a two-part series about some of the challenges facing lesbian, gay, bixsexual, transgender and intersex (LGBTI) refugees in the United States.