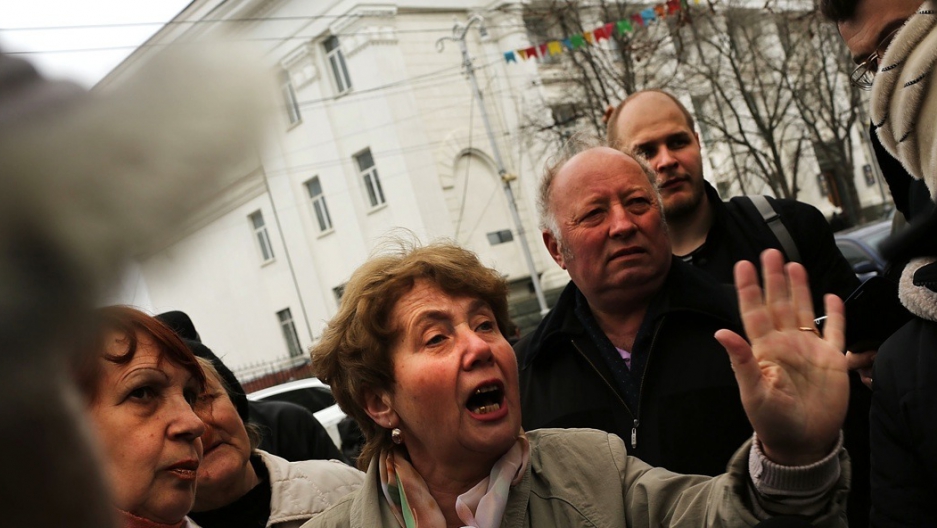 Pro-Russian residents fight with members of the media in Sevastopol harbor on March 7, 2014 in Sevastopol, Ukraine.
Credit: Spencer Platt
Share

SEVASTOPOL, Ukraine — Suddenly faced with the choice of remaining a part of post-revolutionary Ukraine or joining Russia, residents of the Ukrainian peninsula of Crimea are divided.

In Sevastopol, there’s no mistaking what the majority wants.

One day after the pro-Russian parliament here voted to join the Russian Federation and announced a referendum on the decision next week, protesters at a pro-Russian rally in this port city said they should have the opportunity to determine their own fate.

“All we want is to be left to live the way we want to live,” said Aleksandra Shepilova. “The West has its path, we have ours.”

Western countries have denounced the referendum, which would ask residents to choose between joining Russia or remaining a part of Ukraine with expanded local autonomy.

The United States and European Union say they won’t recognize the results of the vote, insisting that the new Ukrainian government must be involved in the process.

But Moscow’s actions are changing the reality in Ukraine daily. A week after the pro-Russian government of President Viktor Yanukovych was toppled following a wave of protests and clashes in Kyiv, Russian troops in masks and without insignia appeared in Crimea, securing border posts, surrounding Ukrainian military installations and ousting the regional government.

On Friday, the Russian parliament voted to back the referendum three days after Russian President Vladimir Putin said he didn’t believe Crimea would become part of Russia.

Ivan Komelov, a representative of the new pro-Moscow government in Sevastopol, said it was forced to move quickly on the referendum because of “colossal” pressure on the region from the new government in Kyiv.

Acknowledging that a vote for secession would isolate Crimea without the recognition of the international community, he said, “Sometimes, isolation is better than genocide.”

“It’s clear from the statements of the Ukrainian government that they will do everything to keep us as a part of the country and the Russian-speaking population will be practically destroyed,” he said.

But not everyone in Sevastopol agrees.

Maya, a tour-guide, balked at the idea that Russians were being threatened in Crimea.

“Everything has always been peaceful between Russians and Ukrainians here, but now there’s a new government and suddenly everyone is going to the square yelling, ‘Russia! Russia!’” she said, declining to give her full name for fear of reprisals. “But I guarantee you they are no more than 20 percent of the population.”

Although ethnic Russians form the majority in the region, about a third of Crimea’s population consists of Ukrainian and Tatar minorities. Both are increasingly worried about what will happen to them if the region suddenly becomes a Russian territory.

The autonomous Crimean Tatar parliament, or Mejilis, announced Thursday that it did not recognize the upcoming referendum and urged Crimean residents “of all ethnicities” to boycott it.

But in Sevastopol, Crimea’s largest city, residents say they’re enthusiastic to vote. The port has been a solidly Russian enclave since its founding as the base for Russia’s Black Sea Fleet in 1783. According to the 2001 Ukrainian census, more than 90 percent of Sevastopol’s population speaks Russian as a first language.

Although Soviet leader Nikita Khrushchev transferred Crimea from Russia to Ukraine — both then republics of the Soviet Union — in 1954, the Black Sea Fleet has remained here and is now blockading the harbor, trapping two Ukrainian vessels in an ongoing standoff.

Many observers say the fleet’s fate may be the real impetus for Russia to reclaim the region. Although Moscow agreed to lease the port and its facilities from Ukraine through 2042, many in the new government in Kyiv have expressed their desire to cancel the deal.

The port enables Russia to project its naval power into the Mediterranean Sea. Without it, the fleet would probably have to be drastically reduced.

Olga Timofeeva, an engineering professor at Sevastopol Technical University, says the port’s military history is an inseparable part of the city’s identity. It was besieged and largely destroyed twice: by British and French troops during the Crimean War, and by the Nazis in World War II.

“We are Russians, and this city sacrificed itself twice to fight ‘euro-integration,’” she said. “Those who carry the flag of [Ukrainian nationalist leader] Stepan Bandera are the same who wanted to integrate us with Europe before.”

Galina Grinyeva, a resident of Crimea. The population is increasingly divided over Russia's invasion. (Filip Warwick/GlobalPost)

Bandera has become a polarizing figure in Ukraine as a staple of propaganda on both sides. Many Ukrainian nationalist groups revere him as a liberating figure who fought a long resistance against Soviet annexation into the 1950s. However, his movement also sometimes collaborated with the Nazis and was implicated in the wartime massacres of tens of thousands of Jews and Poles.

Pensioner Leonid Lemenko said the referendum to join Russia is a simple case of righting history.

“What Khrushchev did was wrong, he illegally gave us to Ukraine without asking anyone here,” he said. “Could you imagine a US president just giving 2 million people to a different country?”

Oksana, meanwhile, says that although she considers herself Russian and wants to see Crimea break from Kyiv, she would prefer it to remain independent.

“All of our problems today are from the fact that we are a little piece of a big country and despite our autonomy, we can’t control our own lands,” she said. “If we join Russia, we’ll just be a small part of an even bigger country.”