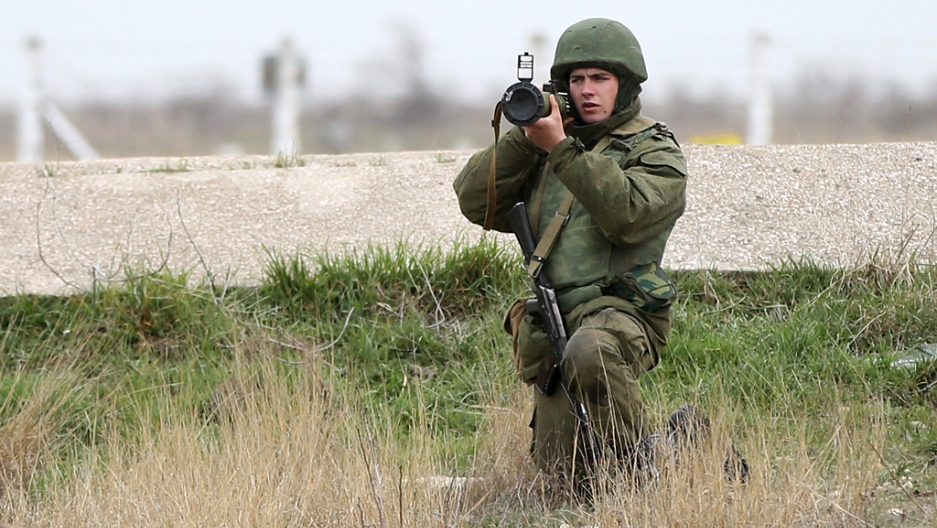 A soldier under Russian command aims a rocket propelled grenade launcher at a group of over 100 hundred unarmed Ukrainian troops who appeared at the Belbek airbase, which the Russian troops are occupying, in Crimea on March 4, 2014 in Lubimovka, Ukraine.
Credit: Sean Gallup
Share

BUZZARDS BAY, Mass. — “Right now, Russian special forces from the 22nd Brigade are in Ukraine, and we should expect staged attacks on Russian soldiers and citizens.”

Andrei Illarionov doesn't mince words. For the past few days, the senior fellow at the Cato Institute, a libertarian think tank in Washington, DC, has been telling anyone who would listen that Russian President Vladimir Putin is intent on an all-out war with Ukraine and isn't all that fussy about how he gets there.

In a telephone interview with GlobalPost this week, the 52-year-old Illarionov, who until 2005 was a key economic adviser to the Russian president, sounded the alarm about his former boss.

“[Putin] wants to overthrow the government [in Kyiv] and start a civil war,” he said. “Why not? The reality is that Obama and the rest of the world will do nothing.”

While the international community shakes its collective head disapprovingly and talks about sanctions, Illarionov insists that the benefits of invading Ukraine far outweigh the risks for Putin.

The Russian president is alarmed at events in neighboring Ukraine, where a wave of protests toppled the Moscow-friendly elected president and installed a more Westward-looking leader.

Analysts say Putin is determined, at all costs, to bring Ukraine back into Moscow’s orbit and, in the process, return the sunny Crimean peninsula — a traditional Russian elite playground the Soviets gifted to Ukraine in 1954 — back to Russia.

“He will have done what nobody else could do: He brought Crimea back,” Illarionov said. “The Russian people will be grateful. Putin will be in power forever.”

According to Russia’s Constitution, there’s no limit on the total number of years a president can serve. A leader is barred from more than two consecutive terms, which explains why Putin and his prime minister, Dmitry Medvedev, switched jobs for four years in 2008.

More from GlobalPost: Ukraine's crisis is a wake-up call for the West

Putin is now in his third term, and, at a fairly vigorous 61, shows few signs of slowing down.

So be prepared for some very dark days, Illarionov says.

The former Kremlin insider will not divulge the source of his information about the “spetsnaz,” or special forces, that he says are looking to stage provocations against Russians, but he is convinced that something is in the works.

Putin and his team will resort to what the former presidential aide said are the Kremlin’s tried-and-true methods: provocation, violence, and outright lies.

“Look at what has been done before,” Illarionov said. “Think back to Mainila, in 1939.”

Illarionov was referring to a border incident that resulted in the Soviet invasion of Finland, just weeks after the start of World War II. Soviet leader Josef Stalin wanted to annex Finnish territory to protect sensitive Soviet areas, specifically Leningrad, which was situated a mere 25 miles from the border.

Finnish soldiers during the 1939-40 Winter War against the Soviet Union. (The Library of Congress/Wikimedia commons)

On the evening of Nov. 26, 1939, Soviet forces shelled the Russian village of Mainila, claiming that the fire had started from the Finnish side.

The Soviets made the incident into a casus belli for the Winter War with Finland, which it launched four days later.

The fact that the Soviets themselves perpetrated the attack has been amply documented by historians like William Trotter and Robert Edwards, and is not seriously in question.

An apartment building in a southeastern Moscow suburb after a deadly blast in September 1999. (AFP/Getty Images)

Putin, then recently appointed Russia’s prime minister by an ailing Boris Yeltsin, blamed the attacks on Chechen terrorists, and used the incidents to launch a second war on Chechnya.

An earlier conflict, in the mid-1990s, had been extremely unpopular with the Russian people. But in 1999, with the images of blasted homes and dead children, Putin had Russians baying for Chechen blood.

Even at the time, there were many who suspected that the Russian security service, the FSB, was behind the attacks. Sergei Kovalev, a prominent human rights activist, helped form an unofficial commission to investigate, but his efforts were blocked at every turn. Commission members had a habit of getting arrested or killed, and no results were ever published.

Recently a book by John Dunlop, a senior fellow at Stanford University’s Hoover Institution, made a strong case for FSB involvement.

Putin, of course, brushed the accusations aside.

“Blowing up our own apartment buildings? … It’s totally insane,” he wrote in his 2000 autobiography "First Person." “No one in the Russian special services would be capable of such a crime against his own people.”

Illarionov, with all of his high-level government background, has no trouble believing it.

“[FSB involvement] is not a theory, it is a fact,” he insisted. “There is no other element that could have organized the bombings except for the FSB.”

So a similar PR exercise in Ukraine is fully to be anticipated, he maintains.

“I will not be sad if my forecast does not come true,” he said. “I would be happy.”

But he holds out slim hope for that. In an interview with Ukrainian television earlier this week, he skewered the “protest tourists” who, according to many, are being bused in from Russia to provide the illusion of support for Russian intervention, and the “titushki,” a term used for thugs and hooligans who according to the Russian media are at the forefront of the Ukrainian opposition movement.

But they are not the main problem, he said.

“It’s not just titushki, it’s not just Russian tourists who hang the Russian flag on various state buildings,” Illarionov told Ukrainian Channel 1+1. “These are groups of Russian special forces whose mission is to open fire on and kill Russian citizens and Russian soldiers in Ukraine.”

Putin has dismissed any suggestion that he has sent security forces to Ukraine. He told a press conference Tuesday that the bands of soldiers believed to be Russian who are roaming Crimea — now 16,000, according to Ukraine’s United Nations ambassador — are local “self-defense forces,” a claim that Illarionov, like many US officials, finds ridiculous.

“[Putin] just looks you right in the face and lies,” Illarionov said.

But Illarionov disagrees with recent assessments by German Chancellor Angela Merkel that Putin has “lost touch with reality,” or those by former US Secretary of State Madeleine Albright that he is “delusional.”

More from GlobalPost: Is Putin losing it?

“Angela might want to diminish Putin, but it is not so,” he said. “Putin has a very clear, strategic mind. His approach is to insist that he is right, and impose this viewpoint on everybody else. He understands very well what is going on. I would say he is in pretty good shape.”

Putin remains highly popular in Russia; a recent poll gave him a 65 percent approval rating, which should make him the envy of many Western leaders.

Such results can be deceiving, Illarionov says.

“Of course he is not popular with normal people,” says the ex-adviser to the Kremlin. “But Russians have become crazy. It seemed simple: tear down the Iron Curtain and people would be well informed, and make the right decisions. But there is a kind of brainwashing that happens. You don’t need an Iron Curtain to be zombified.”

More from GlobalPost: These are the 8 options Obama has for the conflict in Ukraine