Carine and Gertrude have been together for several years now. They're in their 30s, with a daughter. They’re also from Cameroon, where it’s illegal to be gay.

"[In Cameroon] you have to hide who you are. [People] can go and make a denunciation and the police will come and arrest you," says Carine. For safety reasons, they've asked to only be identified by their first names.

Carine has friends in Cameroon who were jailed for being gay, so she and Gertrude hid their relationship. But Gertrude was an activist in Cameroon — raising awareness about HIV and AIDS in their country — and she made a bold move: she appeared in a documentary called “Born This Way.” It’s about Cameroon’s small gay rights community.

In one scene, Gertrude talks about how she was gang raped for being gay. The film wasn’t supposed to be seen in Cameroon. But bootleg copies were circulated throughout the country — just as anti-gay activists gained strength.

Carine remembers how her family reacted when they found out she was gay.

"The family used to say, 'Why are you saying that you’re homosexual? What do you want to prove? You have to stay in the dark.' They say that is something that comes from Occident, from Europe, from America.”

When Gertrude went to LA last year for a screening of the documentary, the situation came to a head. Carine called from Cameroon with bad news: There had been death threats and one of their friends had been murdered for his activism.

So Gertrude stayed in California, and Carine was recently able to join her with their baby daughter. The three of them are now living in a homeless shelter in San Francisco's Tenderloin district — one of the city's roughest neighborhoods. But in the US, they explain, they are able to live their lives openly. 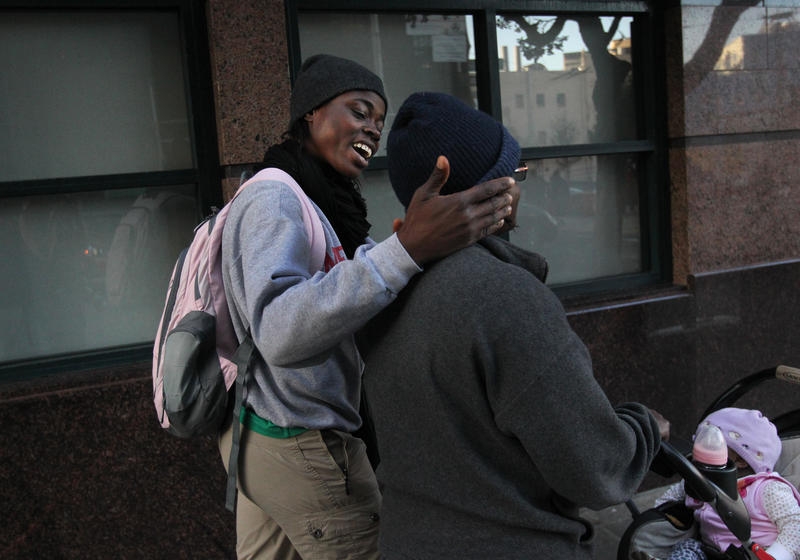 Carine and her partner Gertrude, who were persecuted for being gay in Cameroon, push their daughter down the street in San Francisco's Tenderloin district. The two women have been granted asylum in the US.

"We kiss in public. I take her hand. We walk together. That was impossible in Cameroon," Carine says. "When you see your baby smiling in the morning, it's like a beautiful day." Gertrude gave birth to their daughter, using donated sperm.

They know not everyone gets the chance to start over.

"Gertrude and their family, in some ways, are actually quite lucky compared to many other asylum seekers. They were gotten out, and gotten out fast. Most other cases are left in limbo for months or for years," says Leila Roberts with the Organization for Refuge, Asylum & Migration in San Francisco. But she also points out that people like Gertrude and Carine can face extra hurdles once they’ve landed here.

"If you’re an LGBT refugee or asylum seeker, you’re not going to come in with a ready-built community, because you cannot turn to your fellow country people," she says.

And that’s how Carine and Gertrude feel. They're reluctant to seek out other Cameroonians in the Bay Area and risk facing discrimination all over again. Another hurdle: Gay refugees are often drawn to cities, and that means high living costs.

So, Gertrude and Carine are taking it day by day, spending most of their time at the public library, where their daughter can look at books.

Next on the list, says Carine, is finding a place to live.

"[We want to] be out of the shelter and have our home, where we can have our baby girl grow normally," Carine says.

Gertrude is looking for a job as a security guard, but what she really wants to do is continue pushing for gay rights back in Cameroon.