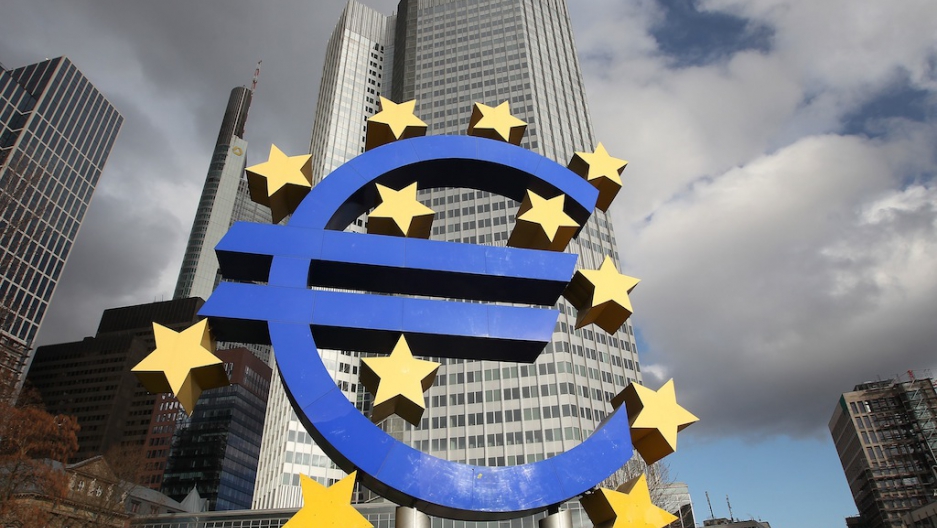 The Euro logo is pictured in front of the European Central Bank (ECB) in Frankfurt/Main, Germany, on February 6, 2014. European Central Bank chief Mario Draghi said Thursday that the euro area is not experiencing deflation -- or a widespread fall in prices -- even though inflation is very low.
Credit: DANIEL ROLAND
Share

The Court’s majority suggested that the ECB lacks the legal authority to help out lagging Euro members such as Italy and Spain by buying en masse member state bonds.

President Draghi’s pledge, issued at the height of the Eurozone crisis, is widely seen as having helped to stabilized the Euro, so much so that the ECB never engaged in a bond buying spree. Germany’s Constitutional Court ruled, nonetheless, that any bond buying program would have to be limited.

Later, it required the German government to do everything in its power to defend the rights of German states, and it brandished the threat of overrule if the Europe’s Court of Justice did not hew to the limits of the power states were delegated in the Maastricht Treaty. The Constitutional Court is yet to carry out these threats, perhaps because the desired changes occurred in their wake.

It is a good thing when Supreme Courts protect individual rights and check and bolster the constitutionality of international law. But courts usually do not get involved in financial crises, for good reasons.

John Maynard Keynes once likened the stock market to a beauty pageant where the rational actor wins not by picking the most beautiful and talented contestant, but rather by picking the contestant that “average opinion” is likely to see as beautiful.

Judges have no idea what the market will find beautiful, and the slow nature of the legal process does not allow judges to helpfully send confidence building signals.

Luckily the German Constitutional Court’s ruling is so vague that there is little real concern. The proponents of tight monetary policies are suggesting that the Court’s ruling is a real threat to worry about. As long as the Court of Justice suggests but does not define limits, Germans can reassure themselves that someone is drawing the line somewhere. This is the most likely outcome, if only because Draghi’s actions were so successful in stabilizing the Euro.

The partisans supporting a tight monetary policy are looking for political allies wherever they can find them. The real risk concerns the spector of ongoing litigation. Litigants are likely to continually return to the German Court to challenge ECB policies they dislike. The court invited these appeals by inserting itself in the Euro debate, something the minority opinion wisely noted would be unwise.

How to best defend the Euro is a complex issue on which bankers, politicians and businessmen disagree. Judges are not economists, and they are fundamentally unable to make snap decisions and do what is needed to keep the world’s economy afloat.

Karen J. Alter is a professor of political science and law at Northwestern University and the author of The New Terrain of International Law: Courts, Politics, Rights.