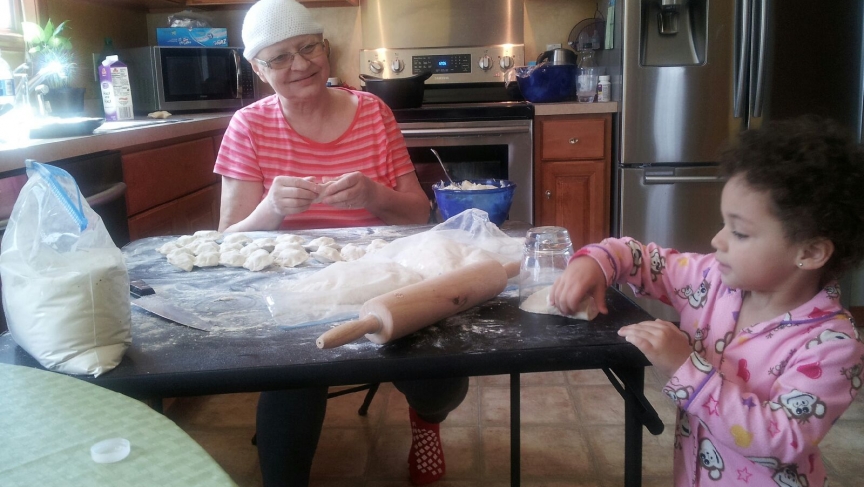 Katarzyna Ploszaj is the chef and co-owner of Petit Oven, a restaurant in Bay Ridge, Brooklyn. The restaurant serves French-American food, although Plosjaz was born and raised in Poland.

Polish food is still close to her heart: she grew up on her mother’s pierogies — little stuffed dumplings filled with all kinds of goodness.

When Plosjaz was 5, her mother, Ela, left Poland for the United States. That was in 1982. Poland was still a communist state under the control of the Soviet Union. Ela arrived on a visitor's visa and was allowed to stay. But Katarzyna and her sister couldn’t go to the US with her.

"We couldn't get a visa," says Ploszaj. So they moved to a small farm to live with their mother's parents, their grandparents. It was a small Polish village, with no more than "14 households," she says. "It was small."

"My grandmother, she never threw a piece of food out. Because she remembered days during the war when their was nothing to eat."

That lesson still held in the early to mid-1980s, when Poland labored under martial law and Soviet control. "It was still very hard to get food. Communism was breaking up at that moment; things were starting to change, but I still remember my grandparents lining up to get stamps for, let's say, a kilo of kielbasa."

Living on a farm made things easier. If you could grow your own food or raise your own animals, recalls Plosjaz, you could survive more easily.

In 1987, Katarzyna and her sister finally moved to the United States, where they were reunited with their mother, Ela. "And we started enjoying her food again, her fabulous food, her amazing pierogies." Ploszaj says she tried many times to get the recipe, especially for the potato and cheese variety, but her mom never really had one — it was all about touch and experience: a little more water, or a little more flour.

Sometimes, Ela would come to make pierogies for Petit Oven, her daughter's restaurant. "She'd do 50 dozen in a couple of hours, like a machine. Boom boom boom."

Ela Ploszaj passed away recently: her pierogies are deeply meaningful to Katarzyna. "I still have a couple bags in the freezer," she says.

"I think the role that food played in my mother's heart was just being a mother. We celebrated it, and celebrated life."