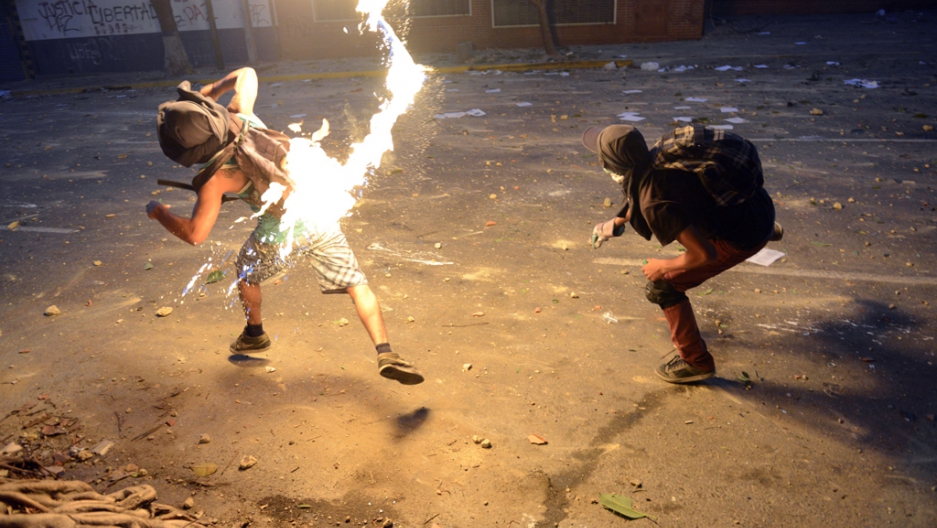 An opposition activist hurls a molotov cocktail at National Guard troops during a protest against the government of Venezuelan President Nicolas Maduro, in Caracas.
Credit: LEO RAMIREZ
Share

CARACAS, Venezuela — Tear gas canisters rocket into the sky like signal flares and explode in mid-flight. The protesters’ wall of improvised riot shields collapses, a useless defense against the insidious weapon.

One rioter wearing a Coke-bottle-turned-gas mask picks up a nearby canister, its contents still billowing. He runs it toward the police line, returning it back over their riot shields. Hitting his target he removes his mask and roars a chant, joined by his fellows. “The government will fall” echoes through the streets of Caracas.

Nightly riots like this one have left scars on Altamira, an opposition-strong district of the Venezuelan capital. Burnt asphalt, battered brick walls and graffiti-covered buildings are marks of countrywide demonstrations that have claimed more than a dozen lives. The protests aimed at ousting President Nicolas Maduro are entering their fourth week and show no sign of abating.

In stark contrast, Maduro on Wednesday relished fresh shows of support as red-clad followers filled the streets to mark one year since their leftist hero, Hugo Chavez, died of cancer. Anti-government activists refrained from calling counter-marches, but their road blockades in opposition districts choked the capital’s already-nightmare traffic, forcing cars onto sidewalks and hurling rocks at passing police patrol vehicles.

More from GlobalPost: 5 myths about Chavismo and the Venezuela crisis

As Wednesday evening approached in the Altamira district, a first attempt at dialogue between anti-government protesters and riot police temporarily calmed the streets. But that mood deteriorated when some opposition activists began to hurl rocks and direct lit fireworks at the police line from their flaming barricades. Police quickly hit back and secured the plaza before nightfall.

“Our biggest mistake has been that we’ve run away at the sight of face to face conflict,” one rioter holding a Molotov cocktail said during a recent night’s rally. “If we want to achieve our goal of toppling this government then personal sacrifice is going to be vital.”

The prospect of being detained by the Venezuelan authorities is not an attractive one. Reports of police brutality spread through news wires and social media are shocking, but hard to verify.

This district’s riots occur on the 800 yards connecting the Plaza Altamira with Caracas’ main freeway. The protesters’ nightly attempts to obstruct rush-hour traffic are blocked by riot police armed with water cannons, lasers that blind temporarily and tears gas that creeps into homes for miles around.

The protests start about half an hour before sunset at around 5:30 p.m. The police generally take the plaza by about 9 p.m., and the streets quiet down and empty by 10 p.m. But sometimes the clamor goes late into the night.

“I’m sorry that my actions are costing your precious sleep, but your indifference is costing me my precious country,” the rioters retort to frustrated residents who shout at them from windows. However, the neighbors here are mostly cheering the protesters on and many are called upon to participate.

More from GlobalPost: Who’s who in Venezuela's political crisis?

Besides their makeshift gas masks, demonstrators now come equipped with a milk of magnesia-filled spray bottles, vinegar-soaked rags and toothpaste to smear across their faces, all of which they say help to counter the excruciating effects of tear gas.

“The gas makes it very difficult,” says one protester wearing a Guy Fawkes mask painted with the Venezuelan flag. “They seems to have an unlimited supply and even with the masks it burns your skin.”

The rioters’ front line — a Roman army tortoise formation of corrugated metal shields — moves steadily toward the authorities. Runners supply rocks and concrete lumps gathered from a nearby abandoned building site wall, which continues to disintegrate through the course of the riots.

Running from the munitions quarry to the front lines, the suppliers pass lampposts where the protesters hammer out rhythms of dissent. Demonstrators with smartphones tweet the proceedings — #SOSVenezuela is their defining hashtag.

They string black metal wires at head height across the streets to snare attacking waves of police motorcycles.

Behind police lines, the files run five officers deep. A commanding officer shouts into his megaphone and patrols the tightly packed ranks, directing the onslaught and maneuvering his troops forward. As the thunder of concrete on riot shield drowns out the protesters’ chants, a single officer stands on the outer edge of the wall, filming events with a handheld camcorder.

The entrances of apartment buildings along the street are packed with their residents who observe the advancing police lines in stony silence. Those who remain within their homes watch from behind curtains while the braver ones hurl glass bottles at the security forces moving into territory cleared by tear gas.

The protesters stand on their main barricade, hurling Molotov cocktails at police officers advancing out of the gas fog. The cops catch some demonstrators and hold them face down on the road to later haul them off to jail.

The barricades are quickly dominated by the police, who force the protesters back to the plaza. Once at the four-way junction, the remaining dissenters are easily dispersed by police motorbikes waiting in the wings.

In control of the Plaza Altamira once more, the police set out to carve lanes through the rioters’ smoldering barricades, which are certain to be reconstructed by protesters ahead of another night’s action.

The rioters, having failed to hold the plaza, head back to their homes across the capital. “See you all tomorrow night,” one of the departing protesters shouts. “Wouldn’t miss it for anything,” reply his companions, heading their separate ways to mend their wounds, tweet their stories and think about how they can do better the following night.

Note: This story is an updated version from Wednesday's report with the same headline.

More from GlobalPost: Venezuelan expats are tweeting the way for embattled protesters

[View the story "The view from Venezuela amid protests" on Storify]